Student at Midtown School of Science and Technology (formerly)

Sketching people in crisis.
Being with Peter Parker (formerly).

Fall in love with Peter Parker.

Help Spider-Man defeat Mysterio.
Help Spider-Man and Doctor Strange return the visitors to their universes.
Graduate from Midtown and enter M.I.T. (all succeeded).

Midtown School of Science and Technology:

She is a student at Midtown School of Science and Technology and the love interest and ex-girlfriend of Peter Parker. After Doctor Strange cast the memory spell, MJ, along with everyone else in his life, forgot Peter Parker entirely, though unlike Ned and Happy Hogan, she vaguely recalls knowing him.

She is portrayed by Zendaya, who also portrays Rocky Blue in Shake It Up, Halley Brandon in Frenemies, Zoey Stevens in Zapped, K.C. Cooper in K.C. Undercover, Rue Bennett in Euphoria, and Chani Kynes in Dune, and voices Meechee in Smallfoot.

Dave McNary, writing for Variety, used the surname "Jones" for the character in an article about Spider-Man: Homecoming.[1] Secondary sources subsequently commonly list her surname as "Jones", despite the name being unofficial.[2] In Spider-Man: Far From Home, a view of the character's passport shows only the mononymous name Michelle.

MJ is snarky and coy, but also kind and friendly. She often acts as the voice of reason, and she provides the troubled Peter with much-needed comfort and advice.

She also seems to be one of the smartest students in the class, as the only one figuring out Peter's identity by herself, and feels embarrassed that the rest of the class haven't figured it out.

Michelle Jones-Watson was born on June 10th, 2001 in New York City, New York to unnamed parents, and has mentioned that her father left the family before returning at some point.

Michelle "MJ" first appears as Peter Parker's classmate, when Peter is at the school office. She sketches him, as she claims to like sketching people in crisis. She meets Spider-Man when he is about to save his classmates from dying in a elevator crash. Later, after Liz Toomes moved away, Peter and MJ develop romantic interest in one another.

While MJ is not directly shown in Avengers: Infinity War, she is among those killed by Thanos in the Snap. However, MJ was brought back to life when the Hulk undid the Snap in 2023.

Eight months after the revival, dubbed the Blip, the class goes to Venice on a school trip. Unbeknownst to MJ, Peter Parker tries to romance his way in on her on the plane. However, Peter's plan backfires. Later, in Venice, Peter tries to tell her that he is in love with her. However, MJ reveals that she knows that he is Spider-Man and is similarly interested in him. She also plays a key role in foiling Quentin Beck's drone attacks by revealing that the Elementals are a ruse through a dropped projector. Because of this, Beck created the Elemental Fusion to kill Peter and his friends to protect his secret. Peter defeats Beck, but afterwards, Beck's crew sent doctored footage of him in the battle to frame Peter for the destruction and reveal his true identity to The Daily Bugle, which MJ also viewed together with Peter.

With Parker's identity exposed, he and MJ attempt to resume their normal lives, but this was thrown into jeopardy when Peter sought help of Doctor Strange to make the world forget his identity as Spider-Man. This resulted in visitors from other universes being sent to the MCU, she and Ned worked with Peter to track down and capture the rogue visitors, but then went against Strange in order to try and redeem the visitors instead of sending them to their deaths.

Ultimately, the majority of the visitors would betray MJ and her friends, who then encountered other versions of Peter from alternate universes. MJ and her allies successfully sent the visitors back to their home universes, but tragically, instabilities in spacetime caused by Doctor Strange's spell meant that MJ had to forget her entire history with Peter. The two shared a farewell kiss before MJ's memories were erased, and she resumed her new job as a barista. Sometime later, Peter visited her and Ned where she worked and gave them the letter detailing who he was and meant to them. Ultimately, between seeing a cut she gained at the Statue of Liberty still on her cheek, she and Ned had gotten into M.I.T. (which, due to their affiliation with Peter, had been rejected) and both generally appeared safer away from him, Peter renages on his promise to give them back their memories of him and leaves the shop, though not before MJ regains enough memory to realize she knows the stranger from somewhere.

"Too late. You guys are losers." 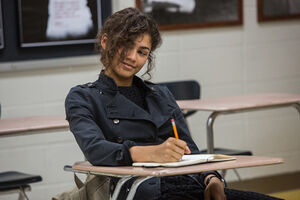 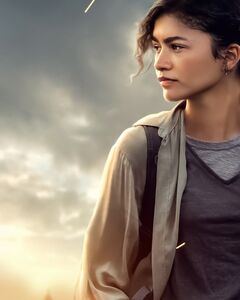 MJ hugging Peter after he managed to defeat Mysterio.

MJ explaining how she came to help Peter.

MJ and Peter sharing a kiss.