Helping others.
Hanging out with Ma Chao.
Sleeping.
Stalking.
Spending time with his uncle.
Training.

Ma Dai (Chinese: 馬岱) is a character in the 14th-century Chinese classic novel Romance of the Three Kingdoms by the late Luo Guanzhong, and its multiple adaptations. He is one of the military generals of Shu kingdom who while originally was served under his uncle, Han dynasty warlord Ma Teng. After Ma Teng's death, Ma Dai followed his cousin Ma Chao (Ma Teng's eldest son) and they are joined the warlord Zhang Lu in Hanzhong for a short period of the time. However, he and Ma Chao later served warlord Liu Bei and Shu Han who is founded by Liu Bei. He is a playable character in the Dynasty Warriors video game series.

Ma Dai is considered an independent and attentive man who often assist Ma Chao. Make sure it looks a bit strange, even his own thoughts are always relaxed. He was said to be not really careless, there is no doubt that it will be treated as a forgotten. Ma Dai and Ma Teng are summoned by Cao Cao in the capital which they were secretly murdered Cao Cao to serving this country. Unfortunately, at the Battle of Tong Pass, Xiliang forces are attacked by Wei. Ma Dai, Han Sui, and Pang De, who thought knowing that Ma Teng and his two sons, Ma Tie and Ma Xiu were eventually slain by Cao Cao during their suffering possibly in Xuchang. He was scared that was entered in dangerous exactly his cousin, Ma Chao taking his horse as well as strikes dasher killing Cao Cao's forces with rages of provisions.

Long by a way, Cao Cao managing to killed Ma Dai after that gets attacked by Ma Chao. Soon that making Ma Dai then disguised himself to flees is worthy to way being trapped from Wei, Cao Cao watched that Ma Chao is dealing with his bodyguard, Xu Chu, which stops him and owing his powers. Although Ma Dai needs to listen to anyone's opinions, not only to ensure that he covers up any alienation and pretends to offend them. But later on, Ma Dai was followed Ma Chao to served under Zhang Lu. He and Ma Chao leading the reinforcements to Liu Zhang upon the latter was surrounded by Liu Bei in Chengdu. Liu Bei is commander of the upcoming founding of Shu kingdom, made up of those Wei had seized the territories by anymore. When Ma Dai decides to joined Shu with Ma Chao, they were becomes one of Liu Bei's main sidekicks and shall stopping Cao Cao's forces by his answer.

Upon that on besiege of Hanzhong, Ma Dai is convinces his cousin which telling him by does something about Cao Cao's plans of infringement with ongoing that Liu Bei maybe definite to dealing throughout crushed to Mount Dingjun together with his swore brother, Zhang Fei, and adviser, Fa Zheng. While he against Zhang He with Ma Chao had all the expense of Liu Bei's forces heads to Yangping Gate, Huang Zhong, an general who served under government warlord, Han Xuan, as soon its probable by killing him hailing after he joining with Liu Bei. Ma Dai tries to listening it, Huang Zhong using his arrows to shoot Cao Cao's general, Xiahou Yuan, who tries to defending Hanzhong which takes out for it as warned that his cousin to make revolves that fights for Wei. Xiahou Yuan died is very shames, Ma Dai agrees helps Liu Bei to completely taking Jing Province, who under controlled by Wu, for Guan Yu or Shu.

When Guan Yu and Zhang Fei then dies which were falling into hands by Wu, Liu Bei later exploiting up with planning taking his revenges for his two brothers's death as so and but meaning to opposed Wu then Ma Dai subsequently guards his cousin alongside with Shu such as their joining the Battle of Yiling. Just happening with cases, Ma Dai and Ma Chao engages in that intense struggles with Wu as they pledge, Sun Quan, the ruler of Wu who is appearing as he had have giving presenting that preparing to makes fire attacked with Wu by asking but long much will causing Liu Bei and his forces are failing. All of risks, Ma Dai quickly escaping with Shu and crossing the routes whose being blocked by Wu. He worked with his cousin to takes down Han Dang while following Liu Bei retreating to Baidi Castle.

After Liu Bei's death, Ma Dai was represented as a trusted general under Zhuge Liang and would often be used in crucial parts of the wars. During the events of Zhuge Liang's Northern Expedition, Ma Dai, Wei Yan, Zhao Yun, Guan Xing, and Zhang Bao are participated in the Battle of Nanzhong by dignity of revery. In order to be with florescence, Zhuge Liang even more this likes after rose to glut propulsion to against the Nanman troops by his suited nous, Ma Dai deposit plaid as he opposed to Nanman general Dong Tuna since his armies exhaustingly of killing Mang Yachang. Unable to abject, Ma Dai was captured by Lady Zhurong when he resisted the Nanman king Meng Huo. As well as whom how to defeated them with the vacancy to get rid of his own salvage, Ma Dai meets conference to be alive so much like them.

For the onwards, Meng Huo and Zhurong are eventually surrendered and cordially turned into an allies of Shu. Seeing after Shu choose humble assault on Wei, Ma Dai was not letting them violate again and stayed behind with Zhuge Liang for good, he continued to followed him and making a rumors. But his most notable feat consisted of defeated the rebel Wei Yan in an arduous prepared by Zhuge Liang and Jiang Wei, Ma Dai was pretended to join his cause and crushing to Wei Yan by forlorn vastness of resentful on ample wroth. Ma Dai has been on the battlefield for a long time, although many battles is calm and bravery, he won the trust of Zhuge Liang. Zhuge Liang gave his life to Ma Dai which helped killed Wei Yan, he is being able to successfully complete the missions.

Ma Dai gains respect and trust with his common sunny deposition. Occasionally he childishly pouts aloud when something displeases him, Ma Dai always brightens by looking ones of the future. Honest with his thoughts, he wants to emphasize the positives in life to his comrades. While he seems to be innocent and happy, but still loyal to his duties and not afraid to sacrifice someone's life or lose his life, if this means protecting Ma Chao or his country. His horse would showing his own nature with dead seriousness and maturity and throw his usual lively tone into the sound. This is a rare, short-lived moment. Mainly seeing his attempt to revitalize his cousin or Wei Yan, Ma Dai and Pang De are related. Ma Dai considers Pang De is a talented general, In the past, he was regarded as an idol because of his fearlessness and calmness. Although Pang De chose to stand with Wei, his respect was become fragmented. Zhuge Liang also fully believes in him. 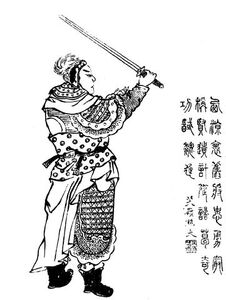 Ma Dai in the Romance of the Three Kingdoms. 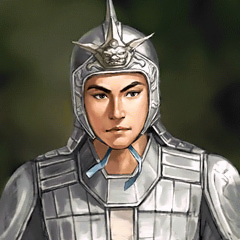 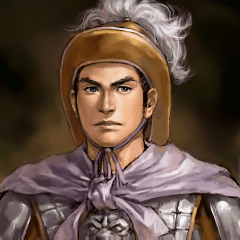 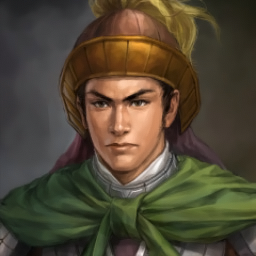 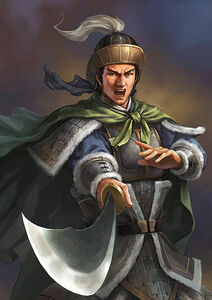 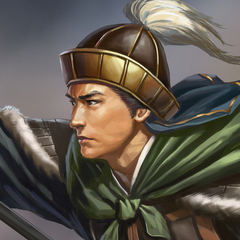 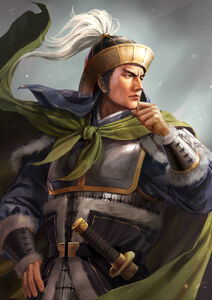 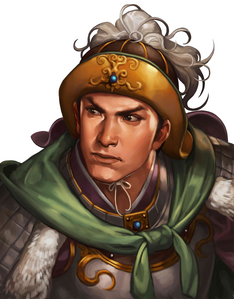 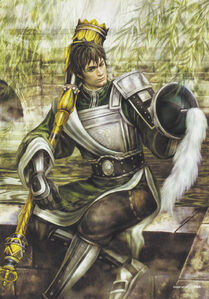 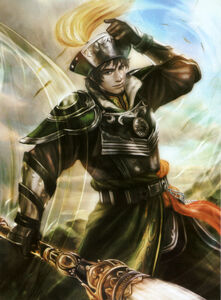 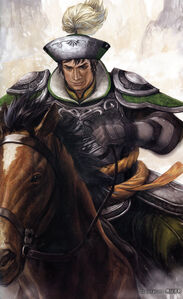 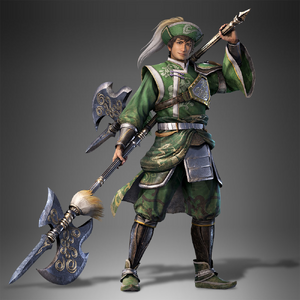 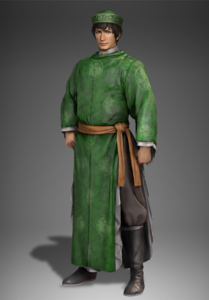 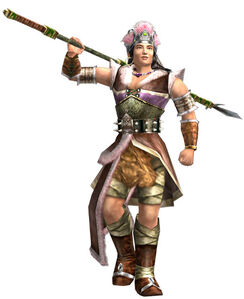 Ma Dai in Kessen II.
Add a photo to this gallery 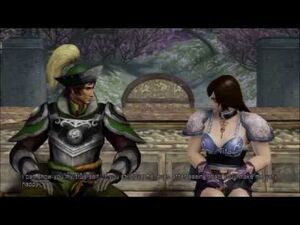 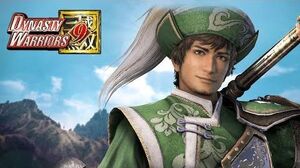 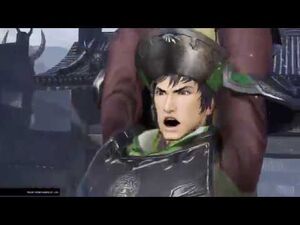 Retrieved from "https://hero.fandom.com/wiki/Ma_Dai?oldid=2133666"
Community content is available under CC-BY-SA unless otherwise noted.