Avenge the death of his wife and son (succeeded).

Macduff is the main antagonist hero of William Shakespeare's Macbeth, with Macbeth himself being the villain.

He is the Thane of Fife and is the first person in the story to deduce that Macbeth is responsible for killing King Duncan. Thus, instead of attending Macbeth's coronation as king of Scotland, Macduff goes to England, where he convinces Malcolm, Duncan's estranged son, to return and reclaim the throne from Macbeth.

Meanwhile, Macbeth is told by the three witches to beware of Macduff, while being told at the same time that no man of woman born can hurt him and that will remain king until the Birnam Wood comes to Dunsinane Hill. Macbeth responds to this warning by having his thugs murder Macduff's wife and son. Macduff is devastated when he learns of this, and it encourages him all the more to make sure Macbeth is killed.

Malcolm and Macduff's forces use branches from the trees in Birnam Wood as camouflage as they march up to Macbeth's castle at Dunsinane, fulfilling the first half of the witches' prophecy of Macbeth's downfall, and when Macduff confronts Macbeth, he reveals that he was born through a cesarean section and thus is not "of woman born", fulfilling the other part of said prophecy. Macduff kills Macbeth and presents his head to Malcolm, who is now king of Scotland.

Macduff is technically the only hero in a Shakespearean tragedy who is successful in his endeavors (though he loses his family, so it isn't exactly a happy ending for him). This is because the tragic element in Macbeth is the downfall of Macbeth, who wasn't always evil.

In the opera adaptation, Macduff is a tenor. 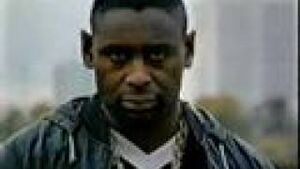 Retrieved from "https://hero.fandom.com/wiki/Macduff?oldid=1858423"
Community content is available under CC-BY-SA unless otherwise noted.