The Legend of Heroes: Trails of Cold Steel

Prove himself better than nobles (formerly), Uncover the mystery of the old schoolhouse (succeeded)

Machias Regnitz is one of the main protagonists and playable characters of the video game tetralogy The Legend of Heroes: Trails of Cold Steel. He is a student at Thors Military Academy and the vice-president of Class VII. A hot-headed young man with a deep-seated grudge against nobles, he is also the son of Carl Regnitz, the first commoner ever to hold the title of Imperial governor, and a member of the academy's board of directors.

He is voiced by Takuya Sato in the Japanese version and Edward Bosco in the English version.

In Trails of Cold Steel, Machias maintains a formal appearance with his standard-issue Class VII uniform. The jacket is buttoned up at all times while wearing a black undershirt and black pants. He has distinctive green hair, and wears a pair of elongated, hexagon-lensed glasses.

In Trails of Cold Steel II, Machias's civil war outfit consists of a light blue jacket in place of his red Class VII jacket. While retaining his lower attire, on his new jacket is a red Thors Military Academy armband on his right sleeve.

When first introduced, Machias' most defining trait is his strong hatred of all things nobility; he is initially strongly opposed to sharing a class with nobles, not wanting to spend two whole years surrounded by "arrogant, stuck-up hedonists", as he calls them. This immediately puts him at odds with Jusis, who being from one of the Four Great Houses is about as noble as they come. When Jusis claims he hasn't got any room to talk since his father is the Imperial governor, Machias refuses to listen, saying that his father earned his title through years of "hard, honest work" while nobles have their titles handed to them from birth, which is just one more reason he can't stand them. He also prefers coffee over tea, as tea is a drink he commonly associates with nobles, who he often sees sipping it arrogantly. Besides nobles, Machias also hates being lied to; when Rean reveals the truth about his social class to the others, Machias acts as though Rean outright lied (in reality, this is only half-right; Rean said that he didn't have a drop of noble blood in him- he never said he wasn't adopted) and the two remain on rocky terms until their next field study. He even goes so far as to say he can't trust people who lie to him

Machias is also very hot-headed, being by far the most prone to losing his temper among his classmates, which is just one of many things Jusis gets on his case for. He is also very competitive; besides his bickering with Jusis, he has a heated rivalry with Emma due to her being the only person to one-up him during the entrance exam, telling her that she should be prepared to rank second in their next exam, though they ultimately end up tying for first. Emma, for the most part, doesn't seem to mind, instead seeing it as a way to motivate him. This competitive nature stems from a desire to prove himself better than nobles, and likely to follow in the footsteps of his father, who is the first commoner to earn the rank of Imperial governor. Although generally serious, Machias can also be quite sarcastic at times; when Sara explains Crow's reasons for joining Class VII (namely, that he failed a few of his courses last year and begged Sara to help him because they wouldn't let him graduate), Machias states that that's "an even more pathetic reason than [he] was bracing [himself] for."

Despite his flaws, Machias is ultimately a good person at heart, and generally gets along very well with his fellow commoners. He is very humble, both about his high intelligence and his father's status, especially since arrogance is one of the reasons he hates nobles, and insists that even if his father is the Imperial governor, he is still a commoner through and through. He is also very studious, spending much of his free time studying and claiming there's no such thing as being "too prepared." As such, he frequently gets on Fie's case due to her tendency to slack off, though Fie, for her part, is annoyed by this, calling him a "stubborn old nag." In his spare time, he also enjoys playing chess, being a member of the Chess Club.

While Jusis suspects Machias' hatred of nobles to be due to his father's status (he has a high position in the Reformist Faction, which is in constant conflict with the Noble Faction), the reality is far more tragic; when he was a child, he had a cousin that he looked up to as an older sister, who fell in love with a kind-hearted noble. Unfortunately, after they got engaged, the noble's family went out of their way to undermine their relationship. Machias' cousin ended up broken by the entire thing, but she never turned to anyone for help, and ultimately it became so crushing that she took her own life. Machias, having never liked nobles much to begin with, grew up despising them, as well as the entire idea of social classes. By the time he opens up to his friends about this, however, Machias has grown to realise that he was simply looking for someone to blame for his cousin's death, and that getting to know Rean and Laura has helped him realise that there are nobles who live up to their name. He also now understands that, in the end, everyone involved in the incident ultimately had good reasons for what they did; he was just too bitter to see it. 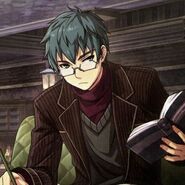 Ultimate Shot
Add a photo to this gallery
Retrieved from "https://hero.fandom.com/wiki/Machias_Regnitz?oldid=1860858"
Community content is available under CC-BY-SA unless otherwise noted.