Seer of Dropped Items (by herself)

Return to her eternal rest inside a painting. (all succeeded)

Madame Clairvoya is a portrait ghost and one of Luigi's allies in Luigi's Mansion. Clairvoya is fortune-teller ghost that is encountered by Luigi in the Fortune-Teller room.

Unlike the rest of the portrait ghosts, she is friendly to Luigi, and even offers to help him with her fortune-telling powers. To do this, Luigi needs to give her personal items from Mario, and she can immediately get in touch with the spirit world and reveal information about Mario's disappearance. However, each of the five items provide limited information, so Luigi always has to go looking for new things from Mario.

Madame Clairvoya resides in the Fortune-Teller's room, located in Area Two, although the room isn't cleared until Area Three. Her room contains some drawers, four candelabras, a gold chair that she is seen sitting on and a crystal ball located over a table. Luigi points his flashlight at the crystal ball and it increasingly shines until Madame Clairvoya materializes in the room.

When Luigi talks to Clairvoya, she presents herself as the "seer of dropped items". She suggests Luigi to bring her any item he can find so she can use her ability to reveal important events that led to Mario's whereabouts. Throughout the game, Luigi finds a total of five items dropped by Mario in the mansion; Mario's Hat, Mario's Glove, Mario's Shoe, Mario's Letter and Mario's Star. When she is given Mario's Glove, she is surprised that Luigi actually referred to the Mario everyone knows and through her crystal bar, she contacts the spirits. Clairvoya reveals that Mario is indeed alive, but feels unsure about it.

Later, Luigi gives her Mario's Shoe. Clairvoya analyzes it, revealing that Mario is alive, but imprisoned in a painting located in an altar. After Luigi gives her Mario's Letter, Clairvoya reads it, claiming herself as a "licensed letter-reader", revealing Mario wrote "Look out for Boos, Luigi!". She also reveals that she can hear Mario's voice trying to warn Luigi about King Boo, the one who captured Mario in the first place.

When she is given Mario's Star, Clairvoya reveals about "the power of the Boos" and how they can become stronger when they gather in numbers, but the Poltergust 3000 is enough to trap them. Clairvoya also mentions she only has the strength to see one last dropped item. Luigi later finds and gives her Mario's last item, his hat. Clairvoya analyzes it, revealing that Bowser is somewhere in the mansion despite Mario having defeated him in the past, and now King Boo is trying to revive him.

Clairvoya becomes afraid of Bowser and quickly loses her powers, given her previous words. Despite this, she mentions she can go to her painting satisfied knowing she has given words to what the spirits have shown and asks joyfully to Luigi to finally vacuum her with the Poltergust 3000 so she can finally rest in peace, not without thanking him for everything. Clairvoya struggles lightly with the capture and only drops a poisoned mushroom like the others ghosts. Even when Luigi fails to capture her, she returns to her seat with her heart exposed for Luigi to vacuum it.

Although not appearing physically, Madame Clairvoya's silver frame can be seen in the Luigi's Mansion battle course of Mario Kart: Double Dash!!.

Unlike other portrait ghosts, Madame Clairvoya is defined as the only one to be an ally to Luigi, given how she doesn't see him as an enemy, but someone who is looking desperately for his brother. She is always seen having problems misspelling some words that she then corrects, as well as putting effort and concentration while examining the item she receives. She also has shown to have some sense of humor, such as making inoffensive jokes with Luigi to comfort him in his search to rescue Mario. Once her powers faded away, she decides that the best she can do now is to allow herself to be vacuumed to make sure Luigi can send her and the rest of the portrait ghosts to their rightful places, despite doing so meant that she would remain trapped in a painting again, proving herself to care more about Luigi rather than just staying in the living world doing the common things she did in life like the others. 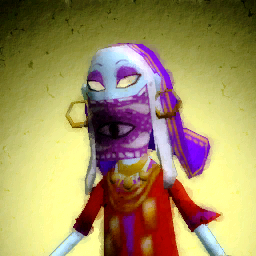 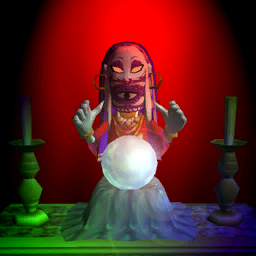 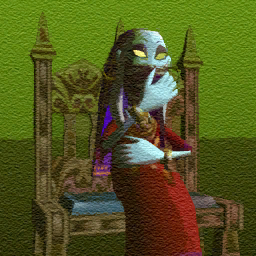 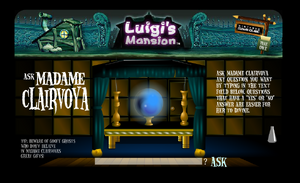 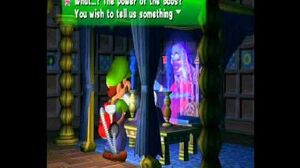 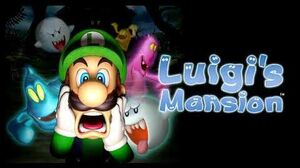