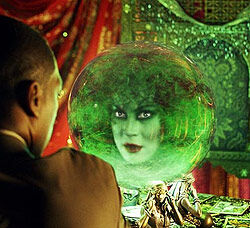 Madame Leota is a heroic witch and the only ghostly character from the Haunted Mansion series. She is the spirit of a psychic medium currently living in the Haunted Mansion. After her death, she seems to be a disembodied head in a misty crystal ball, generally surrounded by a mystery, who sends synthetic vibrations to summon ghosts coming out from the world of spirits. Then the guests meet and join them in their power called the "swinging wake".

She is played by Jennifer Tilly in the 2003 film adaptation who also protrayed Tiffany Valentine in the Child's Play franchise and Celia Mae in Monsters Inc.

Madame Leota is generally mysterious. Her motives became vague, though many interpretations tend to be either lean towards herself in being a good woman or even neutral force. As her incarnations appear to be based around it, she generally likes speaking in rhyme.

In most versions of the Haunted Mansion franchise, Madame Leota is possibly found in the spiritual world known as the Séance Circle, either floating around the room or resting on the central part of a table. She is able to chant a plaintive a plaintive incantation, which significantly conjures the other spirits of the spooky mansion into visual form so that the guests can see the specters who are primarily invisible and haunts. While doing this, the musical instruments might be spooky by levitating in the shadows due to her supplications.

Retrieved from "https://hero.fandom.com/wiki/Madame_Leota?oldid=2164261"
Community content is available under CC-BY-SA unless otherwise noted.