Save the titans from Ghidorah and Alan Jonah's wrath.

She is the daughter of Mark Russell and Emma Williams, and the younger sister of Andrew Russell.

She is portrayed by Millie Bobby Brown, who also played Eleven in Stranger Things, young Alice in Once Upon a Time in Wonderland and Enola Holmes in the 2020 film of the same name.

Madison was born in 2007, to Mark Russell and Emma Williams, she had an older brother named Andrew, bigger than her of five years.

In 2014, at the age of only 7 years old, Madison lost her older brother Andrew (who was only 12 years old) during Godzilla's battle against the MUTOs in San Francisco. Some time after Andrew's funeral, her parents, Mark and Emma, ​​decided to divorce, mainly because Emma began working seriously for the MONARCH expedition, and Madison began to live with her mother, while still remaining in contact with her father.

Madison is listening to music and watching videos online on her laptop. She receives an email from her father, Mark, who is away in the Colorado wilderness studying wolves. She types a quick reply about missing him and wanting to talk to him about how she's getting worried about her mother. Before she can send it, Madison hears the smoke alarm go off as she was making breakfast for her mother and herself, and burns the bacon. Madison lies to her mom about looking for recipes but her mother isn't convinced so Madison admits to answering her father's emails. She asks if her dad will be okay and Emma says Mark is safe where he is, and reveals she finished rebuilding the ORCA. Then Madison and Emma witness the hatching of Mothra, a prehistoric moth-like Titan. The larva quickly becomes agitated after Monarch personnel begin firing electrical pulses at it to pacify it. Emma rushes into the containment chamber with the ORCA. Madison swipes Dr. Mancini's ID badge and runs into the chamber to protect her mother but is helpless as the massive larva prepares to strike down on them. Emma manages to find the right frequency and calms the larva, who leans downwards and allows Madison to touch her. Soon after, eco-terrorists and their leader, Alan Jonah, raid the facility, executing all Monarch personnel except for Madison and Emma. The mercenaries fail to capture Mothra, who retreats behind a nearby waterfall and seals herself in a cocoon.

With a Monarch Osprey, the eco-terrorists take Madison and Emma to the Monarch outpost in Antarctica, killing all personnel stationed there as they did in China, with Madison visibly shaken. The terrorists then escort Madison and Emma down into the depths of the containment facility, where they intend to awaken a three-headed, dragon-like Titan dubbed Monster Zero. Madison marvels at the sight of Monster Zero, who is frozen under hundreds of feet of ice. She runs her hand across the ice as Monster Zero's massive silhouette towers over her, frozen in the same position as he was in many millennia ago. Jonah has his men drill large holes in the ice and place charges in them order to aid Monster Zero in waking up, but Monarch reinforcements soon arrive, along with Mark Russell. During an intense standoff between Jonah and G-Team, Mark tells Madison and Emma to come towards him. Madison begins to walk toward him slowly, but before she could come to Mark, Emma stops her and calls her back. Although hesitant at first to leave with her father, Madison eventually listens and comes back to Emma before escaping with her and the terrorists after her mother detonates the charges. Reboarding their Osprey, Madison tells her mother they can't leave Mark behind before watching Emma use the ORCA to awaken Monster Zero, who rises from the shattered ice and begins terrorizing her father and the trapped Monarch personnel below. Fearing for her father's life, Madison grabs the ORCA from Emma and sends out sonar pulses to distract Monster Zero, but she is pulled away from it by Emma and Jonah's forces, who restrain Madison so Emma can turn off the ORCA to prevent Monster Zero from killing them. Then Madison watches tearfully as Monster Zero closes in on her father, trapped in a damaged Osprey below, before flying off.

Jonah takes Madison and Emma to a Monarch bunker just outside of Boston, which the eco-terrorists have taken over to use as a hideout. From there, Emma contacts Mark and Monarch via video feed from the control room. Relieved that her father is alive, Madison apologizes to him for what happened before. Then she listens to Emma as she reveals that she and Jonah are working together to "save the world" by freeing the Titans before her parents argue about Emma's reasoning stemming from Andrew's death. Then Jonah orders Emma to wake up another Titan, a massive pteranodon-like creature dubbed Rodan, located in Isla de Mara, Mexico. After hearing what her father said, Madison begs Emma to reconsider and allow the village near Rodan's volcano outpost to be evacuated. Then Jonah interjects and mockingly confronts Madison if Emma sold her on the idea to release the Titans with the promise of humans and monsters living together in peace. Madison still begs her mother to let the islanders find shelter first but the despondent Emma proceeds to use the ORCA to wake Rodan anyway. By simply flying overhead, Rodan creates a massive cyclonic drift stream and wipes out the village and many of its inhabitants, before proceeding to decimate a squadron of jets sent by Monarch.

Soon after, the military fires a prototype missile called an "Oxygen Destroyer" at Monster Zero and Godzilla as they fight in the ocean in Mexico. Godzilla is seemingly killed while Monster Zero survives. He regrows the head Godzilla previously tore off during the fight, perches atop Rodan's volcano, and gives out a roar that awakens the remaining Titans around the world. Horrified by the needless death and destruction, and disenchanted with her mother's beliefs, a tearful Madison coldly calls her a monster. Later, Madison storms down a corridor followed by her mother. She confronts Emma about their plan to gradually release the Titans and restore balance to the world, as her mother told her they were doing it in Andrew's memory. Madison asks Emma if Andrew would approve of what they've done before locking herself in an old radio room.

The Titans continue to ravage the planet under the leadership of Monster Zero, now known as Ghidorah, who had usurped the position of Alpha Titan from Godzilla. Overhearing Emma and Jonah discuss the possibility of using the ORCA to broadcast a signal from the Fenway Park stadium, Madison decides to carry out her mother's plan herself and steals the ORCA while it was unguarded and heads into the city. She reaches the stadium just as the last evacuations are completed, and heads into the broadcast booth. From there, she uses the ORCA to blast sonar pulses through Fenway's speakers, effectively distracting the Titans all over the globe, including Ghidorah. Within minutes, Ghidorah arrives at Fenway, slamming down into the stadium and searching for the source of the sonar pulses. He destroys the speakers but continues to hear the ORCA. Madison tries to disable the ORCA, but Ghidorah spots her and attempts to kill her with his gravity beams. Madison escapes the stadium but comes face-to-face with Ghidorah on the field. She throws the ORCA at him, which he tramples on and damages. With nowhere left to run or hide, Madison accepts her fate as Ghidorah charges up his gravity beams ready to kill her. Suddenly, the three-headed beast is thrown back by a blast of energy. Godzilla arrives from the ocean with an entourage of jets and naval vessels, ready to face Ghidorah again. The two Titans proceed to viciously battle each other while Madison escapes. Meanwhile, Mothra and Rodan also arrive and begin battling each other. Madison runs to her family's old house on Beacon Street and barricades herself in as the very Earth shakes due to the battle between the colossal beasts.

Emma and Mark eventually track down Madison and find her in the bathtub of their old house, buried under some rubble. Upon reviving Madison, the family shares an emotional reunion and watch as Ghidorah lifts Godzilla thousands of feet into the air and drops him. Mothra, who just barely defeated Rodan, attempts to defend Godzilla but is obliterated by Ghidorah. Madison's parents repair the ORCA as Ghidorah begins to drain the remaining energy out of Godzilla and an Osprey arrives with Monarch. Once it was activated, Ghidorah released Godzilla and began making his way in the humans' direction. As Ghidorah drew near the Osprey, Emma suddenly paused and realized that she won't be able to escape with Monarch if the ORCA was onboard. Madison, shocked that her mother isn't leaving with her and Monarch on the Osprey, tried to come back to her, only to be held back by Mark before she could do so, crying out after Emma while the Osprey took off. Emma took the ORCA and enters a vehicle she commandeered from Jonah's forces, causing Ghidorah to pursue her as the Osprey escaped. Onboard, a tearful Madison could only watch in horror and distraught as Ghidorah closes in on her mother and blasts her vehicle with his gravity beams, injuring Emma and destroying the ORCA in the process. Before Ghidorah can finish off a mortally wounded Emma as she succumbs to her injuries, Godzilla enters the scene, glowing orange and melting everything around him. Ghidorah, along with Emma's body, is incinerated by Godzilla, who secures his position as Alpha once again, and Madison watches with little happiness as she flies off with Mark and Monarch in the Osprey.

Like Madison's parents, Mark Russell and Emma Williams, she is academically gifted in science. However, she takes after her mother, Emma and rather have hands-on experience out in the field instead of learning in a classroom. She has gained vast knowledge of the titans from accompanying her parents on assignments when permitted.

Madison possesses a natural scientific curiosity and due to her babysitter denying her access to containment units at outposts, Madison got several security violations and residential infractions whenever she tried to satisfy her curiosity.

At the end of the day, all Madison truly wants is a normal life and spend her days playing video games, watching YouTube videos, and making and listening to music playlists.

Madison being stalked by King Ghidorah. 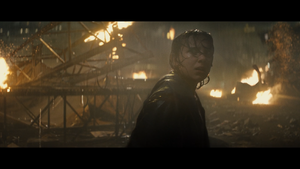 Madison turns around to see that Godzilla has arrived as he has saved her from being killed by Ghidorah. 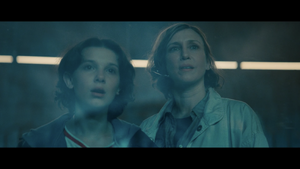 Madison with her mother Emma. 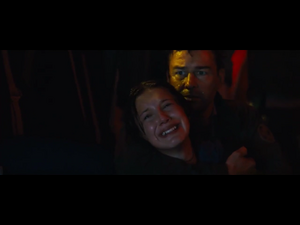 Madison tearfully watching Emma sacrifice herself to Ghidorah while being held back and comforted by Mark.

Madison screams as Ghidorah prepares to destroy her with his gravity beams before he is suddenly knocked over by a blast of Godzilla's atomic breath.

Madison almost touches Mothra in her larva form while smiling.

Madison seeing a storm coming as it was revealed that the ORCA had drawn King Ghidorah's attention.

Madison and Emma getting close to Mothra.

Madison reunited with her family before fixing the damaged ORCA. 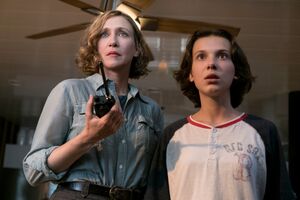 Madison and Emma hear Mothra's sound from the distance. 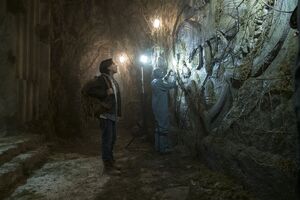 Madison looking at the temple of the Moth. 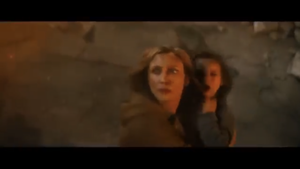 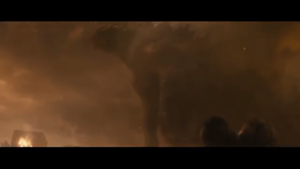 Young Madison and Emma watching Godzilla return to the ocean after his fight with the MUTOs. 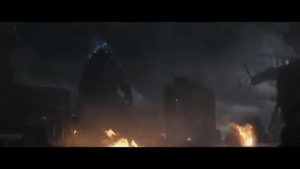 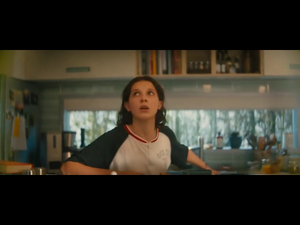 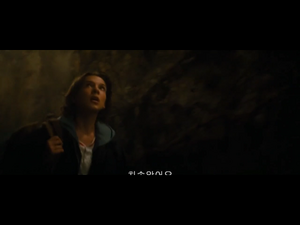 Madison looking around the temple of Moth. 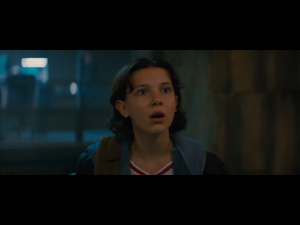 Madison looking at the symbol of Moth. 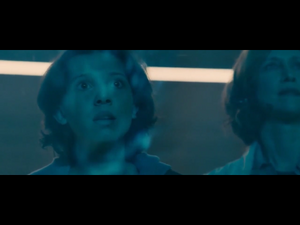 Madison witnessing the birth of Mothra. 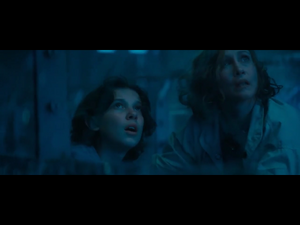 Madison is relieved as Mothra backs down by her mother's invention, the ORCA. 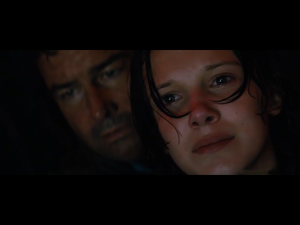 Madison and Mark notice the titans and Rodan approaching Godzilla. 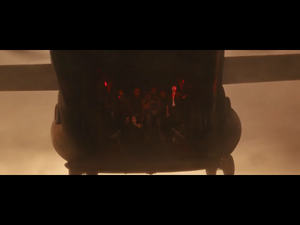 Madison, Mark and Monarch watch as the titans submit to Godzilla as the rightful king of the titans.
Add a photo to this gallery

Retrieved from "https://hero.fandom.com/wiki/Madison_Russell?oldid=2231917"
Community content is available under CC-BY-SA unless otherwise noted.