Hilda
Lady Lover
The Greatest Swordsman That Ever Lived

Going on adventures with Willow.

Help Willow to stop Queen Bavmorda by any means possible.

Unwanted Knight
Madmartigan is the deuteragonist of the 1988 fantasy film Willow. He was a male Daikini from Galladoorn.

He was portrayed by Val Kilmer, who also played Chris Knight in Real Genius, Moses in The Prince of Egypt, and Batman in Batman Forever.

A disgraced knight, Madmartigan crossed paths with Willow Ufgood, a Nelwyn who was tasked with bringing the infant Elora Danan to safety so she could fulfill a prophecy and bring end to the evil rule of Demon Queen Bavmorda. Although they had a rocky start, Madmartigan and Ufgood became friends. During their adventurous journey, the former knight met the love of his life, Princess Sorsha, who abandoned her mother Bavmorda to side with those who rebelled against her. 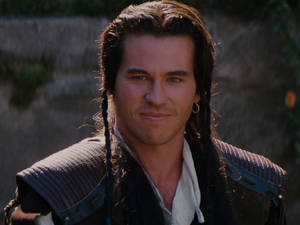