Spending time with his family and mentioning about them.

Maes Hughes was an Amestrian State Military officer stationed in the Investigations Office in Central City and Colonel Roy Mustang's best friend, as well as the closest supporter of Mustang's secret bid for the position of Führer. A devoted family man and exemplary soldier, Hughes was generally well-liked by the other characters (unless he was pushing his love of his wife or daughter on them) and his murder served as the major starting point for the story to unfold.

Tall and lean, Maes Hughes offsets his sharp military uniform with a thin chinstrap of scruffy beard and his jovially spiky hair ending in a characteristic forelock as well as the rectangular spectacles framed in front of his hazel eyes. Though his hair is black, the 2003 anime gave a green hue to it (coincidentally the same shade as Envy), suggesting that it could have been dark green.

For the most part, Maes was an a amicable and cheerful man, even to the point of being considered annoying by his closest acquaintances. He nearly always appears randomly, jovially butting in while something important is being discussed, and is rather well known in Central for shirking his many duties just to have a chat with friends, even while griping gleefully about how much his paperwork is piling up. Hughes is also a rather forcefully hospitable person, never taking "no" for an answer when offering a position under his authority or a night's stay in his house and even going so far as to physically drag people behind him without waiting for their consent - prompting the Elric brothers to call him a "kidnapper" on more than one occasion.

Of course, his biggest and most noticeable character trait is the idolatrous infatuation he has with his wife, Gracia, and his 3-year-old daughter Elicia. Never without one or more pictures of them on hand, Maes makes quite a nuisance of himself by bragging about them to peers and friends and offering up glances of their photographs as either a motivational tool or as reward for a service well rendered. As such, he is constantly advising his friends Roy Mustang and Edward Elric to hurry into marriage themselves, much to Roy's annoyance and Edward's embarrassment.

Behind this behavior, however, is a markedly trustworthy, serious, and particularly intelligent military officer who always goes the distance to look after the people close to him. As a soldier involved with investigations and court-martials as well as a veteran of the Ishval Civil War, part of Hughes' buoyant demeanor may actually be a shield to protect himself and his loved ones from the darker aspect of his profession. He is a realist, decisive and shrewd, who is able to cut out what is unnecessary and focus on the most important aspects of a given situation. With his great eye for detail, Hughes is often the first to notice unfavorable patterns in a given situation and can plan accordingly, often calling for a strategic retreat or a change in tactics moments before anyone else realizes it is necessary. He is calm and analytical, not even flinching when a situation calls for him to deal with dead bodies or even deal out death himself, and he acts sharply even in high-pressure conditions. As a realist, he also understands and accepts that some situations cannot be rectified cleanly or honestly. Even so, he retains a soft spot for idealists like Roy and is prepared to burden as much of the darkness as it takes to ensure that idealists can shape the world into a better place.

Maes, despite all his goofball antics, is a rather wise man for his age and is prone to doling out sagely advice to the people he has invited into his extended family, including Roy, the Elrics, and even Winry Rockbell, in order to make sure they take the correct path to the happy future.

Hughes was initially assigned to the Investigations Division in Central. He is more involved with police work than he is in actual battles. He has displayed his skills with his push knives, with very precise aiming and through the use of his reflexes. Hughes was well known for his strength, as it took a duo of Homunculus to take him down, he was able to fight off one homunculus, and scare a second one. After receiving his promotion to Lieutenant Colonel, Hughes is placed in charge of the Investigations Division. He also possessed very good deductive skills, noticing the pattern of the locations of major fights to match the points used to make the Transmutation Circle given to him by Edward. He was very durable, as even after fighting off one Homunculus, and being shot in the heart by a second, he was still able to give an apology before dying. 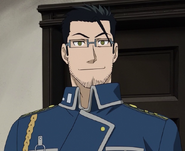