Home of the Range

Get revenge on Alameda Slim.

Maggie is the main protagonist of Disney's 45th full-length animated feature film Home on the Range.

She was voiced by Roseanne Barr.

Maggie was once a prize show cow belonging to Mr. Dixon, and it is shown that she had won several prizes. However, Mr. Dixon was forced to sell her after Alameda Slim stole all of Dixon's cattle except for Maggie. Maggie's new home ends up being a small farm called Little Patch of Heaven, run by Pearl.

Maggie is shown to have a tough and headstrong personality. For much of the film, she clashes with Mrs. Calloway.

Maggie is introduced as a show cow who has been sold by her owner and has come to live on a small farm owned by the kind, elderly Pearl. Maggie is able to endear herself to most of the local farm animals through slight-of-hand tricks. Soon after she arrives, she learns that the bank has threatened to auction off the farm if Pearl cannot come up with $750 within three days. Maggie convinces her fellow cows, Mrs. Calloway and Grace, to enter themselves with her in a show at the town fair in an attempt to win prize money.

In town, they accidentally go to a saloon when they get scared by sounds, mistaking them for a gunfight, and make a huge mess there. After being kicked out, they meet Buck, Sheriff Sam Brown's horse, and Maggie learns that a reward is being offered for the capture of Alameda Slim, which would provide enough money to save the farm. Maggie tries to convince the other cows to help her, but Mrs. Calloway disagrees. Maggie, not on purpose, starts a fight with Mrs. Calloway by knocking her hat off, and ends up getting all three of them tied to a wagon that went to a ranch. On the way there, the cows pass by Maggie's old home, which has been auctioned off to a Mr. Yancy O'Del. She reveals that Alameda Slim, a notorious cattle wrestler, stole all of the cattle. She was only spared because she had been locked in the barn after winning a show.

The three cows hide at the ranch filled with steers in an attempt to catch Slim. However, they soon discover how Slim is able to steal the cows: his yodeling puts the cows into a trance and follow him. Both Maggie and Mrs. Calloway are entranced, but Grace is unaffected, due to being tone deaf, and manages to awaken the other two. When Buck decides to capture Slim himself, the cows follow his trail in an attempt to pass him, but lose the trail in a downpour. This leads to a fallout between Maggie and Mrs. Calloway, who accuses Maggie of dragging her and Grace along for a personal vendetta.

The next morning, Maggie and the cows meet Lucky Jack, a jackrabbit who lost a foot to a lucky charm. After learning that Lucky Jack lost his former home, an old mine, to Alameda Slim, the cows ask the rabbit to take them to it. The cows form a plan to capture Slim. At Grace's suggestion, Maggie and Mrs. Calloway don earplugs so that Slim's yodeling does not affect them. The cows are able to capture Slim, and flee on a steam train, with Slim's accomplices and buyer in close pursuit. However, Slim is freed by Rico, a fake bounty hunter who secretly works for Slim. Alameda Slim dons his alter ego, Mr. Yancy O'del, and plans on attending the auction of Patch of Heaven. However, Maggie and the others use the train to follow him and are able to expose Slim's identity to the Sheriff and Pearl, who are both shocked that the auctioneer who is buying the farm is Alameda Slim, resulting in his arrest and the farm being saved by the prize money.

Maggie decides to stay in Little Patch of Heaven when she hears Mrs. Calloway and Grace, who thought that Maggie had left, say nice things about her. Mrs. Calloway then gives Maggie her hat and allows her to wear it, and Maggie lives a happy life in her new home with the all other farm animals. She is last seen dancing with the farm animals in celebration of Pearl's farm being salvaged and re-opened. 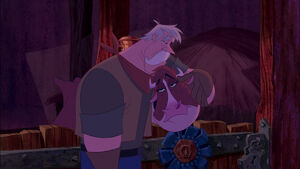 Maggie and her former owner Abner Dixon after Slim steals all the other cows. 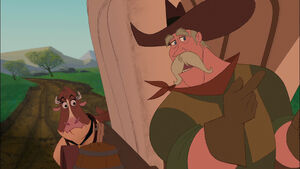 Abner points out Patch of Heaven to Maggie 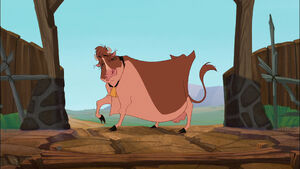 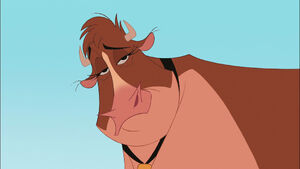 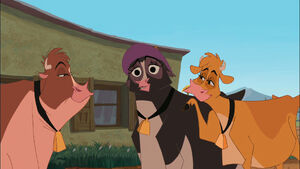 Mrs. Calloway introduces herself and Grace to Maggie. 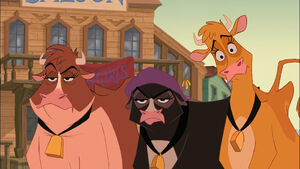 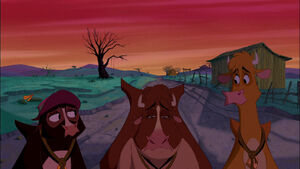 Maggie reveals to Calloway and Grace that she lost her previous farm to Alameda Slim. 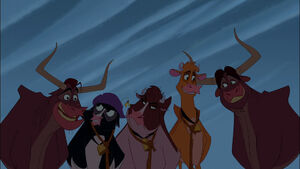 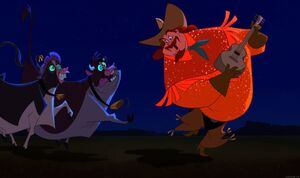 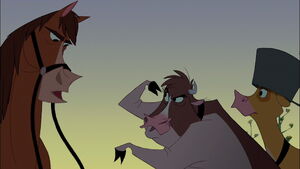 "Look out, Buck! He's makin' a move on your left flank! KABOOSH!" 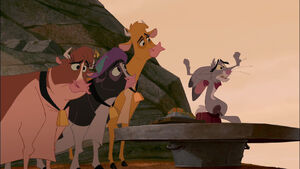 The cows meet Lucky Jack a jackrabbit who lost his home to Alameda Slim. 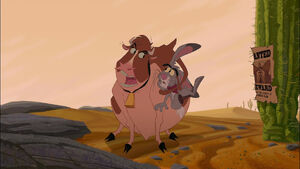 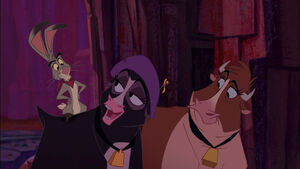 Jack and the cows reach Echo Mine. 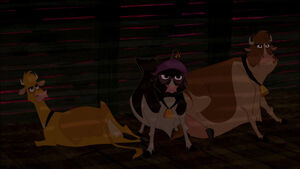 Maggie, Calloway and Grace forced into a train by Slim's goons. 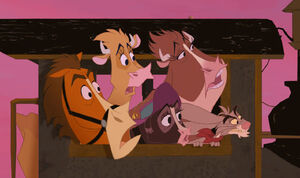 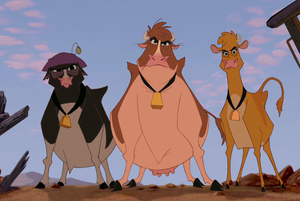 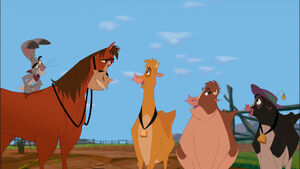 Buck and Jack arrive after Slim is defeated 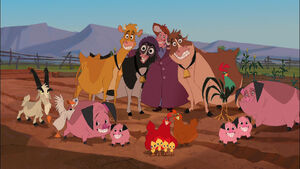 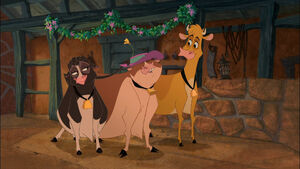 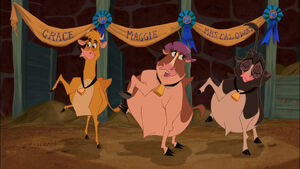 All three bovines dancing
Add a photo to this gallery