To protect her family and friends and survive the zombie apocalypse

Walkers, Shane Walsh, Merle Dixon, The Governor, Woodbury, The Governor's militia, Terminus, The Hunters, The Wolves, Negan and The Saviors, Alpha and The Whisperers

Maggie Greene is a main character and a survivor of the outbreak in AMC'S The Walking Dead. She served as a supporting protagonist during Season 2 and one of the main protagonists from Season 3 onward. She is the eldest daughter of Hershel and Josephine Greene, step-daughter to Annette Greene, and half-sister of Beth and step-sister to Shawn. A tomboy and a farmer's daughter with a steely personality, Maggie wears jeans, boots, tank tops, and rides a horse. She is married to Glenn, but after his tragic and brutal death at the hands of Negan in the Season 7 premiere, Maggie is now a widow. However, she does get pregnant with Glenn's baby before his death, and she decides to officially change her last name to "Rhee" in honour of her husband. 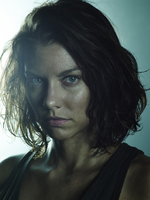 Maggie in season nine.
Add a photo to this gallery

Maggie Rhee at the Walking Dead wiki |-|Comic Series= Maggie Greene is a main character first encountered in Issue 10 of Image Comics' The Walking Dead and is the last surviving member of the Greene Family. She is the girlfriend-turned-wife of the late Glenn, biological father of their unborn child, and soon after Carol's death, adoptive mother of Sophia. She moved out of Alexandria with her adoptive daughter shortly after Glenn's death to Hilltop, but in the conflict with The Saviors, she convinced the population to fight, successfully overthrowing Gregory and becoming the de facto leader of Hilltop.

Maggie was never a religious individual, often annoyed by her father's extreme religious attitude which he was awakened to after her mother's death.

She's shown herself to be both physically and emotionally weak, relying on Glenn for protection and comfort. She often struggles with her own insecurities as well, worrying about what people (including Glenn) think of her, even within the most least affecting situations, and trying to hide her emotions so as not to have her weaknesses be fully exposed. These insecurities and Maggie's constant mood swings bring a strain to her and Glenn's relationship and leads him to become confused about where they stand. In time, Maggie has been shown to overcome her fears and concerns as Hilltop leader.

Maggie grows severely independent and hardened over time, mostly after Glenn's death. She is shown to stand up for what she believes in and has become an important voice in the survivors. She convinces the population of Hilltop to fight against The Saviors, showing great leadership and strength. She soon becomes their leader. Two years after the events of "All Out War", Maggie continues to have a tight grasp on things at the Hilltop. The residents respect Maggie as a leader and have faith in her that she will make the right decisions.

Comparison to the TV Series

Retrieved from "https://hero.fandom.com/wiki/Maggie_Greene?oldid=1941295"
Community content is available under CC-BY-SA unless otherwise noted.