Protector of Innocence
Margaret "Maggie" Madsen is a supporting character and major protagonist in the Transformers movie franchise, she is a former analyst for the NSA and now works for the Rand Corporation with Glen Whitmann.

She was portrayed by Rachael Taylor in the first installment of the Transformers movieverse who also portrayed Trish Walker in the Netflix TV series, Jessica Jones and the Defenders.

Maggie and her fellow analysts were present at an emergency briefing held at the Pentagon when Secretary of Defence Keller revealed that SOCCENT Forward Operations Base in Qatar had been attacked by a mysterious and unidentified force, leaving no survivors. Pressing the point home to the young computer experts, Keller said that their enemy had attempted to hack into the base's mainframe but failed, leading the government to the conclusion that they would try again. Catching Maggie's attention was the only clue left at the base, a mysterious frequency encountered during the hack, one unlike any seen before.

While analyzing the frequency for its origin, Maggie and her team discovered a hostile agent hacking into the mainframe of Air Force One, accessing almost the entire US Military defense grid. With no way to stop the enemy, Maggie suggested disconnecting all their servers, which proved to be successful. Later, Maggie snuck into a confidential briefing between Keller and the Joint Chiefs of Staff. When one high-ranking officer commented that the attack might have come from North Korea or Russia, she interrupted, explaining that the capabilities of this enemy were far in advance of anything they'd ever seen. She theorized the possibility of a living organism being the culprit, but Keller was unwilling to listen unless she provided evidence to back up her claims.

Frustrated at being stonewalled by the government and the military, Maggie copied the contents of the frequency data onto an SD memory card and left the Pentagon. Arriving at her friend Glen's house, she explained to him the dire consequences she would face if she was discovered with this information, and that he was the only hacker with the skills to access the secrets embedded within. His curiosity piqued, Glen proceeded to hack into the data, discovering images and files about something called Project: Iceman and an organization named Sector Seven. Within the signal itself, she and Glen discovered strange symbols. Before they could view any more information, an FBI assault team crashed through the front door and arrested everybody in his house.

Detained in a holding room at the Pentagon, Maggie observed Glen eat an entire plate of donuts while he pontificated his theory that the food was a test in character and guilt: If one did not eat the donuts, one was guilty, and he, for one, had a totally clear conscience. When Federal agents entered the room, Glen immediately cracked and accused Maggie of all the wrongdoing while casting himself in a sympathetic (if somewhat pathetic) light. Maggie told him to shut up as she explained she needed to speak to Keller and that they needed to go about this crisis in a different direction before the United States went to war with the wrong country.

Much later, as Glen was recovering from his donut binge with a bottle of Pepto Bismol, Keller suddenly entered the holding room, telling Maggie to come with him as an advisor. He allowed Maggie to bring Glen along as her advisor. Soon, on a Army Blackhawk helicopter bound for Hoover Dam, she and Glen found themselves with two teenagers, Sam Witwicky and Mikaela Banes. Attempting to break the ice, Sam initiated conversation, prompting Maggie to ask him why the government got them. To Glen's astonishment, he replied that he had bought Bumblebee that turned out to be an alien robot.

Landing, the group joined up with Keller, Captain William Lennox, Sergeant Robert Epps and their men, escorted by Sector Seven director Seymour Simmons and Tom Banachek. The two spooks explained that they were all here because they'd been exposed to the N.B.E.s, a.k.a. the alien robots. Brought to a large, top-secret chamber, the group saw N.B.E.-1, whom Sam identified as Megatron, leader of the Decepticons. When he explained that Megatron was after the All Spark cube to transform all of Earth's technology into an army, Simmons brought the group to a viewing room looking over an even larger chamber encasing the massive AllSpark.

To demonstrate the AllSpark's power, the group was then herded into a containment room where experiments using the radiation of the AllSpark were conducted. Asking for phones and electronic devices, Simmons took Glen's proffered Nokia cell phone, commenting that they were nasty stuff, yet the Japanese know the way of the samurai. Maggie incredulously (but quietly) noted that Nokia is from Finland, to which Keller responded (also quietly) that while that was true, if she hadn't noticed, Simmons was a rather strange man. Exposed to the All Spark's power, Glen's cell phone was transformed into a small, spider-like mechanical beast with a tiny machine gun and rocket launcher, which jumped at Maggie as she looked on in astonishment. Griping that the beast was breaking its containment case, Simmons sent an enormous electrical shock into the creature, killing it. Soon after, Hoover Dam came under attack by the Decepticons, intent on freeing Megatron.

Needing to get word out to the US Air Force while traditional communications were down, Keller, Simmons, Glen and Maggie rushed to an archive storage room where there was an old radio. However, they soon discovered that while the radio worked, it had no microphone. Maggie suggested to Glen that they hotwire a computer into the radio to send out a tone that they could use as Morse code to contact the military. As Glen did so, Frenzy attacked, forcing Maggie to help barricade the door and load shells into antique shotguns for Keller. Simmons passed her a shotgun as he blasted the Decepticon with a flamethrower. The small enemy sneaked in via the air ducts and attacked the group with machine guns as Maggie, Keller and Simmons fought back. Eventually, Glen successfully managed to contact the Air Force just as an errant CD-razor projectile fired by the Decepticon destroyed its own head, (presumably) killing it. 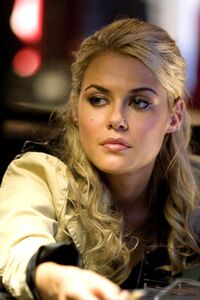