The Magic Carpet, better known as just Carpet, is an anthropomorphic carpet and a supporting character from Disney's 1992 film Aladdin who is a good friend of Genie and the leader and boss of Abu. Aladdin first finds Carpet in the Cave of Wonders while trying to find Genie's lamp. He is also shown to be mode of transportation.

Despite being a carpet, Aladdin's Magic Carpet is a character of many traits.

In the first film, Carpet was a bit shy when he first encountered Aladdin and Abu, but was curious enough to nervously fly over to investigate; eventually hiding once Aladdin first saw him or whenever Abu looked over. Aladdin had to coax him out of hiding, and soon, Carpet quickly befriended Aladdin and risks his own life to save him. He happily joins Aladdin on his magical adventure to win the heart of Princess Jasmine. One thing he does not enjoy is how Aladdin would not tell the truth about him truly being a street urchin, which was the only time Carpet showed any annoyance towards Aladdin.

Over the course of the series, he has shown to possess an almost-human level of intelligence, such as being shy, heroic, romantic, and unquestionably loyal.

He also seems to be very intelligent, as well as perceptive, more so than most other characters. He is usually the one that figures out what's going on before anyone else, though he has trouble expressing it to Aladdin and his friends due to his lack of ability to speak or make any sounds. On top of his intelligence, he is very compassionate, but occasionally lets his kindness speak over his common sense. Also, unlike Genie, he doesn't take losing seriously.

In the end, Carpet has been shown to have a strong bond with Aladdin, not only saving Aladdin's life on multiple occasions, but also doing favors for him such as helping Aladdin and Jasmine fall in love, despite his distate for Aladdin's lies. In return, Aladdin has said to trust Carpet with his life (as stated in King of Thieves).

Carpet is found by Aladdin and Abu in the Cave of Wonders while trying to find Genie's lamp. Abu first disagrees with Aladdin in letting him join their family but soon becomes best friends with him. He directs them to a lamp and tries to help them escape when the cave starts to tremble. He gets pinned down by a falling boulder, but is able to free itself to catch Aladdin and Abu as they fall back into the cave. The trio become trapped in there until they rub the lamp to unleash a Genie, who helps them get out of the cave.

Throughout the rest of the film, Carpet tries to help Aladdin win the heart of Princess Jasmine and save Agrabah from the evil Jafar. Aladdin (in his royal ego Prince Ali) and Jasmine ride on him to go on a ride around the world. When Aladdin and Abu become imprisoned in a tower by Jafar, he flies into the tower and helps them return to Agrabah to face Jafar and rescue Jasmine. In the film's final battle, he is unraveled by Jafar, but is restored once Jafar is trapped in his own lamp after becoming a genie.

The Return of Jafar

Carpet is still with Aladdin and friends and still acts as a mode of transportation. He is first seen flying Aladdin and Abu out of a lair of thieves. Later he helps Aladdin and Jasmine reunite after briefly breaking up after the presence of Iago. He then takes Aladdin and the Sultan to a quit spot to patch things up as well but are ambushed by villains led by Abis Mal and Jafar. He is kidnapped and nearly escaped until being magically chained by Jafar. After Genie and Aladdin rescue the group they go off to battle Jafar. In the start of the fight, he is turned to glass and shatters into pieces on the ground. After Jafar is killed, he is restored to normal and welcomes Iago.

Carpet appears as a main character in the animated TV series, featuring prominently in several plots; on one occasion Aladdin's enemy, Abis Mal, stole and forced him to fly him to the location of a valuable treasure by threatening him with moths, while another episode featured him feeling dejected after the group met a race of sprites who allowed them to fly without him (Although he later proved his continued worth by tricking the sprites into settling the palace back in its original location after they got angry at the rest of the group and nearly allowed the palace to crash). He has a somewhat friendly rivalry with Genie as the two often play each other at various games such as chess (with Carpet, much to Genie's frustration, often winning). He proves to be somewhat fearless not caring how cruel or mighty their opponent might be, when Aladdin or one of his friends gets hurt, Carpet rushes into battle.

Carpet reappears in the film's final installment along with everyone else. In the film Aladdin and Jasmine are finally getting married but things become dangerous when the former and the palace family meet the forty thieves led by Aladdin's missing father, Cassim. Carpet joins Aladdin and the friends as they journey to discover the secrets of his past.

Notably, after meeting Cassim and convincing him to return to Agrabah, the latter was openly disapproving of Aladdin owning a magic carpet, and using it as a mode of transportation; believing it to be dangerous compared to the traditional choice of horses. By the end of the film, when Carpet saves the lives of Aladdin and Cassim, the latter shows a change of heart towards his son's companion. 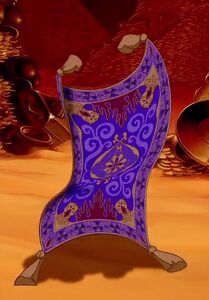 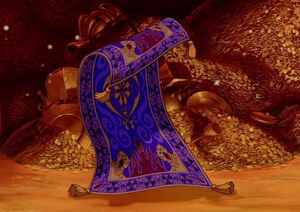 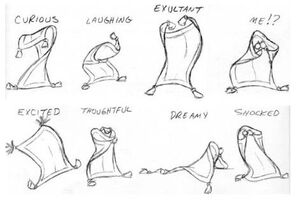 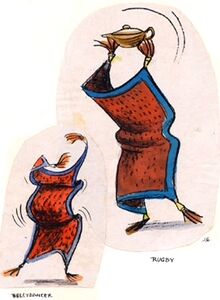 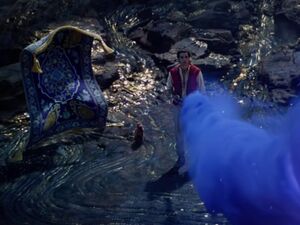 Retrieved from "https://hero.fandom.com/wiki/Magic_Carpet?oldid=2131364"
Community content is available under CC-BY-SA unless otherwise noted.