Magik (Illyana Nikolievna Rasputina - typically anglicized to Rasputin) is a Marvel Comics character, associated with the X-Men. She is the younger sister of the Russian X-Man Colossus. Like all demons from Limbo Illyana's religion is Occult/Demonolatry.

Illyana Rasputin was a mutant known as Magik in the New Mutants and Colossus' younger sister. Magik could create disks of energy that transported her through time and space. Magik was also a sorceress who could manifest her magical powers in her soulsword, a construct of mystical energy that could break spells and harm supernatural beings.

A few years after Piotr left their home in Russia and joined the X-Men, Illyana was kidnapped by Miss Locke, assistant to the assassin Arcade. Rescued by the X-Men, Illyana decided to stay with her brother at Professor X's school for mutants. Later the sorcerer Belasco brought Illyana and the X-Men to his extradimensional realm, Limbo. They escaped but Belasco managed to keep Illyana there as his captive. He turned a portion of her soul evil, which she called her darksoul.

This change gave her powers of sorcery. Belasco hoped eventually to turn Illyana completely evil. Illyana eventually mastered the magic in ancient books and did battle with him using her soulsword, a construct of her magic power. With Belasco defeated, she returned to Earth and joined the New Mutants under the code name, Magik.

Mutantion: Magik's mutantion started when she was a little girl.

Illyana has the personality of a demon. A loyal friend, a good person, a hero determined to do the right thing no matter the cost. She is cold, ruthless, brutal and vengeful to her enemies, and is a constant flirt. She recognizes the use of her magical heritage and uses evil's own weapon against the bad guys. 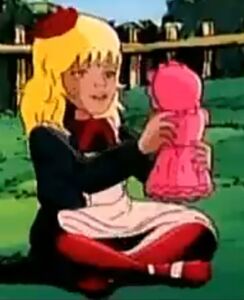 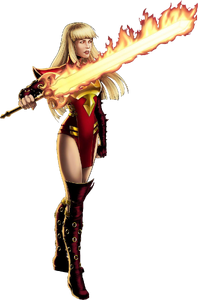 Magik in Marvel Avengers Alliance
Add a photo to this gallery

Retrieved from "https://hero.fandom.com/wiki/Magik?oldid=1678648"
Community content is available under CC-BY-SA unless otherwise noted.