Bringing balance to nature, prove to be better than George

Kind-Hearted Hero, Dimwit (Original Run)
Feral, Beat 'em up Hero (Revival Run)
Ursula (Magnolia on the Original Run) is the character of George of the Jungle. On the original run, she's the kind-hearted character, and her father is a witch doctor, but on the Revival Run, she's a feral, not very well behaved, always pulling antics on George, Magnolia (who was named Ursula on Season 1), and Ape, cause the destruction to the jungle, and she always beats up fellow hero George, but on Lovecano. She also attacked the mad scientist. it's unknown that whether she had a family therefore she's an orphan just like George. Even though she claims to be better than George, there are Romantic Hints between those two. 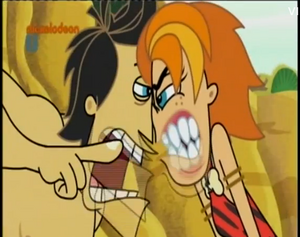 Season 2 as Ursula, having a stare down with fellow hero/rival George. 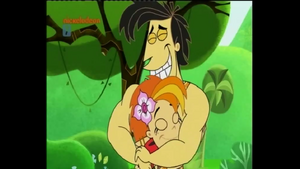 Ursula Hugging George from Season 2
Add a photo to this gallery
Retrieved from "https://hero.fandom.com/wiki/Magnolia/Ursula?oldid=1791739"
Community content is available under CC-BY-SA unless otherwise noted.