To aid the Shadowhunters

Friend of a Magical Hero
Magnus Bane is one of the supporting characters in The Mortal Instruments and The Infernal Devices and the main protagonist of The Bane Chronicles. He is the High Warlock of Brooklyn who is around 800 years old but has the appearance of a 19-year-old and aids the Shadowhunters and is also shown to be bisexual having dated the vampire Camille and a Shadowhunter named Alec Lightwood.

He is played by the late Godfrey Gao in the first book's film adaption The Mortal Instruments: City of Bones.

In the TV adaptation, Shadowhunter, he is played by Harry Shum Jr.

Magnus was born to a half-Dutch/half-Indonesian woman and an unknown demon in 16th century Indonesia and due to being half-demon he like other Warlock's had a mark, his was cat-like eyes.

After discovering this Magnus's mother hung herself and his stepfather tried to drown him but Magnus saved himself by using his magic to burn his stepfather. After this he was brought up by churchmen and raised by the Silent Brothers of Madrid.

Every two years until 2007 Magnus would cast a spell on Clary Fray to remove her memories of seeing anything from the Shadow World on her mother Jocelyn's wishes as she wanted to protect her daughter from it and from Clary's father Valentine. 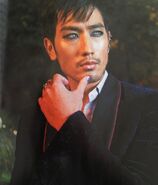 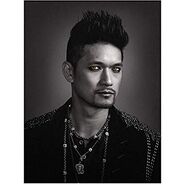 Add a photo to this gallery
Retrieved from "https://hero.fandom.com/wiki/Magnus_Bane?oldid=1664993"
Community content is available under CC-BY-SA unless otherwise noted.