To prevent Ragnarök
To find Sumarbrander and stop Fenris Wolf from being released (in The Sword of Summer, succeeded)
To find Mjølnir (in The Hammer of Thor, succeeded)
To stop Loki and his army from starting Ragnarök (in The Ship of the Dead)

Magnus Chase (born January 13, 1995) is the demigod son of Frey the Norse God of fertility and the late Natalie Chase, the nephew of Fredrick and Randolph Chase, the cousin of Annabeth Chase and Blitz and the protagonist of the Norse mythology series Magnus Chase and The Gods of Asgard. He has a valkyrie named Samirah al-Abbas. He is dating Alex Fierro, the child of Loki.

One Thanksgiving, a six-year-old Magnus and his cousin Annabeth played with dominos in the library of their uncle Randolph's home. Whilst this was going on, Magnus's mother Natalie, Randolph and Annabeth's father Fredrick got into an argument, which caused a rift between the family that involved Natalie not giving something Randolph wanted.

After this, Magnus never saw Annabeth and his two uncles again. Through the years, Magnus and Natalie would go hiking and camping in The Blue Hills (as Natalie didn't like being indoors). When Magnus was fourteen, two large wolves with glowing blue eyes came into his and Natalie's apartment. Natalie told Magnus to escape through the fire exit, saying she would find him. However, Magnus fell off the fire exit and onto the ground below, moments before the apartment exploded. Later, Magnus heard on the news that Natalie had perished in the fire and her body was removed from the remains of the apartment. Afterwards, Magnus began living on the streets of Boston and keeping one step ahead of the police and truant officers, who believe that he was responsible for the fire.

Two years later, Magnus (now sixteen) continues to live in the streets until he learns that his uncles and cousin are looking for him. Upon going to Randolph's mansion, Magnus meets his uncle, who tells him that now he is sixteen, "they" will come for him and that his father is a Norse god. Going to Longfellow Bridge, Magnus summons a sword called Sumarbrander (which was previously owned by his father). A fire giant named Surt arrives wishing to have Sumarbrander as his own. During the fight, Magnus is mortally wounded by Surt, but is taken to Hotel Valhalla by a Valkyrie named Samirah al-Abbas.

Upon arriving at the hotel, Magnus befriends some of the other inhabitants; Mallory Keen, Halfborn Gunderson, and Thomas Jefferson Jr. (T.J.). He learns that he has become an einherji (one of Odin's warriors, who train for Ragnarök, which is Doomsday). He also learns that his father is Frey, the Vanir God of Summer.

With the help of Samirah and his friends a dwarf named Blitz (short for Blitzen), an elf named Hearth (short for Hearthstone) and a fellow demigod einherji named Alex Fierro (who is genderfluid) set out to stop the god of mischief Loki (who happens to be Samirah's father and Alex's mother (after taking on a female form to charm Alex's father) and had also convinced Randolph to work for him in exchange for his late wife and daughters to be restored to life) from triggering Ragnarök and destroying the gods and the Nine Worlds.

In the third and final book The Ship of the Dead, Magnus and his friends travel in a Viking ship given to them by Frey, which is nicknamed "The Big Banana" (due to it being yellow) and travel to stop Loki (who has been released from his bounds by Randolph, who shortly after dies and goes to Helheim) and his forces sailing Naglfar (a ship made from the fingernails and toenails from fallen warriors) to battle the gods and trigger Ragnarök. After finding Kvasir's Mead, Magnus drinks it in order to challenge Loki to a flyting (a duel of insults) in order to recapture him.

Upon arriving in Niflheim (the world of cold), Magnus challenges Loki to the flyting. At first, Loki refuses and says he will just kill Magnus instead, but is made to change his mind by Naglfar's captain Hrym. At first, Loki gains the upper hand and hurls insults at Magnus (e.g. about his family and how Frey wasn't interested in him until now, whereas Loki himself had been known by Samirah and Alex since they were young children). However, Magnus manages to defeat and shrink Loki by talking about the glories of his friends, before Mallory traps Loki in a walnut.

After escaping Hrym and his forces and delaying Ragnarök, Magnus and his friends go to the gods and give them Loki. Before returning to Hotel Valhalla, Magnus asks a favour of Odin. It is revealed that the favour is helping turn Randolph's mansion (which was left to Magnus and Annabeth in Randolph's will) into a shelter for homeless youths. The shelter is ran by Magnus and Alex (who is now in a relationship with Magnus) with help from Blitz and Hearth. 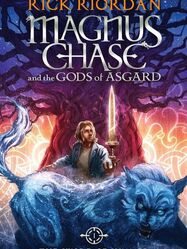 Magnus on the USA cover of The Sword of Summer book. 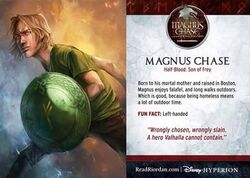 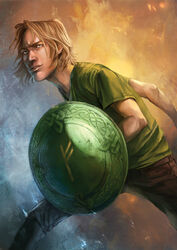 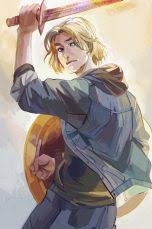 Retrieved from "https://hero.fandom.com/wiki/Magnus_Chase?oldid=1756256"
Community content is available under CC-BY-SA unless otherwise noted.