Mahado, also known as Mahad, in the 4Kids dub of Yu-Gi-Oh, is one of the main protagonists of the final arc of Yu-Gi-Oh. Mahado is one of the six priests that serve the Pharaoh, Atem and is known for his loyalty. He is the childhood friend of Atem and Mana, his future apprentice. Originally, the owner of the millennium ring before losing it to Thief King Bakura, Mahado chose to heroically sacrifice himself in his battle with the thief king by fusing his spirit and monster, "Illusion magician" to form the "Black Magician." Despite his death, Mahado lived on as Black Magician and loyally continued to serve his Pharaoh during and at the end of the final arc. He is the first of the six priests to die. In the ceremonial battle between Yugi and Atem, Mahad appears as the Black Magician and fights alongside his king against Yugi Muto.

Since childhood, Mahado has and is a loyal person to people he cares about such as Atem and Mana, his apprentice. He often acts as a guardian for the two and deeply cares for them as evident when a snake was going to bite Atem, Mahado took the blow instead. Mahado is very selfless as he puts the well-being of others before himself such as when he ensured a child that he will protect the people. Mahado's greatest trait is his loyalty to his Pharaoh and childhood friend, Atem. Even though Mahado died in his battle against the thief king, Mahado's loyalty to the Pharaoh is so great that even in death he was still willing to fight to with him as the "Black Magician" and loyally continued to do so up until the end of the final arc.

Arguably, his strongest friendship was with his Pharoah as they were childhood friends. As children, Mahado was the oldest of the children and had to look after both Atem and Mana. When a young Atem, Mana, and himself was playing in the garden, a snake appeared and was about to bite Atem. Mahado choose to take the hit instead and Atem decided to help him even though Mahado asked why he would do that to which the young prince reminded him that he is his friend. This event would shaped Mahado into the loyal person he is known for in his later years as a priest.Years later after Thief King Bakura's attack on the Royal Palace, Mahado decided to confront the Thief King himself and after an arduous battle Mahad decided to sacrifice himself to defeat the Thief King which ended up with him turning into a tablet and becoming Black Magician. Before his final end came his last words to his king were "Pharaoh, I will always be your loyal servant." Despite his physical death, he lived on as Black Magician and as the Black Magician continued to fight alongside the pharaoh until the end of the final arc. In the Ceremonial Battle, when Atem summoned Black Magician, Mahad told the Pharoah that even though he is a spirit, he will loyally fight with him showcasing the bonds between the two despite time has passed. This vow became the reason why the Black Magician in the current era will always protect Yugi.

Mana is the childhood friend of Mahado and Atem. Years later when Mahado became a priest, Mana became his apprentice in the magical arts. Mahado himself can get tired of Mana whenever she appears such as hugging the Pharaoh surprisingly. Mahado as her teacher would often try to tell her to study her magical arts as well as ask if she did practice any spells. Mana also cares greatly for her master as when he died to sacrifice himself to stop Bakura, she was grief-stricken and morned for her master's passing. This event would shape Mana into becoming a great sorcerer like her Master before her and in the end it proved fortuitous as years later durning Priest and now Pharaoh Seto's reign she became one of the newly formed six priests as well as becoming the new owner of the millennium ring.

Mahado seems to care about his fellow priest's well-being. It seems that Isis seemed to have romantic feelings for Mahado as she was in tears, when he was going to die and later mourned for his death.

There seemed to be little interaction between the two priests. Despite this, there was some instances of interaction but there relationship was not really a good one. This was evident when Mahado told the Pharoah that he and his magicians set up a barrier during the defense against Thief king Bakura, Priest Seto made a mocking statement about how good his magicians are which offended Mahad but Solomon one of the priests cut them off before a confrontation. Even though Mahado died honorably, Seto believed that his death changed nothing and that he was a fool for doing so which showed the negative relationship Seto had with Mahado. 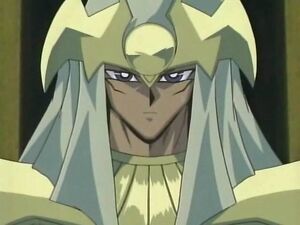 Retrieved from "https://hero.fandom.com/wiki/Mahado?oldid=1517656"
Community content is available under CC-BY-SA unless otherwise noted.