To stop Ryota Mitarai from brainwashing the world with hope (succeeded).
To atone for her actions as Ultimate Despair (ongoing).

Mahiru Koizumi (小泉 真昼 Koizumi Mahiru) is one of the characters featured in Danganronpa 2: Goodbye Despair.

She was apparently murdered by Peko Pekoyama in Chapter 2 after she had an argument with Fuyuhiko Kuzuryu about the Twilight Syndrome Murder Case in the beach house. But in reality, both Mahiru and Peko are still alive.

Mahiru is a young woman in her early twenties, around 22 at youngest. Her virtual avatar in the Neo World Program appeared as her 17 year old self. She has dark red hair in a bobbed cut, green eyes, and a pale face with light freckles across her cheeks.

Mahiru's outfit consists of an olive-green school jumper with a plaid white-and-orange tie, which she knots around the collar of her uniform shirt. She wears dark green knee-high socks, and her shoes are a dark shade of forest green. Directly below the opening of the socks, there is a small orange symbol.

During her time at Hope's Peak Academy, she wore the standard uniform with black knee length socks and the same shoes.

Mahiru is an optimistic and sensible girl who is generally rather calm and unafraid to speak her mind. She initially comes off as confident, but is later revealed to have self-esteem issues. Mahiru compares her photographs to those of her mother, a famous war photographer whose career led her to be absent from home for much of Mahiru's life. Her father was a very poor parent, leaving the responsibility of the housework entirely to her. When Hajime Hinata was being scolded by Mahiru, he likened it to being yelled at by his mom.

Mahiru has high expectations of men and is quick to be abrasive towards them. She is much more tolerant and friendly to girls. The subjects of her photos are usually of girls and explains that she easily gets bored of photographing guys. She loves taking photos of people's smiles, and it's revealed in her FTE that she recorded everything on the island so that they won't forget, except for the guys whom she only recorded once every three days. Despite her love for photography, Mahiru believes her title is stupid compared to her classmates. She has been shown to dislike selfies.

Mahiru wants to help as many people as she can, but it'd be a mistake to call her a pushover. She doesn't hesitate to scold those who are rude to her and is also very good at taking care of people, even if begrudgingly. Mahiru is introduced as hating people who lacks manners, though she later develops a very close, intimate friendship with Hiyoko Saionji.

Because Mahiru is a reliable girl who thinks of her friends and is prone to taking care of people, she has many friends outside of her own class as well. 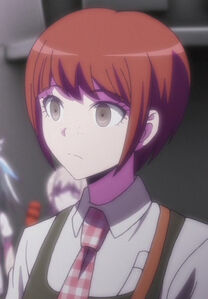 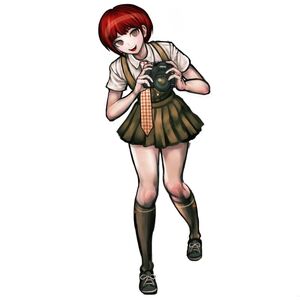 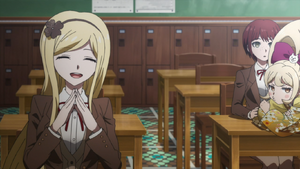 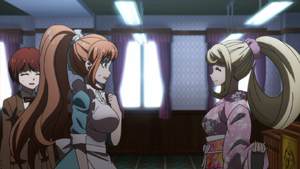