Going out with Zuko

Mai is an antagonist turned into supporting character in Avatar: The Last Airbender. She is a daughter of a rich Fire Nation politician and an old friend of Ty Lee, Azula and Zuko. She joined Azula's squad for the reason she hates boredom. In the end, she betrayed Azula and joined the good side.

She was voiced by Cricket Leigh.

Mai is a child from a noble family of the Fire Nation. In her family, she was given whatever she desired just as long as she didn't act out. For the sake of her father's political career, she was required to be silent, calm, and behave as they expected. While attending Royal Fire Academy for Girls, she became friends with Princess Azula and Ty Lee. Whilst playing at the royal palace, Mai eventually developed a crush for Azula's elder brother, Zuko, that of which Azula didn't hesitate to tease her about.

Several years later, Mai was forced to move to the Earth Kingdom as her father was promoted to be the governor of Omashu, after it had been recently conquered during the Fire Nation's invasion.

In present time, Mai lives in the conquered city of Omashu, with her mother, younger brother Tom-Tom, and her father. Azula comes with Ty Lee, to bring her on a special mission. Mai quickly agrees to this wanting to get out of Omashu.

She is also now dating Prince Zuko. She has also seemed a lot happier now that she's with Zuko. She hasn't shown any fighting in Book 3. Zuko recently left to join Team Avatar, and left a note for Mai.

Zuko and Sokka recently infiltrated the Boiling Rock, the prison, described by Zuko as "inescapable". After Zuko was found out to be an infiltrator, he was visited by the prison warden in his cell, Mai's uncle. Later he is taken by the guards to another room, with Mai waiting in it. She shouts angrily at him for just leaving a letter for her explaining that he'd left. A guard then comes running in saying he had been assigned to protect Mai because a riot has started, but she explains that she doesn't need protection. Zuko uses this to escape by Firebending making the guard jump in front of Mai, and he locks the two in the cell, and we then see Mai's teary eyes look at him.

When the prison guards are about to cut the line to stop Zuko and Sokka and the others from escaping, Mai takes them out, showing tremendous skill and agility, as she manages to take out at least a dozen guards with ease. She is then captured by the guards, and they take her to Azula who was watching (from on top of another gonadal after she battled the escapees with Ty Lee). The guards are told to leave, and as the two friends argue, Mai explains that her love for Zuko is greater than her fear of Azula. The two prepare to battle, but before either can throw one move, Ty Lee jabs Azula in each arm, rendering them useless for the time. But just as Ty Lee suggests they should escape, a squadron of guards arrive and restrain them. Azula tells the guards to put them somewhere where she'll never have to see them again. Somewhere where they can rot.

After this she is sent to prison and after Firelord Ozai is defeated she got out and restored her relationship with Prince Zuko who has now become the new Firelord, although no mention is made of her in the Legend of Korra so it's unknown if their relationship lasted.

Mai was a master markswoman, able to skillfully hit targets from a distance. This skill, also known as "stilettos", involved shuriken knives and hand arrows, a skill that apparently started with her throwing knives at her bedroom wall out of boredom. She had a deadly accuracy with these weapons and used them to pin her opponents down, even if she or the target was moving, which also helped against benders as they primarily needed their hands and arms to be free to bend. Her expert marksmanship gave her enough strength to defeat powerful benders and multiple opponents.

While she usually pinned her opponents down with her stilettos, she had been seen throwing them in a way that would cause severe, and possibly fatal, injuries, such as when she attacked Aang and Katara, and Toph. Mai's excellent reflexes, speed, and agility, enabled her to incapacitate several prison guards without killing or injuring them. She proved to be quite nimble; on several occasions she was able to leap across long distances and over high obstacles with very little effort. She was also shown to be able to slide across surfaces on her side. When attacking the guards on the Boiling Rock, she was able to attack and dodge by throwing a knife and diving onto her side, gliding across the metal surface in one fluid motion. In addition to her shurikens and the arrow-like darts in her sleeve and ankle holsters, Mai was also proficient with a three-pronged, retractable sai dagger which she used for close combat. 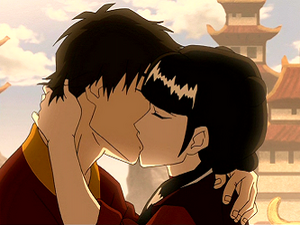 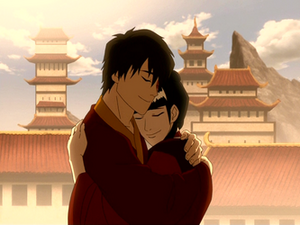 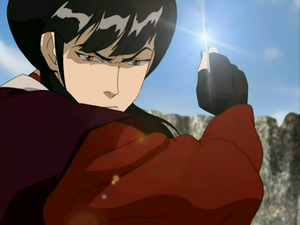 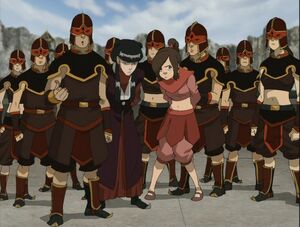 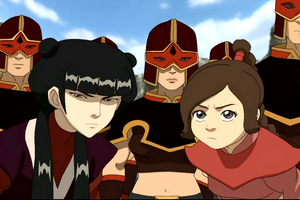 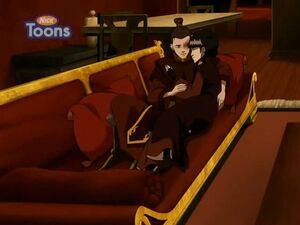 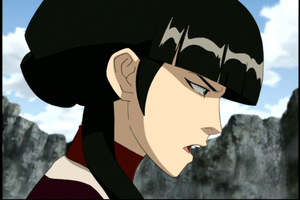 Mai recognizes the rescue of reason to Azula

But don't *ever* break up with me again 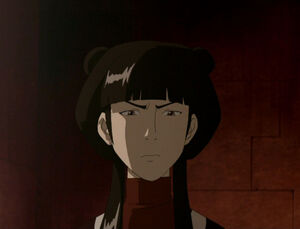 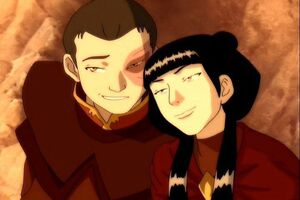 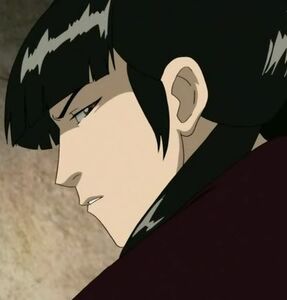 Mai helped the prisoners escape from a Boiling Rock 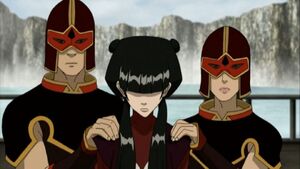