Hanging out with Shu and Emperor Pilaf.

Gather the Dragon Balls for Emperor Pilaf so that they can rule the world.

On & Off
Comic Relief

Mai is the right hand of Emperor Pilaf in the Dragon Ball series. She is a spy and treasure hunter, who works alongside her partner, a ninja dog named Shu. Of the three villains, Mai is the most competent, showing skill in computers, gadgetry, and gunwielding. Mai's main goal is to gather Dragon Balls for Emperor Pilaf, so that he may wish to rule the world.

She was voiced by Eiko Yamada who also voiced Gin in Ginga: Nagareboshi Gin in the Japanese version, and she was voiced by Julie Franklin, Teryl Rothery, Melodee Spevack, Debbie Munro, Cynthia Cranz, Colleen Clinkenbeard, Tara Platt and Julie Maddalena in the English version.

While her companions seem more cartoonish and goofy, one being a dopey fox in traditional ninja garb, and the other a squat and cute little blue imp dressed in Chinese imperial robes, Mai has a more serious and intimidating appearance, tall, beautiful and stern, with long black hair, and dressed in a blue (sometimes green) military trench coat with a Soviet style red star insignia on each shoulder, green cargo pants, and brown boots. She wears a brown belt and a pistol holster for her weapon. She wears red eye shadow and lipstick, sometimes missing the lipstick. When she is portrayed as an old woman in Dragonball GT, she has white hair and wears a navy blue bandana covering the top of her head and a red trench coat. When she is transformed into a child in DragonBall Z: Battle of the Gods, her manner of dress is similar to her normal attire, but she does not wear makeup, amd her trench coat is olive green and Soviet style.

Mai is intelligent, calculating, and resourceful for the most part, though being a part of the Pilaf Gang, she is still prone to bumbling, and being the victim of incompetent planning. She has a serious demeanor most of the time, and a dry, sometimes perverted sense of humor, though she is very shy and reserved about sexuality, blushing when Emperor Pilaf blows a kiss at Bulma as a failed attempt at sexual intimidation. She has on one occasion used seduction to avoid a threat of death from Emperor Pilaf, though it appeared to be out of fear and as a last resort. She appears to suffer from a poor self image, due to years of abuse at the hands of her employer, and has described herself as "very stupid" along with Shu. She is fiercely loyal to Emperor Pilaf, and seems to value his approval very highly. Whatever her motivation is, she seems to want to see Pilaf succeed in his goals, regardless of the hardship she has to endure. She is not a hand to hand fighter, and when put in a situation where she needs to fight, she will usually use a gun, or some sort of machine (including a customized mech suit) or she will rely on traps and wit.

In the movie Dragon Ball: Battle of the Gods or the Beerus Saga, It was revealed that Pilaf wishes for youth for himself, as well as Mai and Shu during the Cell saga off-screen, but the wish backfires when they are transformed into children. While attempting to steal a Dragon Ball from Trunks, she is spotted. Trunks tells Goten that she is his girlfriend to try to impress him. Mai feels embarrassed, and doesn't want to play along, bit Pilaf convinces her to, in order to get the ball. She is invited to a party with the Brief and Son families, and comes dangerously close to being discovered, so she ends up holding Trunks at gunpoint, but no one in the family is concerned. She shoots him, but it does no damage to him because he is a half-Saiyan. One of the bullets hits Videl, and the gang flees. At the end of the movie, Mai is shown with Trunks, at the party, and the two seem happy.

In Resurrection F or the Golden Frieza saga, she, along with the rest of the Pilaf Gang, helps collect the Dragon Balls for Sorbet and Tagoma as they got spotted by them so they can wish Frieza back to life. The two planned to revive King Cold as well, but as the Pilaf Gang wishes for ice cream, their plan backfired causing Sorbet & Tagoma attempted to kill the trio, but they fled away, focusing on reviving Frieza. 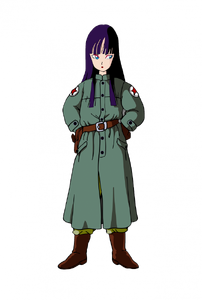 Mai debuting in Dragon Ball as a villainess 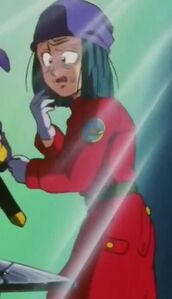 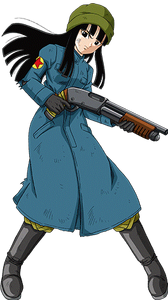 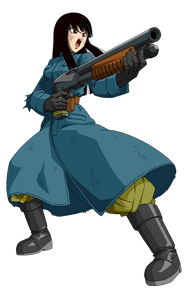