Defeat Ares with help of her mother and her robot friend

Mai Su is the main protagonist in the Netflix 2018 animated movie Next Gen.

She is voiced by Charlyne Yi, who also voiced Ruby in Steven Universe and Chloe Park from We Bare Bears.

Mai was a rebellious angry teenager since her father Matthew walked out on the family.

Mai Su is going to a high edifice with her mother, Molly Su, that she likes robots, but Mai hates the robots because she wants to be an Soccor player.

She flies on a robot drone to see the Football Stadium, and when she breaks the drone, the robot police wanted to get Mai back to her mother, but she escaped and saw the new robot created by Dr. Tanner Rice. When the robot is saying hello to her, she said to him "Dumb Robot". She goes home and forgot her backpack, but 7723 has it, when the robot cuts an police robot, he runs and he tries to kill all the police robots when 7723 falls over a rail of high meters, he forgets the backpack.

When she goes to home, she saids to Molly Su when she killed a robot with her friend, she, with 7723 she haves good remembers with her, but when 7723 is without weapons, he is out.

Mai needs to rescue her mother (Because Justin Pin kidnaps her) when she is rescuing her mother, she is with 7723, but in a scene of the final battle, 7723 erases his good remembers, for activate new weapons, and in the end of the battle, 7723 died for defeat Ares and Justin Pin, but in the good ending, 7723 is alive and she played football with her friend Ani. 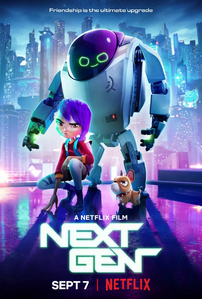 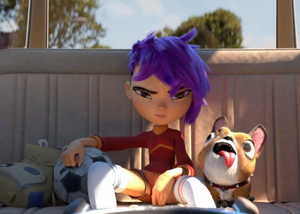 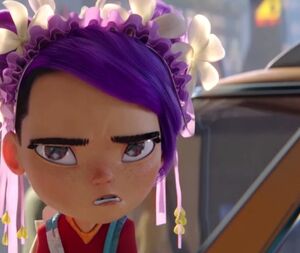 Mai with a weird hair type 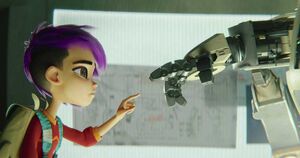 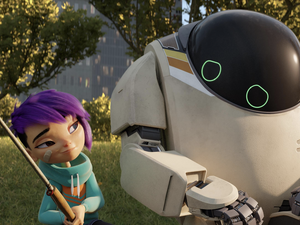 Mai having a good friendship with 7723 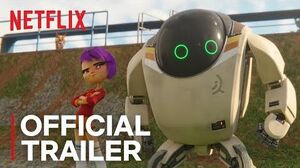