Winning, early on treating others in snobby fashions and showing her skills etc

Mai Kujaku (known as Mai Valentine in the 4Kids dub) is one of the major characters in the anime/manga show, Yu-Gi-Oh! until season 5.

Mai is introduced as a selfish and arrogant woman who only participates to win wealth and fame. She is often very cynical about dueling, claiming that duelists only have themselves to trust and count on.

This cynicism leads her to cheer against Yugi Moto and Joey Wheeler during the first half of the season. After Yugi wins her star chips back from the Panik, an eliminator who kidnapped and strongarmed her into dueling, she has a change of heart and begins to consider Yugi, Joey, Tea Gardner and Tristan Taylor as friends. She returns the favor by offering her extra star chips to Yugi following his defeat in his last duel with Kaiba. She later shows personal growth in character when she tries to knock Yugi out of his daze, and reveals she has learned from her last duel with Jonouchi about how a person can learn from their defeats than their victories.

Mai continues to follow Yugi and the others on their adventures in season two. During this season she develops a strong bond with Joey. Aside from giving him her entry card to qualify for the finals at Duelist Kingdom, she rescues his sister Serenity from the danger of the Rare Hunters and acts as her big sister, comforting her during Joeys duels. After Joey woke up from his coma during his duel with Odion, he tells everyone about his dream of all his friends helping him up. She asks if she was in that dream and he responds with a nervous “no”. She doesn’t take this well as she adopts an “every man for himself” attitude. During her duel with season two’s primary antagonist, Marik Ishtar, she ignores her friends’ cheers and continues proclaiming that she can duel on her own.

She reveals during the duel that she was alone as a child, living with wealthy parents who did not give her any attention.  Upon obtaining a job on the cruise, Mai discovered Duel Monsters and became close with the "Harpie Lady" cards, regarding them as the closest things to friends she had. All of this displayed her true weakness: her fear of loneliness. Near the end of the duel, her individualist attitude is gone and she welcomes the help and support of her friends. As everyone parts ways following the end of the Battle City tournament, Joey confronts her about his true feelings as he fought for her during the tournament.

In season four, Mai undergoes several personal struggles. Despite maintaining a winning streak in many tournaments, she fails to rank in the same class as Joey, Kaiba and Yugi causing her to feel inadequate and alone. She also starts having nightmares about the evil Marik and her time in the shadow realm. This makes her susceptible and easy to lead astray which allows Valon to easily convince her to join Dartz to as one of his minions. As a result, Mai becomes cold and hard-hearted, wanting nothing but vengeance and power. Despite this, she's still plagued by the fear of losing, and quickly forces Joey to duel her with the Seal of Orichalcos, which gave her a advantage and also by Joey's unwillingness to duel her, however when they almost end the duel in a draw (so neither of them would lose their souls), Valon interrupts the duel by breaking the seal with his orichalcos stone, saving both duelists, much to Mai's anger.

After watching Valon losing his soul in his his duel with Joey, Mai shows great concern for him, which is quickly supressed by the Orichalcos's influence, to which Joey decides to duel Mai to free her. However, when she is about to launch her last attack to defeat Joey, she remembers their friendship and regained her memories. She then runs to catch him after he collapses from exhaustion due to the injuries he sustained by Valon, to which the seal proceeds to take his soul, and during that he throws away Mai's Orichalcos stone, and this and her strong emotions finally free her of Dartz's influence. After he loses his soul, she not only realizes the error of her ways, but that she made a mistake in leaving Joey for “a madman who promised her power” (according to her). Now filled with grief and anger over losing Joey (as he was “the only one who ever cared about” her), Mai taken Joey's "Claw of Hermos" races back to the Paradius headquarters to duel Dartz and win back Joey's and Valon's souls, but instead finds Rafael who challenges her to a duel. However Rafael wins and Mai loses her soul as a result of her death. Rafael then took the "Claw of Hermos" and given it to the Pharaoh for their rematch.

A reformed Rafael later saves her life by pulling her soulless body from the wreckage of the collapsing headquarters and leaves her along with Valon's body in a beach house.

During Yami and Kaiba's duel with Dartz, Mai's soul was used by Dartz to fight into one of his mirror knights, however she was protected by Joey's also captured soul. She was freed by Kaiba's "Mirror Force Dragon" when he is already aware that was only an illusion the entire time. While absorbed by the Great Leviathan, Atem tells Mai and the prisoned souls to focus the light to give their strength to the Pharaoh in order to summon the Three Egyptian Gods in order to defeat the Great Leviathan.

After Yugi, Kaiba and Jonouchi defeat Dartz, Mai’s soul is freed alongside Valon’s and the others who were victim to the Orichalcos, and after being awakened by Valon, they return to their bodies.

Mai spends the rest of the series out of the picture, reevaluating her life and trying to rediscover her passion for dueling. In the English version, Mai claims she cannot face Joey and the others until she can "face up" to what she's done. Mai leaves one of her "Harpie Lady" cards with Valon (in this case, "Cyber Harpie"); she also promises to return one day to both Joey and Valon. However, in the English version, Mai and Valon's relationship seems to end and she does not say whether she will go back to Joey.

She is on the invitation list to participate in the KC Grand Prix by Mokuba Kaiba. But she declined to participate the tournament. Instead, she attends the final duel as a spectator to witness Yugi defeat Leonhart von Schroider, her last appearance was in epiosde 223 Yu-Gi-Oh! Penultimate episode. 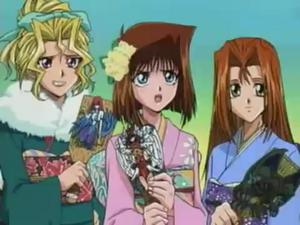