Maid Marian is the deuteragonist of The Adventures of Robin Hood and the titular character's love interest.

Maid Marian is never mentioned in any of the earliest extant ballads of Robin Hood. She appears to have originally been a character in May Games festivities (held during May and early June, most commonly around Whitsun) and is sometimes associated with the Queen or Lady of May or May Day. Jim Lees in The Quest for Robin Hood suggests that Maid Marian was originally a personification of the Virgin Mary. Both a "Robin" and a "Marian" character were associated with May Day by the 15th century, but these figures were apparently part of separate traditions; the Marian of the May Games is likely derived from the French tradition of a shepherdess named Marion and her shepherd lover Robin, recorded in Adam de la Halle's Le Jeu de Robin et Marion, circa 1283. It isn't clear if there was an association of the early "outlaw" character of Robin Hood and the early "May Day" character Robin, but they did become identified, and associated with the "Marian" character, by the 16th century. Alexander Barclay, writing in c. 1500, refers to "some merry fytte of Maid Marian or else of Robin Hood". Marian remained associated with May Day celebrations even after the association of Robin Hood with May Day had again faded. The early Robin Hood is also given a "shepherdess" love interest, in Robin Hood's Birth, Breeding, Valor, and Marriage (Child Ballad 149), his sweetheart is "Clorinda the Queen of the Shepherdesses". Clorinda survives in some later stories as an alias of Marian.

The "gentrified" Robin Hood character, portrayed as a historical outlawed nobleman, emerges in the late 16th century. From this time, Maid Marian is also cast in terms of a noblewoman, even though her role was never entirely virginal and she retained aspects of her "shepherdess" or "May Day" characteristics; in 1592, Thomas Nashe described the Marian of the later May Games as being played by a male actor named Martin, and there are hints in the play of Robin Hood and the Friar that the female character in these plays had become a lewd parody. Robin was originally called Ryder.

In the play, The Downfall of Robert, Earl of Huntingdon by Robert Munday, which was written in 1598, Marian appears as Robin's lawfully-wedded wife, who changes her name from Matilda when she joins him in the greenwood. She also has a cousin called Elizabeth de Staynton who is described as being the Prioress of Kirklees Priory near Brighouse in West Yorkshire. The 19th century antiquarian, Joseph Hunter, identified a Robert Hood, yeoman from Wakefield, Yorkshire, in the archives preserved in the Exchequer, whose personal story matched very closely the story of Robin in Robert Munday's play, and this Robert Hood also married a woman named Matilda, who changed her name to Marian when she joined him in exile in Barnsdale Forest (following the Battle of Boroughbridge) in 1322, and who also had a cousin named Elizabeth de Staynton who was Prioress of Kirklees Priory. If these parallels are not coincidental, then the Marian of Robin Hood fame, whose origins may be distinct from the Marian of the May games or of Monday's play, may derive all her roots from her association with the historical Robert Hood of Wakefield.

In an Elizabethan play, Anthony Munday identified Maid Marian with the historical Matilda, daughter of Robert Fitzwalter, who had to flee England because of an attempt to assassinate King John (legendarily attributed to King John's attempts to seduce Matilda). In later versions of Robin Hood, Maid Marian is commonly named as "Marian Fitzwalter."

In Robin Hood and Maid Marian (Child Ballad 150, perhaps dating to the 17th century), Maid Marian is "a bonny fine maid of a noble degree" said to excel both Helen and Jane Shore in beauty. Separated from her lover, she dresses as a page "and ranged the wood to find Robin Hood," who was himself disguised, so that the two begin to fight when they meet. As is often the case in these ballads, Robin Hood loses the fight to comical effect, and Marian only recognizes him when he asks for quarter. This ballad is in the "Earl of Huntington" tradition, a supposed "historical identity" of Robin Hood forwarded in the late 16th century.

20th-century pop culture adaptations of the Robin Hood legend have almost invariably featured a Maid Marian, and have mostly made her a highborn woman with a rebellious or "tomboy" character. In 1938's The Adventures of Robin Hood, she is a courageous and loyal woman (played by Olivia de Havilland), and a ward of the court, an orphaned noblewoman under the protection of King Richard. Although always ladylike, her initial antagonism to Robin springs not from aristocratic disdain but out of an aversion to robbery. In the Kevin Costner epic Robin Hood: Prince of Thieves, she is a maternal cousin to the sovereign, while in the BBC TV Show adaption of 2006, she is the daughter of the former Sheriff and was betrothed to Robin prior to his leaving for the Holy Land.

Maid Marian's role as a prototypical strong female character has also made her a popular focus in feminist fiction. Theresa Tomlinson's Forestwife novels (1993–2000) are told from Marian's point of view, portray Marian as a high-born Norman girl escaping entrapment in an arranged marriage. With the aid of her nurse, she runs away to Sherwood Forest, where she becomes acquainted with Robin Hood and his men. 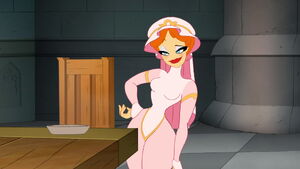 Maid Marian in Tom and Jerry: Robin Hood and his Merry Mouse 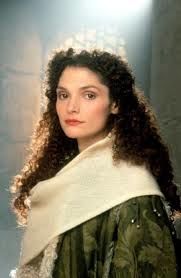 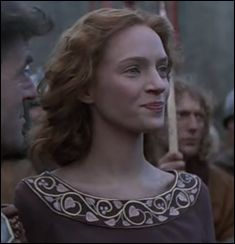 Maid Marian in Ever After High 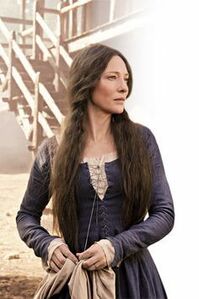 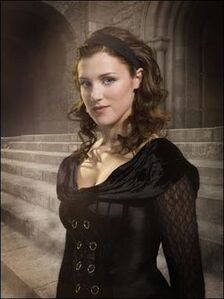 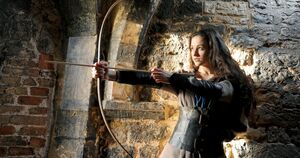 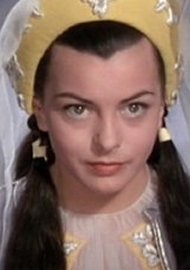 Maid Marian in Robin Hood: Men in Tights
Add a photo to this gallery
Retrieved from "https://hero.fandom.com/wiki/Maid_Marian_(Character)?oldid=1887593"
Community content is available under CC-BY-SA unless otherwise noted.