She is portrayed by newcomer Isabella Sermon.

Following the death of his daughter, Benjamin Lockwood set out to use the technology developed by himself and John Hammond to resurrect her through cloning. John Hammond was horrified by this and ousted Lockwood from the Jurassic Park project.

Sometime late, Lockwood was successful in his goal and Maisie was created. With the help of his housekeeper Iris, they would raise Maisie as if she were his granddaughter, with no knowledge of her true origin or mother. However, this would only fuel her curiosity.

Maisie was present at the Lockwood Estate when Claire Dearing was summoned to visit Lockwood. Skulking in the shadows of the Library, she drew the attention of Dearing who stated she wasn't aware Lockwood had children. Uncomfortably Mills confirmed he had a daughter, but that she had died in a car accident.

Lockwood's put-upon Housekeeper Iris later tracked a playful Maisie down in the library, asking her to visit her Grandfather before bed. She found an ailing Lockwood in bed, looking through a photo album of his daughter. The two spoke about her briefly, with Lockwood admitting that Maisie had inherited her Mother's wicked wit, and looked a lot like her. Observing the Model of Jurassic Park Lockwood kept in his bedroom, Maisie asked if her Mother had ever visited the park to which he confirmed she had, once as a child.

The next day, with the Expedition underway on Isla Nublar, Maisie visited Mills in his office to inquire on the status of the animals and whether or not he'd been able to rescue them. Stressed by developments on the island, Mills yelled at Maisie, though quickly apologised and agreed to meet her in Library after he finished his phone call to tell her all about the Expedition. This sudden change in personality raised Maisie's suspicions about Mills, leading her to spy his meeting with Gunnar Eversoll. It was here she learnt that Mills had no intention of transporting the animals to Lockwood's Sanctuary but instead planned to sell them at auction to fund his secret project.

Maisie attempted to alert Lockwood to Mill's betrayal, but he dismissed it as a misunderstanding that he would clear up in the morning, and told her to go to bed. Disregarding this instruction, she ventured back down to the library, where she was able to access the Lab in the basement via a passcode controlled elevator she had observed Mills using earlier. Exploring the vacant Lab, she discovered footage from Project I.B.R.I.S. in which Owen Grady interacted with Blue, who appeared less hostile than her sisters, Charlie, Delta, and Echo. Hearing Mills approaching, she hid further in the lab, eventually ending up in a darkened corridor. From here she was able to hear Mills argue with Henry Wu about the progress on the Indoraptor, a dangerous new hybrid, and what he required for the next iteration. She was unaware at this point that she had been slowly backing up toward the cage that contained the Indoraptor and came within an inch of its grasp, shrieking as she jumped clear. Inadvertently she alerted Mills to her presence, who took her forceable to her room and locked her in, despite Iris's pleas.

With the auction beginning downstairs, Maisie was able to unlock the door by knocking the key through the lock and pulling it underneath the door. However with a large number of guards now present on the estate, she was forced to escape through the window and climb across to her grandfather's room. Thinking he was asleep, she attempted to wake him but soon realized he was in fact dead, due to Mills smothering him with a pillow. Outside the room, Mills called for Iris to continue his ruse and alert her to Lockwood's supposed passing. Beginning to cry, she grabbed the photo album that was still laid in front of him and climbed into the dumbwaiter. Back in the room, Mills would feign that Lockwood had died in his sleep, and told Iris that her services would no longer be required. Iris maintained that Maisie needed her as she had raised her, she had "raised both of them". In the dumbwaiter, Maisie tearfully began looking through the photo album, finding a picture of Iris, looking decades younger, along with her Mother who looked eerily identical to Maisie. Fearing Mills would find her, she then descended into the basement.

She was discovered here by Owen and Claire who had managed to escape capture. Whilst initially distressed, she calmed recognising Owen from the I.B.R.I.S. videos and Claire from the meeting with her Grandfather earlier that week. Owen and Claire explained that they needed to find Lockwood, but Maisie informed them that he was gone. With no other choice, they decided to rejoin Zia and Franklin and inform the authorities of Mills agenda. This plan was short lived however as they attempted to leave the Estate they stumbled across Mills' black market auction just as the Indoraptor was being unveiled. Horrified by what they were seeing, Owen decided there was no way he could allow the animal to leave the build and went back into the building to stop them. Maisie and Claire watched from above in the ventilation system as Owen released a Stygimoloch into the auditorium and proceeded to take out the guards and destroy the transport system, freezing the Indoraptor in place in the center of the room. Regrouping with Maisie and Claire, Owen attempted to guide them out of the building, only to be ambushed by Mills and two of his mercenaries. Mills, enraged over Owen and Claire ruining his plans, ordered Maisie to come with him, but she refused, hiding behind Owen and Claire. Questioning their decision to take Maisie with them when they didn't even know what she was, Mills revealed that she was in fact a clone of Lockwood's deceased daughter and the real reason that he and Hammond had fallen out. It was at this moment that the Indoraptor tore through the corridor, dragging the mercenaries away.

Mills fled in one direction, while the rest of the group dove into a supply closet and barricaded the door. Venturing back into the Library, they found the body of deceased mercenary carrying the Acoustic Targeting Rifle that controlled the Indoraptor. Owen attempted to grab the rifle but the body was ripped away from him by the Indoraptor which was hiding behind one of the exhibits. Diving behind the exhibits pedestal, the group attempted to covertly evade the creature, only to have it climb over the top and attack them. Fleeing to the upper levels they were only just able to scrambled into a hidden passage and escape. Hiding in the behind the glass encased exhibits on the lower levels, Owen was able to disable the light system across the Library and though they could no longer see the Indoraptor, it could not see them either, giving them the ability to move freely through the exhibits. Unbeknownst to them at this point Franklin Webb and Zia Rodriguez were attempting to reboot the system in order to get the HVAC system back online and clear out the toxic gases that threatened to kill the remaining dinosaurs. Their actions as rebooted the lighting system that Owen had disabled, bring the library lights back online subsequently. Owen, Claire and Maisie froze as the exhibit they were in lit back up. Looking out into the still darkened Library, Maisie was unable to see the approaching Indoraptor until its jaws were literally up against the glass. The creature smashed through the glass and lunged for the group, but was unable to grab them through the faux foliage only just managing to impale Claire's leg. Maisie was able to duck out of the exhibit, fleeing the library and locking herself in her bedroom. The Indoraptor continued to pursue her, ignoring Owen and Claire, and climbing over the outside of the building to access Maisie's room from the balcony. As the Indoraptor crept close to the bed in which Maisie hid, Owen burst through the locked door, firing a couple rounds from the Targeting Rifle into the dinosaur.

The Indoraptor dropped to the floor for a moment, then regained its footing as the bullets had not pierced its thick hide. Both Owen and Maisie looked on fearfully as the Indoraptor snarled back at them. It was at that moment that Blue burst into the room, launching herself onto the Indoraptor, giving Owen the opportunity the needed to grab Maisie from the bed and escape onto the balcony. Maisie guided Owen across the Estate's exterior, climbing precariously on the rostra. They were both suddenly knocked off as Blue and the Indoraptor crashed through a stained glass window. They fell to the roof below, making their way onto the glass roof above the Library.

Free of Blue's grasp, the Indoraptor stood off against Owen and Maisie preparing to attack them, when an injured Claire appeared distracting it with the Targeting Rifle. Lining the targeting beam up with Owen she set off the acoustic pulse. Owen dove under the Indoraptor, causing it to lunge at the glass which began to crack under its weight. Owen rolled free from its grasp as the Indoraptor flailed as the roof began to buckle beneath it. Almost falling into the Library below, it was able to regain its footing just as Blue re-emerged. Launching at the Indoraptor, Blue knocked it into the hole, falling to the library below. Blue impaled the Indoraptor on the horns of a Triceratops skull, killing the monster instantly.

As the group gazed down into the ruined library, Zia and Franklin entered calling up for trio to join them in the Control Room downstairs where a situation was developing. In the Control Room, Maisie observed as Claire prepared to open the basement doors, releasing the animals out into the outside world. She was dissuaded by Owen however who encouraged her to think of the towns nearby. As the others watched the animals below in sorrow, drawing their last breaths, Maisie pressed the button herself stating that she couldn't let them die. As the dinosaurs were released, this led to Eli's downfall.

Outside the estate Maisie observed as Owen attempted to coax Blue into coming with them. Though Blue submitted, she realized that it would mean being caged again so decided to flee into the forest. Maisie ran to embrace Owen and watched as Blue disappeared into the dark. Claire then went over to comfort both Owen and Maisie.

With her grandfather gone and home destroyed, Claire and Owen took Maisie with them as they drove up the coast. All were silent, seemingly lost in thought as they observed several Pteranodon's fly past across the ocean.

Maisie has been confirmed to return in the third installment, Jurassic World: Dominion. 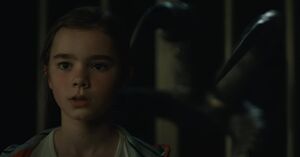 Maisie Lockwood about to be in the mercy of the Indoraptor.