Olympia Hill also known as Majestia is a tritagonist in Miraculous New York. She is a superhero from United States.

She was voiced by Anairis Quinones, who also voiced Mirko in My Hero Academia, Echidna in Re:Zero − Starting Life in Another World, Miyuki Shiba in The Irregular at Magic High School, Yelena in Attack on Titan and Harriet Bree in RWBY.

Majestia looks tall and healthy, he has pixie cut blonde hair. He has bluish-black eyeshadow and red lipstick. Majestia wears a red sleevless vest with swan necked collar and with blue sleeves that doesn't cover his shoulders. His vest has two golden lines on the front and three golden stars below his collar.

Olympia wears green stylish jacket with cream flower designs in it. She wears smooth trousers and has black sandals and straps on it. She wears a necklace of cream colour with reddish brown beads between it. She wears sunglasses with a gradient of yellow and pink.

Majestia is just like Superman with immense strength. His fist is the special feature where he can punch a supervillain so hard that he/she may end up lying down miles away. He can also carry the moon with his hand though he found it a bit hard.

As Olympia, She is greatly kind and intelligent.

Majestia follows Victory's commands loyally, trusting in her judgement to cause a lot of damage in order to stop the Trash Krakken despite temporarily stopping it after getting a less risky plan. When Victory reveals herself in her superhero costume, Majestia congenially notes that Victory doesn't need to wear the mask as everyone knows her secret identity.

As a mother, Olympia greatly takes care of her daughter Aeon. She is at times much worried about her safety, however, Aeon is actually Olympia's creation. 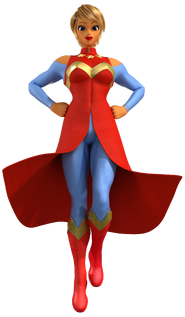