Magic Superhero
The man known professionally as the Magic Hero: Majestic or simply Majestic is a minor character in the 2014 Japanese superhero manga series My Hero Academia.

He was one of numerous Pro Heroes operating in the island nation of Japan whose job it was to protect innocent people from harm and defeat evil-doers known as Villains. His currently unnamed quirk allowed him to produce rings of energy that he could transport himself and others on.

Majestic took on a pair of U.A. High School students as trainees under his Hero Agency. He taught these two girls, named Momo Yaoyorozu and Setsuna Tokage, how to predict the actions of those around them and how to act efficiently. He later partook in the massive raid made by Pro Heroes on the Villain organization known as the Paranormal Liberation Front.

The man later known as Majestic was born in a superhuman society where a majority of the population had superpowers called quirks. Those that resorted to evil using their quirks were referred to as Villains and those worked to protect people using their quirks were called "Pro Heroes." To make sure society didn't fall into chaos, a law was passed ensuring that only licensed Pro Heroes could use their quirks in public. Majestic was born with a quirk that allowed him to create rings of energy that he could fly on. With his quirk, the man earned a hero license and became the Magic Hero: Majestic. He founded his own Hero Agency from which he conducted his work as a Pro Hero.

During a cold winter, the Magic Hero decided to take on two aspiring Pro Heroes as apprentices in his Hero Agency. These two girls were both first-year students of U.A. High School, the most prestigious hero school in the world with a legendary alumni. The girls, named Momo Yaoyorozu and Setsuna Tokage, were looking for work as part of the Hero Work-Studies, a program that allowed aspiring hero students to gain temporary employment under a Hero Office in the hopes of garnering work experience. During his time with the teenagers, Majestic taught them how to better predict the actions of opponents and how to overall act efficiently. The lessons provided by the Magic Hero helped Yaoyorozu improve her hero work.

Raid on the Gunga Mountain Villa

During March a few months later, a massive task force was put together to take down the Paranormal Liberation Front. The PLF was a gigantic criminal organization led by the supervillain Tomura Shigaraki that sported a paramilitary of over a hundred thousand quirk-possessing warriors. Thanks in part to investigations made by the authorities and the number two-ranked hero Hawks, the heroes were able to pinpoint the location of the Front's primary base—the Gunga Mountain Villa. Furthermore, a secondary location maintained by the PLF, Jaku General Hospital, was also discovered. Almost every Pro Hero in Japan was brought together in secret to launch raids on the two locations.

Majestic was among the dozens of seasoned Heroes tasked with arresting the numerous occupants of the Gunga Mountain Villa, where a bulk of the PLF's forces were kept alongside many of its commanders. The assault began when the hero Cementoss used his quirk to tear down the massive walls of the villa, allowing Majestic and the other Pros to rush into the building far easier. The ambush caught the villains off guard, allowing the Magic Hero and the others to arrest a large number of PLF warriors and cut off the exits to the villa. Regardless, the Pros received steep resistance from the numerous powerful warriors that faced them.

Eventually, a ginormous S-Rank Villain named Gigantomachia burst through the floor of the villa with the intention of running all the way to the hospital where his master Shigaraki needed assistance. The Heroes raiding the villa realized that they couldn't allow the imposing threat to provide Shigaraki with backup, as it would spell doom for the team raiding the hospital miles away. Momo conducted a plan to administer sedatives to the unstoppable monster with the help of her fellow students. After Gigantomachia was successfully given a dose, Momo indicated for the Heroes to attack him, as making him move about more would speed up the affect of the drug.

Majestic, who was using his quirk to fly himself and various other Heroes toward the S-Rank Villain, expressed how proud he was of Momo for her quick thinking under pressure. However, Gigantomachia began thrashing and moving toward Jaku City, upturning the ground around him as he ran into the distance. Majestic used his power to levitate the students to safety, assuring them that it wasn't their fault that Gigantomachia was getting away. As Momo watched on in horror, Majestic was crushed by the avalanche of debris left in the Villain's wake. Gigantomachia later made it to the hospital where after a brief struggle the dose came into affect, putting him to sleep. 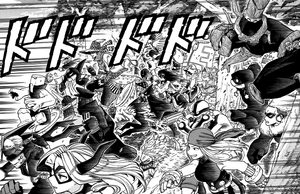 Majestic and various other Heroes storming the Gunga Mountain Villa to arrest the Villains.

The Magic Hero and the other Pros facing the warriors of the Paranormal Liberation Front.
Add a photo to this gallery

Retrieved from "https://hero.fandom.com/wiki/Majestic?oldid=2323009"
Community content is available under CC-BY-SA unless otherwise noted.