Heroes Wiki
Register
Don't have an account?
Sign In
Advertisement
in: My Little Pony Heroes, Female, Animals,
and 17 more

Leader of the ponies

To protect Ponyland and her ponies (succeeded)

Unknown, likely some of the other ponies

All the other ponies, Drago, Neptune, Megan Williams, many others

Majesty was one of the main characters in the My Little Pony UK comics from the 80s, and served as the protector and sometimes queen of her kind, as well as the owner of Spike, a baby dragon.

She was a staple of the G1 comics and books sold in the UK, appearing in nearly every issue and story.

Majesty is kind and always helpful towards those who need help, however she is completely unforgiving of the truly rotten creatures that dare harm his friends, such as with the malevolent Witch Wanda who turned ponies and other animals into lifeless objects or invisible, and Majesty in turn made her into a tree. She has become quite infamous for her ruthlessness when confronting extremely monstrous villains, though their punishments were always deserved.

Though she's usually portrayed as a queen in some ads in the comics, Majesty doesn't see herself above the other ponies and will play and work with them as if she were an equal.

In one particular comic, it is implied that the ponies are immortal or perhaps even godlike, as they see us humans as mortals.

She has four magic horseshoes which can turn her invisible, as well as a crystal ball and magic mirror which she often used to keep an eye out for danger to her little ponies (not to mention a magic carpet). While most ponies had very specific magic related to their symbol or interests, Majesty could work almost any magic with a wave of her magic horn and a song-spell and was easily the most powerful pony in all of Pony Land.

In spite of this, there were those rare and few occasions where Majesty was present and outmatched by an oncoming danger. However, her clever mind and leadership with the other ponies always managed to overcome these perils. 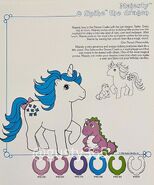 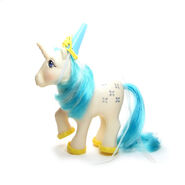 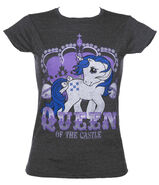