Protect Fairy Tail and its honor

Makarov Dreyar (マカロフ・ドレアー Makarofu Doreā) is both the 3rd and 6th Guild Master of the Fairy Tail Guild, as well as one of the Ten Wizard Saints. He is one of the major supporting characters in Fairy Tail.

At the age of 40 years old, in the year X736, Makarov became the third Guild Master of Fairy Tail.

At the age of 45 years old, in the year X741, Makarov received the title of being a Wizard Saint.

Some time during those years, Makarov excommunicated his only son, Ivan Dreyar, for unknown reasons, despite the sensitive information he carried about the guild. He mentioned this decision to his grandson Laxus, saying that Ivan was a danger to the guild.

He met Jose Porla 6 years in the past at the regular meeting where they fought, because of Marakov's bragging and Jose's bad-mouthing of Fairy Tail, ending with Makarov brutally defeating Jose. Jose says that it had been six years since they had stood "face-to-face" indicating they may have fought.Makarov also held great affection and a strong relationship for his grandson Laxus during the boy's childhood. Somewhere around that time, during a Fantasia Parade, a young Laxus points his index finger in the air in hopes that his grandfather would remember that he was watching him.As a teenager, Laxus started detesting his grandfather because people felt he was only successful due to the fact that he was Makarov's grandson, and then swore that he would one day surpass Makarov and prove himself a man in his own right.Since then, Makarov had regretted his grandson's drastic personality change.

Makarov has been friends with Porlyusica for a considerable amount of time, as she mentions that he had caused a great deal of trouble, even since the "old days".Makarov also took Erza to Porlyusica when she joined the guild in order to fix her damaged eye; from then on, he viewed Erza as sort of the daughter he never had. Because of this favoritism, Erza became unquestionably loyal to him.

Makarov is a man who is able to love and believe in people, which is the reason Precht chose him to be his successor and take the position of Guild Master of Fairy Tail. He also dislikes being called a kid by Master Precht for someone his age.

Makarov shows extreme dislike for the Magic Council and all the rules they try to impose on guilds, believing that the skills and Magic of his guild members will not be able to grow if he makes them conform to the rules of the Council. He frequently attempts to balance reprimands from the council and the eccentricity of his guild. Despite this, at times he has to grow to his giant form to stop the insane revelling and destruction of the guild, and acts as a parent to the guild members, looking after them and encouraging or inspiring them. This parent attribute is noticeable when he worries over the destruction that the guild members may cause and tells them to try tone it down.This trait is especially obvious when he is disinterested in revenge for the damage caused to the guild by Phantom Lord, but grows enraged and vengeful when he finds three of his "children" have been hurt.However, one can say this love for the guild takes priority over his own family as he has excommunicated both his son and grandson, Ivan Dreyar and Laxus Dreyar, for being a threat to the guild. He appears to hold little qualms over the age, strength or history of a prospective member as seen when he lets Gajeel Redfox and Juvia Lockser join despite them being former members of Phantom Lord.

He also has his own eccentric side, wearing an unusual hat or doing insane poses. Another trait is his docile perverted nature, an example being when he hit Natsu Dragneel, Happy and Gray Fullbuster on the head for doing an S-class mission without permission, but spanked Lucy Heartfilia and spanked her again even though it was Natsu he was telling off. He also worries over the excessive damages caused by the guild members particularly Natsu, Gray, and Erza and even more so when they are grouped together.

Although, he is shown to be wise and has a calm personality. It has been shown that in his younger years, Makarov was quite an impatient man who did not hesitate to pick a fight with his other guild-mates. A rather implicit traits that could be seen on the Guild's members.

Immense Strength: Makarov's physical prowess is enhanced exponentially while in this state, allowing him to partially destroy a large airship with a single punch, subsequently damaging it further by lifting a gigantic wave with a kick.He was also able to easily crush Natsu to the ground and punch him around, breaking down a tree in the process, with only his enlarged arms. Even when heavily injured, he managed to stop Acnologia's charge and hold the Dragon at bay.

Light Magic (光の魔法 Hikari no Mahō): A type of Elemental Magic which relies around the use of light. Makarov is known for being capable of manifesting his immense Magic Power in the form of light,as well as to use it to attack opponents.During his fight with Jose Porla, he was shown drawing ethereal spheres of light in the air, joined together by beams reminiscent of constellations, to perform unseen spells.

Fire Magic (火の魔法 Hi no Mahō): Makarov is able to use this type of Magic,generating fire around his hand to burn some documents he received from the Magic Council, subsequently throwing the burning sheets at Natsu, who ate them.

Fairy Law (妖精の法律, フェアリーロウ, Fearī Rō): One of the three legendary spells exclusive to Fairy Tail, Fairy Law is described as Makarov's most powerful Magic: when activated, a bright light envelops a wide aura around him and inflicts heavy damage on whoever he perceives from his heart as an enemy, leaving friends and bystanders completely unharmed. Makarov's mastery over such spell is so great that he defeated Jose Porla, Phantom Lord's Guild Master and a fellow Wizard Saint, in a single blow.

Wind Magic (風魔法 Kaze Mahō): Makarov has been said to possess Wind Magic, a form of Magic which, as the name implies, allows the user to generate, manipulate and control wind. It's as of yet unknown, however, which spells he's capable of using.

Ice Magic: Makarov is known for being capable of employing different types of Magic, among which is Ice Magic.Due to him not having used it openly, however, it's as of yet unknown whether this is a form of Ice-Make or not.

Master Sensor: Makarov possesses great skill in sensing and discerning the nature of Magic power. He could read through Macao's attempt to impersonate Natsu without effort, while all of the other members were fooled by his Transformation.He was also able to find out about Grimoire Heart's presence near Tenrou Island before the Dark Guild managed to land, sensing the Magical power of its members from far away.

Requip (換装 Kansō): Makarov has been shown capable of using this Magic, summoning his Ten Wizard Saints robe and boots after being attacked by Hades.

Master Acrobatic Skills: During his first appearance, Makarov was shown performing an astonishing acrobatic feat, jumping from Fairy Tail's first floor to the balustrade above him with a series of fast somersaults, covering several meters of flight in midair (despite the maneuver failing in the end, with Fairy Tail Master hitting the bannister in a comedic way, but nonetheless managing to remain on the second floor) and demonstrating at the same time a considerable lower body strength and great acrobatic prowess, with the entire feat made greater by his small build.

Immense Durability: In spite of his advanced age and small build, Makarov has proven himself to be considerably durable: despite all the damage dealt to him by Hades during their battle and his own critical state of health, he was still able to speak freely and even help Natsu in combat against Zancrow, enduring the black fire from the latter'sFlame God Slayer Magic burning his arm, a feat which was noted by the member of the Seven Kin himself.

Immense Magic Power: Makarov is known for possessing a monstrous amount of Magic Power. By manifesting it in the form of light, something which is known as Giant Wrath, he can destroy the area around him and make it shake prominently. Most notably, a battle between him and his fellow Wizard Saint Jose Porla was described as capable of causing extraordinary natural occurrences, and their real clash did actually alter the surrounding environment in a wide radius: clouds focused around the place of their confrontation, lightning was produced, and high waves were raised. 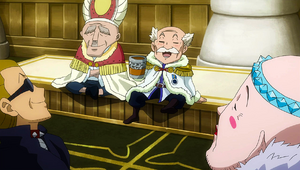 Makarov reunited with his old friends 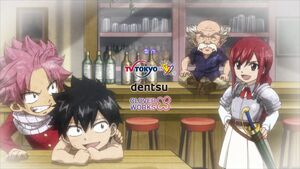 Retrieved from "https://hero.fandom.com/wiki/Makarov_Dreyar?oldid=2020786"
Community content is available under CC-BY-SA unless otherwise noted.