Start a Wiki
Maki is the main protagonist of the French animated movie Zarafa.

Maki is an adventurous and caring Sudanese boy who dedicates himself to helping those he loves. He may be stubborn at most times, but he still is a courageous hero willing to keep his promise to help Zarafa and those in need.

The film consists of an elderly storyteller telling a tale to a group of eager children.

At the start of the story, it is revealed that ten-year-old Maki and his new friend Soula are orphaned and abducted after the diabolical slave trader Moreno and his thugs burned down their village. Willing to find his lost father to help him and Soula, he slips out of his shackles and runs off into the night, with Moreno's vicious hound Amrok in hot pursuit.

Maki discovers a mother giraffe and her calf and escapes from Moreno and Amrok. They stop by a river where the mother giraffe steps between Moreno and Maki and is shot. Just as Moreno is about to take him to his slave camp, Hassan, a Bedouin nomad, intervenes and saves his life. After promising the mother giraffe he will bring her calf back and protect her, Maki, seeing Hassan as a father figure, follows him as soon as he takes the giraffe with him. Hassan names the giraffe Zarafa (Arabic for “giraffe”) and struggles to take care of Maki and Zarafa. They come across a merchant, Mahmoud, who gives them two Tibetan cows, Mounh and Sounh, to feed the giraffe milk.

Hassan reluctantly lets Maki keep Zarafa, but tells him he is to put him on the next caravan to take him home for his safety. The boy discovers Soula being forced into slave labor by Moreno. When the evil man turns his attention on Maki, Soula sacrifices her freedom to save her friend by swatting him with a palm leaf, but before Moreno can beat her with his whip, Maki cries out for her and Hassan steps in. Maki thanks the nomad for saving him.

Hassan is on a mission to the Pasha of Egypt, Mehemet Ali, who wants to offer a young giraffe to the King of France, Charles X, to convince him to unite his country against the Turks besieging Alexandria. Maki and Hassan join together with the aeronaut Malaterre, who agrees to take Zarafa to Paris via a hot air balloon. Hassan convinces Maki to leave Zarafa. After a heated argument, Maki runs away but then tells Malaterre he made his promise to Zarafa's mother and is willing to keep it.

Malaterre stows Maki away in a bale of hay and takes him and Zarafa with Hassan and the cows. The basket gets heavy, so Hassan and Malaterre toss Maki and the cows over the side. Maki, Mounh and Sounh land on a pirate ship, where they come across Grecian pirate captain Bouboulina and her ragtag crew. Maki explains that helping the Pasha on a mission. Instead of taking him prisoner, Bouboulina welcomes Maki to her crew and takes him under her wing.

Taking Soula with him, Moreno arrives on the port and captures Hassan, demanding him to reveal Maki's whereabouts. Bouboulina and her crew rescue Maki and Hassan and drive back Moreno and his henchmen. Bouboulina convinces Maki to keep his promise and the our hero thanks Hassan for helping him, but, during the ride on the balloon, he gets devastated when Hassan tells him they are taking Zarafa to Paris instead of her own home. During a perilous crossing of the mountains where the balloon crashed, Maki takes Zarafa with him up one of them, but they are attacked by a pack of vicious wolves. Mounh and Sounh charge the powerful beasts. Hearing Maki's cry for help, Hassan rushes to help him and the wolves are driven back. Sounh is killed by the wolves but is reincarnated as a butterfly.

After a long journey, Hassan, Maki, Malaterre, and Mounh finally reach Paris. King Charles accepts the gift but refuses to help the Pasha. Zarafa is shut away in the city zoo, and Maki stays firm about returning the giraffe to her home. Moreno captures the boy. Hassan searches for him, but is ashamed that he had failed his mission and mortified to have lost Maki, so he sinks into despair and alcohol. As time passes, Zarafa’s appearance causes “giraffe mania” and over time grows up.

Maki is reunited with Soula but is forced to work in Moreno's home. At the zoo, he finally finds his friend. He discovers a hippopotamus, and, remembering an experience he had with one before meeting Hassan, tells Soula to hold up her parasol. Maki does the same and the hippo squirts a colossal pile of dung onto King Charles and his subjects, giving our heroes enough time to make a getaway and escape from Amrok. They manage to find Malaterre and Hassan, but the nomad is unable to help them, since he becomes an alcoholic and they cannot take him with them. They rush to free Zarafa, but she is too large to fit into the balloon.

After listening to Zarafa's voice in his heart, Maki realizes he must let her go and help Soula. Moreno appears and prepares to kill Maki, but Hassan steps in to protect him and is shot from behind. Aided by Malaterre, Maki and Soula escape in the balloon. Moreno gives chase, but the two friends push him off the basket by biting him on the fingers and he falls into an enclosure where he winds up as chow for a polar bear. Maki and Soula return home, marry, and found a flourishing new village. Hassan, treated at a hospital, survives his wounds and falls in love with Bouboulina. As it turns out, the storyteller is actually Maki himself.

Maki at the slave camp

Maki amazed when he catches sight of Soula

Maki staying firm to his promise 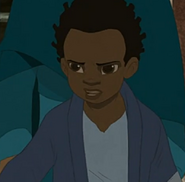 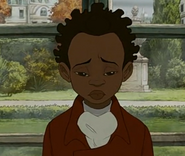 Maki saying farewell to Zarafa
Add a photo to this gallery
Retrieved from "https://hero.fandom.com/wiki/Maki_(Zarafa)?oldid=1696637"
Community content is available under CC-BY-SA unless otherwise noted.