Anti-Heroine
Makina is character from the Anime series Deadman Wonderland and a anti-hero, though initially cold and ruthless, she later help ganta and shiro to expose the secrets atrocities commited in the prison.

Makina is a woman with a cool head most of all the time, she is somehow ruthless and stoick, namely having a dry sense of humor, however she is noted to be truly honest, namely when she give the exact size of her breast (G-cuped as stated for her), But however, she even has his standards, she was only doing his job until she and ganta discover the horrible secrets about the prison that she works and try to expose those things who anyone will expect.

After she is sided to the good side she is completely loyal and straight, however having his bleak view about the world around her, making at this point an anti-hero. Despite her brutality, Makina is far less twisted than Tamaki (whom she is greatly suspicious of) especially after discovering that her authority is limited.

Some time before the storyline, Makina joined the Special Forces, where she learned her swordmenship skills. There, she also befriended Ekō Kaidō, Kashima Toraichi and Bonbu.

She is first seen welcoming the prisoners to DW, including Ganta. She introduces herself as the chief warden. She then explains that DW is a special prison. She explains the full publicity and the touristic function of DW. She asks if there are any questions and a prisoner asks what her bra-size is. She replies that it's a G. She was just about to talk about the prisoners' necklaces, when Yō Takami bumped into Ganta and stole his candy. Makina sees this and tells Yō that she'll overlook it if he gave the candy back. Yō pretends that he doesn't know what she is talking about and Makina says that he'll receive the according punishment, and slashes him across the chest. While Kasuga tends to Yō's wound, Ganta yells that Makina is insane. Makina responds by stepping on Yō's head and telling Ganta that, insane or not, reality is made to be unfair and unjust. She concludes by saying that he and the other prisoners have no chance of escaping their reality - Deadman Wonderland.

She is next seen in Tamaki's room, with him asking her if she did went a little overboard. Afterwards, she is seen explaining the functionality of the poison within the collar, as a prisoner goes insane. She explains that the prisoner does not have much time left to live, as the poison will kill him soon.

Later on, after her suspicions of Tamaki reach a high (Necro Macro had been mysteriously demolished), she and her assistant illegally sneak into Tamaki's office when he's preoccupied with entertaining Major Aohi. They come across his list of "potentials" and are interrupted midway, forcing the two of them to hide within a stuffed chicken.

Eventually, after learning Tamaki's agenda, Makina forfeits her position to hunt him down with the aid of some allies in Ganta and the other Deadmen. When it came to Makina hunting for Tamaki, she had previously met Karako after her escape and had the Worm Eater technology embedded in her sword. After the suicide of Tamaki, she came into possession of the data regarding the Wretched Egg, the Deadmen, and the Forgeries. 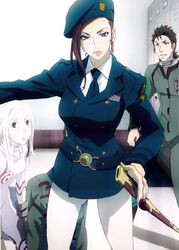 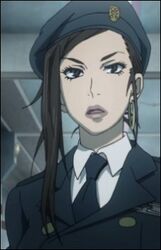 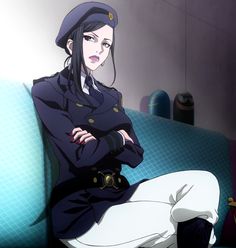 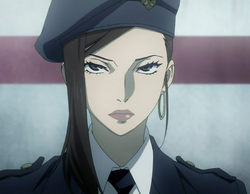 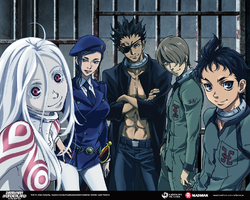 Retrieved from "https://hero.fandom.com/wiki/Makina_(Deadman_Wonderland)?oldid=1905082"
Community content is available under CC-BY-SA unless otherwise noted.