Kid
Mako is one of the protagonists of Digimon Tamers. He and Ai are both the partners of Impmon, but have little screen time compared to him.

He was voiced by Wendee Lee in the English version, who also voices MarineAngemon, and Miwa Matsumoto in the Japanese version.

Ai and Mako are both the partners of Impmon. For some reason, they didn't receive a D-Arc at first. Due to their young age, they did not understand the implications of having a Digimon partner, and treated Impmon like a toy to be played with, arguing over him and pulling him around like a ragdoll. Impmon was finally fed up with their immature behavior and left. His experiences with Ai and Mako shaped his opinions on humans and Digimon who have Tamers.

However, after suffering the consequences of his unfortunate deal with Caturamon and arriving back in the Real World on the Ark with the other Tamers, Impmon decided to find his old Tamers. He found them at their grandmother's house in Bunkyo, where they apologized for their behavior. After Impmon left them, they realized how childish they had been, and now promised Impmon that they won't treat him as a toy anymore, but as a friend. After a little tea party, Impmon saw on TV that his friends Guilmon, Renamon and Terriermon were battling unevenly with the D-Reaper; so, he wanted to battle once more, this time on the good side. Before he left, the twins wished him to return and Makoto gave Impmon a toy gun to help him defeat the D-Reaper, and Ai kissed him, which Impmon used to evolve to Beelzemon Blast Mode. Mako's gun was his metal enhancement while Ai's kiss completely purified Beelzebumon's heart and gave him now bright green eyes instead of the reddish furious ones.

After Beelzemon's attempt to save Jeri from the D-Reaper failed, Ai and Mako took care of Impmon. Only then did they receive their own shared D-Ark from the DigiGnomes, a sign that they now understood the meaning of the partnership with Impmon.

They later brought Impmon to the spot where the other Tamers met after the defeat of the D-Reaper. They saw him off as he de-digivolved into Yaamon and went back to the Digital World with the other Digimon. 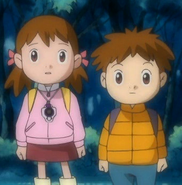 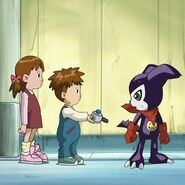