Heroes Wiki
Register
Don't have an account?
Sign In
Advertisement
in: Cartoon Heroes, Avatar Heroes, In Love,
and 28 more

Mako (The Legend of Korra)

Spending quality time with his brother and his allies.

Mako is a major protagonist from the series Avatar: The Legend of Korra. He is a firebender from a multicultural family who grew up on the streets of Republic City as an orphan with his younger brother, Bolin. Mako always wears his signature red scarf that was once his father's, who was murdered along with his mother when he was a boy. He formed a pro-bending team with his brother and Hasook, but eventually Avatar Korra joined the team and took the water bending position from Hasook. Mako, with the help of his teammates, was able to lead the team to second place in the championship. After the tournament's conclusion, Mako joined Korra in her efforts to stop the Equalists. He also helped Korra on other occasions, such as stopping Unalaq from freeing Vatuu and becoming the Dark Avatar, defeating the Red Lotus and stopping their goals of anarchy, and ending Kuvira's reign of her Earth Empire order.

Republic City was founded on a destroyed piece of land that needed to be tended to. As a result, it became an invitation for members of all other nations to join together to form the society. So like most citizens of Republic City, Mako is of mixed nationality, his father, San, was from the Earth Nation and his mother, Naoki, born in the Fire Nation. While Mako inherited his mother's looks and gained the ability to firebend, his brother, Bolin had more Earth Nation traits and sure enough also turned out to be an earthbender. Mako is older than his brother by two years. Mako would witness his parents death at age eight though, killed by a criminal firebender. With no way of knowing about, much less contacting his relatives, Mako became the patriarch of his family and his early life was spent searching for ways to support himself and his brother as orphans.

The only practical way for Mako to keep himself and Bolin fed was to resort to crime, petty at first, but later the two perfected con-games to make money without needing to resort to violence. His time as a con-artist attracted the attention of the gang known as the Triple Threat Triad. Mako worked mostly as a money collector and his time with the gang eventually saw him meet the Triple Threat Triad leader, Lightning Bolt Zolt, from whom he learned the specialized form of firebending known as lightningbending, where the heat expelled from one's chi can be made hot enough to reach plasma levels with proper emotional control which manifests as bolts of lightning.

Over the course of working for the Triple Threat Triads, Mako and Bolin discovered a scam where their colleague, Shady Shin had bribed a Pro-Bender - Benders who use their powers in regulated sparring matches as a sport. Bolin had encouraged the Pro-Benders, a man called Toza, not to throw the match out of altruism, Mako warned his brother not to interfere in Triple Threat Triad deals, but Bolin had his morals. Toza did not throw the match and Shady Shn and Zolt found out about Bolin's advice the Triple Threat Triads chased down the brothers. Toza came to help out the two and Zolt called off the beat-down, claiming the brothers were more trouble than the were worth. Toza was impressed with the skill of the brothers and offered to let them stay at his gym for free. The two began a new legitimate life, with a solid roof over there heads and the local gangsters now closed off to them. Mako got a job using his lightning and firebend at a forge and the two soon discovered they could win good pay-outs if they applied as Pro-Benders at the gym with Bolin's friend Hasook as their third the team of The FIre Ferrets, named after Bolin's pet Fire-ferret Pabu, which he intended to be the teams' mascot.

The Fire Ferrets rarely advanced far due to the ultra-competitive nature of the other teams. Finally one day, fed up with the team after taking most of the hits for the brothers in a match against the Golden Temple Tigerdillos, Hasook left in frustration. Korra, the Avatar - a heroic bender perpetually reincarnated with the ability to use all the elements, had watched the match and gone back stage to express her admiration of the team, but caught them just in time to see Hasook march off. With no waterbender the team would be disqualified, and so Korra leaped at her chance to join and fill in at the sport she had just discovered. Bolin was happy for the idea as soon as he heard it, but Mako was hesitant to allow a walk-in. With no other options though, Korra was allowed to join the team when Hasook did not return. Over the course of the match, Korra was revealed to be the Avatar when she was able to bend multiple elements. The referees initially stopped the match to consult, stating that bending multiple elements gave the team an unfair advantage, but as the Avatar was a historic hero, the referees did not want to upset the crowd and with no specific laws otherwise, it was decided Korra could participate as long as she limited herself to one element, in the match as a waterbender since the Fire-Ferrets already had an earth and firebender.

The Fire Ferrets won and Korra became a permanent part of the team. Mako and Bolin would find that Korra had just come to Republic City. She had come to train in air-bending with the only remaining airbenders, the son and grand-children of her previous incarnation, Avatar Aang. Her teacher, Tenzin, had tried to teach Korra, but she lacked the discipline and patience to even start training. Since Tenzin did not know how to train someone without an airbender mind-set, Korra and he were stumped. But Tenzin, who had come in to see the match, saw Korra adapt to bending styles needed in the heat of the match, leading Korra and Tenzin to decide that Pro-bending with Mako and Bolin was perhaps the best way of giving her the training she needed to adapt to airbending and become a full avatar.

The combination of Korra's prestige, Mako and Bolin's crime connection and a revolt starting in the cities underground by a group called the Equalists, the three soon found they were fighting more than just professional athletes and the Fire-Ferrets became embroiled in an adventure to save Republic City.

Mako had to give up his childhood to act as his brother's protector at age eight. As a result, he has grown up to be extremely stoic. While both brothers were concerned about money to get by, Bolin maintained a moral outlook on life and a desire to have fun, while Mako was far more concerned with utilitarian pragmatism. Mako has an emotional attachment to his scarf, which belonged to his mother, and refuses to part with it since it's his only keepsake from his family. However, he is capable of genuine kindness and has a protective demeanor.

Although he never forgot his roots on the street, Mako lost some of his hard-edge and became more considerate of others over time, as well as more emotionally forthcoming, as evidenced when he gave his treasured scarf to his grandmother, Yin, reasoning that she needed the reminder of her son more than him. His friends, family, and sense of duty remained the main motivation for his actions, making him willing to do what was necessary, even making the ultimate sacrifice, if it meant keeping the people he cared for safe.

Going with his hard edge, Mako has a wrathful side to him as well, having the capacity to kill or harm anyone who wrongs his brother and friends. This was particularly evident when he threatened an Equalist by raising a flaming fist when seeking information regarding Korra's whereabouts. His protective attitude toward his younger brother on the street in the years after their parents' death reflected this side of him as well.

Mako is very dutiful in his job as a cop, having arrested several triad members since joining the force, and was on the fast track to becoming a detective. Despite his coworkers' constant belittlement, Mako promptly suggests his theories on open cases and refuses to take the easy way out to close a case, being adamant in following leads. His commitment and effectiveness on the streets was such that he earned himself praise from President Raiko. His sense of duty also caused him to divulge information that would strain his relationship with Korra, ultimately ending it.

Mako's main ability is firebending. The angst he has built has lead to a deep-seeded anger that Mako can easily call upon at any moment. As anger is one of primary motivators for firebenders, Mako's ability to control or unleash his anger has made him a particularly effective firebender. Firebendnig becomes stronger when either anger or lust for freedom are behind it and as such Mako's tragic childhood has produced tendencies towards one with a longing for the other and the overlap of both motivations is what has lead to Mako's precise control of firebending. Aside from simply shooting flames, Mako can create solid shapes with fire, such as dagger like spurts of flame he uses as weapons or create controlled fields of flame. Firebending allows it's users to warm themselves with deep concentration, a trait Mako has learned.

Lightningbending is a relatively rare skill for firebenders but Mako is one of a handful that have mastered it. Though he can manifest his chi hot enough to be expelled as lightning, Mako mostly uses this discipline to redirect rather than shoot lightning. While fighting the Equalists Mako is able to use his lightningbending to redirect electricity from the latest technology that the Equalists are equipped with to avoid being stunned. Lightning is extremely hard to control as it requires deep understanding of the inner-warmth of one's chi as-well as a volatile nature to expel the necessary heat. Lighting is very potent but the ease to which it can harm those around one has lead Mako to avoid using it unless he is in a situation where possible causalities would be acceptable if he missed his mark.

As a Pro-Bender, Mako has highly-trained athletic traits such as accelerated agility, He is able to take a hit better than most grown men despite that fact he is only a teenager. As a former criminal Mako has picked up how to rough others up with shows of strength but this is more about technique and his strength is not particularly extraordinary, at most above average for his age.

Mako is shown to be good with paper-work and navigation due to his pragmatic life-style. Mako's girlfriend Asami Sato, is daughter of the industrialist, Hiroshi Sato and as such Mako had the opportunity to learn how to use the newest technologies. While Asumi's skill with these devices is superior, Mako's time with her saw him become adept at riding the newly created motorcycles. Perhaps Mako's most potent non-bending technique though is his ability to control his emotions either to remain cool-headed under pressure or go off at a moment's notice. His discipline was built in combination of his roles as his brother's guardian, his time in the Triple Threat Triads and his training as a Pro-Bender. 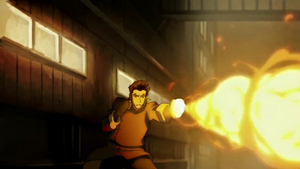 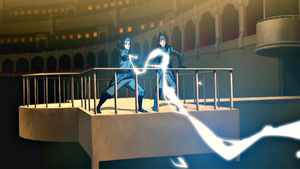 Mako uses lightning to distract Amon so he and Korra can save the airbenders.