Protecting Ryūko Matoi at all costs

Motivate Ryūko by making a speech about how she should have no reason to be ashamed of showing her body (succeeded)
Get to school in time after being tricked by Maiko during "No-Late Day" (succeeded)
Defeat Ryūko to keep her 2-star rating (while being possesed by Life Fibers, formerly)
Give up her Goku Uniform and stay as No-Star (succeeded)

Mako Mankanshoku is one of the main characters of the Kill la Kill anime and its manga adaptation. A goofy girl who attends Honnōji Academy, she is the best friend of Ryūko Matoi.

Mako is a teenage girl with brown eyes and brown hair that is styled in a bowl cut. She is often seen wearing her school uniform; a white short-sleeve shirt with a blue neckerchief, as well as a blue mini skirt.

Mako is a hyperactive girl who seems to cling to anyone she befriends, emphasized by how she becomes inseparable from Ryūko very quickly. She is also lazy, as shown in how she goes to sleep as soon as class begins, humorously clashing with her hyperactivity. Besides that, Mako is obsessed with wealth due to her poor background and is also obsessed with food, like the rest of her family.

Mako lives with her parents, brother and dog in the slums of the city. She spends her days as a no-star student of the Honnōji Academy. She befriended the transfer student, Ryūko Matoi, when she first arrived to the classroom. After Ryūko tried to assault the head of the student council, Satsuki Kiryūin, and fled the scene. Mako was captured because she was seen socializing with her. The Disciplinary group took Mako as a hostage and was saved by Ryūko before she was deep-fried in a tub of scorching oil.

After the battle between Ryūko and the Boxing Club Captain, Takaharu Fukuroda, Mako met up with Ryūko when her family took her in. The next day, she invited Ryūko to stay with her and her family as they walked to school. She was unfazed despite being relentlessly bombarded with a barrage of tennis balls to the face. Mako was apprehended by the tennis club captain, Omiko, for missing practice the day before, despite the fact that she was being held hostage at the time. Ryūko saved her as she was being tied up to a post and pelted on all sides by tennis balls. Mako made arguments against Uzu Sanageyama when he tried to fault Ryūko, which resulted in a tennis match between Ryūko and Omiko. Once the match was won, Mako fled with Ryūko under the cover of improvised steam.

When Ryūko was fighting a losing battle against Satsuki, Mako intervened between them and made an speech about how Ryūko should have no reason to be ashamed of showing her body, as well as commented that she and her family was talking about Ryūko’s body the night before. The speech motivated Ryūko to embrace wearing Senketsu and was finally able to maximise her potential.

During the event known as the “No-Late day”, Mako argued back to the Ira Gamagōri when he was questioning Ryūko choice of current attire, and the argument later ended with how he should be wearing pajamas; instead of sleeping in the nude unless he wishes to get sick. As Mako and Ryūko tried to get to class, they met up with the supposedly injured Maiko Ogure and allow her to join them out of kindness; however she later betrayed them and stole Senketsu as it was being delivered by Mako’s dog. After Ryūko beat up Maiko and reclaim Senketsu, they both learned that they were tricked once again by Maiko’s “fake school” trap; they were able to make it into the school in time by crashing into the classroom after commandeering a cable cart.

In Episode 7, Mako was given a Two-Star Goku Uniform by Satsuki. As her club was the "Fighting Club", the Goku Uniform is designed after a Bancho, and consisted of a black over coat hung over her shoulders. It had two red four-pointed stars to symbolize its rank on her belt. The coat was studded with gold metals around the collar and had red spikes from the shoulders. She also wore a black cap with a golden crescent moon on it. She had red spiked cuffs on her wrists and bronze knuckles engraved with the word "MAKO". Inside the coat are several golden weapons such as spiked ball-and-chain and a wrench. She also had a green reed in her mouth.

In battle, she uses her shoes to deliver powerful kicks and is able to send her impromptu weapons in a barrage against her opponent. She can use a chain to bind her opponent and slam the opponent around. As a close combat weapon, she uses a golden bat wrapped with bandages with nails stabbed into it. She can fire a high power missile out of that bat, at the cost of the bat shattering. She also uses her bronze knuckles to deliver punches. When punching with her full power, she is capable of making a giant crater in the ground and create a shock-wave that blew 1-star students and even the 3-star Elite Four away.

Mako has also displayed the ability to produce stagelights, props, diagrams, and shapes out of thin air. However, this is only used for effect. 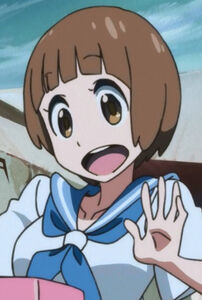 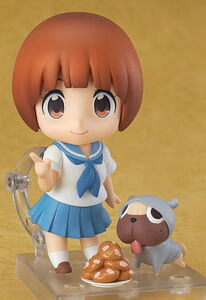 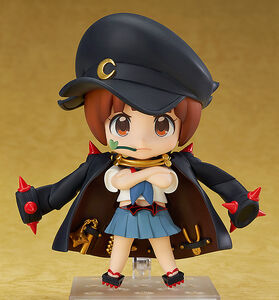 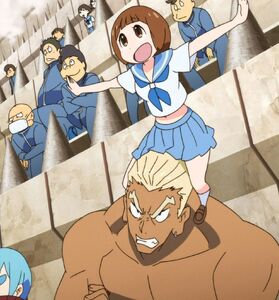 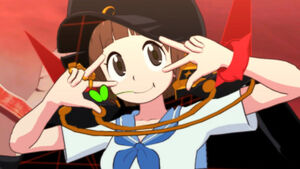 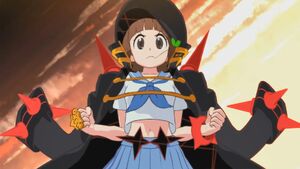