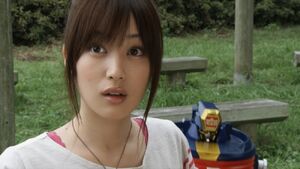 Mako Shirasshi is one of the supporting protagonists in Samurai Sentai Shikenger. She is the love interest of Ryunosuke Ikenami.

Mako Shiraishi formerly worked at a Kindergarten, she is extremely talented in calligraphy and she fights for her ideals. She already had her Origami, the turtle before being given her Shodo Phone by Takeru Shiba. Upon hearing Kotoha sacrificed to become Shinken Yellow in place of her ill sister, Mako gave Kotoha Hanaori a big hug. She likes men she can 'fix,' which attracts her to Ryunosuke Ikenami initially in Episode 4, but after he regains his confidence, she forgets about him. As Shinken Pink, she wields the wind as the Samurai of Sky. Raised to be a vassal as a little girl, she did not get to enjoy her own childhood. Chiaki and Kotoha both regard Mako as an older sister figure. Though a horrible cook, Mako tries her best in order to achieve her dreams of becoming a good wife. Mako is the kind of fighter to be suffering from a wound but tend to others' needs than her own. She sometimes has her doubts, that all that dreaming might be useless if they don't win. She sometimes wishes to be normal. After witnessing how Dayu went from human to Gedoshu in a dreamworld, she decides to give up on cooking and stay committed to being a Samurai. Hikoma makes her realize that if she doesn't have some flexibility, she is no better than a Gedoshu. She can borrow the Inromaru to become Super Shinken Pink, which she does first in Episode 29. Eventually, Mako is reunited with her parents and learns that her mother had become paralyzed from the waist down as a result of her tenure as the previous Shinken Pink. After the reunion with her mother, Mako gains a new found conviction to defeat the Gedoushu and a new found love for her mother. Due to her gentle nature, she can read other people well, especially Takeru, and gives her own opinion about what the situation, whatever it might be, is really about. After the final battle, Mako goes to Hawaii to live with her parents.

Retrieved from "https://hero.fandom.com/wiki/Mako_Shirashi?oldid=1952112"
Community content is available under CC-BY-SA unless otherwise noted.