Save and protect her friends.

Makoto Nanaya is a heroine and supporting character in the BlazBlue franchise. She is a former classmate of Tsubaki, Carl, Noel, and Jin from the Military Academy.

She is voiced by Tomomi Isomura in the Japanese version, and by Cindy Robinson in the English version.

She is a squirrel-type beastkin and is considerably hyperactive with a short attention span, though she has proven to be rather cunning when she needs to be. She is outgoing and adventurous. She has a few complexes about her race, but she acknowledges who she is and is proud of it. In Continuum Shift, Makoto works for the Novus Orbis Librarium Intelligence Department with Hazama but is a spy for Sector Seven. In the True Ending, she defects from the NOL after finding out what happened and leaves with Noel and Tager.

In Makoto's arcade ending in Continuum Shift II, it is revealed that one of the reasons Makoto is in Kagutsuchi is because she discovered the several failed attempts by the NOL to create Noel Vermillion at Ikaruga.

In Makoto's True Ending in Continuum Shift Extend, it was revealed that during Makoto's time in Ikaruga, she had discovered a computer that was still gathering data from the cauldron. She also found a file on the 12th prime field device created by Relius Clover and that it was none other than Noel.

Before Makoto could go back with the data she collected, the cauldron knocked her unconscious and sent her soul to a parallel world where she met an injured Jin and Hazama, who was out to kill Jin. They later met up with Bang Shishigami, who decided to heal Jin's wounds. She then met up with Tager and Kokonoe to give them a disk, but she failed to give Kokonoe the right password saying it was 'Gnu' when it was actually 'Baa'. Kokonoe asked her the date of the disk, and Makoto said it was January 3, 2200. Kokonoe said that disk was useless to them because today's date was December 31, 2199.

Shocked and confused, Makoto headed back to see Jin and found that he has escaped. She runs to the NOL where she met up with Tsubaki. Tsubaki told Makoto that she joined the zero squadrons just to bring Jin back, and when she was done, she was going back to the 4th Thaumaturgist Squad. This caused Makoto to remember that Tsubaki joined the Zero Squadron out of her own free will after graduation. Then, Hazama showed up and told them that Ragna the Bloodedge was here. Jin ran after him. Makoto told Tsubaki to go after him and that she needed to talk to Hazama. Makoto asked Hazama where Noel was, and Hazama said she wouldn't find Noel anywhere on the planet and that her sudden appearance messed up his entire plan. Before he could attack Makoto, Rachel jumped in and saved her, explaining the situation and how she can get back to her world.

After Makoto returned to her world, Rachel told her what caused her to travel back in time. Rachel pointed to the cauldron and three caskets of the failed clones of Noel Vermillion and told her that Noel is a human-made doll, just like Beastkin. Rachel asked Makoto what she plans to do now that she got to look at the truth that she was never meant to find out. Makoto said she was going to Kagutsuchi to save her friends.

In the spin-off manga, Remix Heart, Makoto was confirmed to be either bisexual or lesbian, due to her kiss with Mai Natsume.

After hearing Tsubaki is in Ikaruga from Kokonoe, she and Noel ran right out there.

Makoto is a silly, friendly, generally whimsical and energetic beastkin. She also appears to be somewhat scatter-brained, though this trait belies her true aptitude as an Intelligence operative and spy for Sector Seven. She is one of Noel's best friends, though unlike Tsubaki, she harbors no jealousy towards her. She cares deeply for her friends and can't stand when they fight each other. When she was in Military Academy, she used to be cruel, mean, selfish and hated humans, but then had a change of heart by Tsubaki's words when she confronted her fellow female classmates who were picking on her. When she, Tsubaki, and Noel were trapped in the lower levels of Kagutsuchi, it was revealed that she just wanted to be accepted for who she is. Makoto also has a serious side when it comes to her friends, and has even confronted Hazama when she discovers what he did to Noel.

During her arcade ending in Continuum Shift, she lashes out at Hazama for calling beastkins just mere tools created simply to fight the Black Beast, showing her dislike for being discriminated against. This is also revealed when Relius, during Makoto's bad story mode ending, messes up with her mind, recalling painful memories of being rejected and ostracized as a beastkin.

In Chronophantasma, while she likes Kagura Mutsuki as a person, she dislikes his lecherous behavior, which includes multiple attempts to flirt with her and Noel, offering the latter drinks which are implied to be alcoholic, and attempts to grab Makoto's breasts. In her special intro with Kagura, he tries to grope her, but she parries and punches him back in response.

Makoto is a squirrel-type beastkin young lady with short brown hair, a big curly brown tail, and hazel eyes. She wears an NOL uniform with a black balmoral cap to cover her squirrel ears, a jet black cloak, and black military boots. When she's in battle, she switches her outfit to an orange fighter top showing half of her bosom, two tonfas, blackstrap underwear with an orange skirt-like cloth, long black stocking, and orange boots.

When she was in the Military Academy, she wore a standard school uniform, only with a darker mini skirt, black stockings, and brown shoes.

As a child, Makoto wore a short orange top that bared her midriff and short black tights and is barefoot.

In Chrono Phantasma, Makoto does not her NOL uniform as her pre-battle anymore, but instead, she wears an orange collar shirt jacket with folden sleeves which were given to her by Kokonoe.

Because of her Beastkin heritage, Makoto has inhuman reflexes, as well as incredible strength, being able to make an impact crater in Carl's storyline, and her Astral Heat involves her punching an opponent skyward, leaving an imprint of her fist in the moon before it splits apart. The increased strength, however, may be the result of her tonfas, which allow her to charge the strength of her blows.

It was also stated in the anime that she was specially admitted into the Military Academy for her athletic abilities. 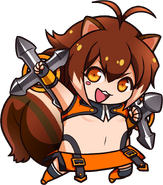