Studying, Hanging out with his friends, Training in Tartarus

Eliminate the Dark Hour, Prevent Nyx from destroying the world (both succeeded)

Tragic Special Agent, Destiny Defier, The Messiah
Makoto Yuki (named Minato Arisato in the manga) is the protagonist and player character of the PS2 video game Persona 3 and the PSP adaption Persona 3 Portable. He is a member, and the eventual leader, of the Specialized Extracurricular Execution Squad, an organization dedicated to destroying Shadows.

He is voiced by Akira Ishida in the Japanese version and Yuri Lowenthal in the English version.

The protagonist has dark blue hair and a light build. He is shown often with his hands in his pockets (except when holding weapons), leaning slightly back. At school and in Tartarus, he wears the school uniform of Gekkoukan High, accented with a loose black bow tie, a neck-strap mp3 player (NW-S20x series), and clip-on earphones (model ATH-EM700). On weekends off he is shown wearing a light grey double-breasted jacket, dark pants, and a khaki turtleneck sweater, along with his earphones. On summer days off he is shown wearing a blue-and-white t-shirt and jeans. He is never seen without his earphones except when he goes to the beach during summer vacation.

In 10 years before Persona 3 when he was a young boy he has slightly short dark blue bangs hanging just above his right eye, he wears a navy blue elementary school uniform, a red tie, short black pants, white socks, and navy blue shoes.

The protagonist of Persona 3 is a silent protagonist aside from technically speaking in battle in certain instances. While being a silent protagonist, he is very stoic, reserved, and calm gathered by the fact that he remains unmoved when guns are pointed at him. His personality is being distant to others because he only observes the conversations of his party members and only speaks when someone is directed at him for his opinion on the matter. His personality is ultimately based on the player's actions and decisions.

The Protagonist in Persona 3 is first seen departing for the Dorm in Port Island. During that time, he experiences the Dark Hour, and is confused upon the sudden change of the surroundings and the sudden halt of his earphones functioning, though he takes the hour in stride, seemingly unaffected. Upon reaching the dorm, he encounters a child, who promptly gives him a signing contract, giving players the opportunity to name him. The Protagonist transfers to Gekkoukan High School on the next day, and befriends Junpei Iori. His invitation to study as a transfer student is later revealed that due to his capability to adapt to the Dark Hour, he was moved to the co-ed dorm so his potential can be monitored.

During a full moon, one of the Shadows attacks, causing the Protagonist to awaken his initial Persona, Orpheus. The summoning sequence, however, was halted as Thanatos bursts forth from Orpheus' head, tearing apart Orpheus and slaying the Shadows. After dispatching the remaining Shadows, the Protagonist fainted and was taken to the Hospital. While unconscious, he awakens in the Velvet Room, where he learns about his abilities. The Protagonist later learns about the nature of the Shadows and the existence of SEES, and eventually joins SEES. Out of all characters to appear in Persona 3, the Protagonist is the only character with access to the Wild Card ability.

In SEES' final confrontation with Nyx, the bonds he has forged with SEES and his other friends give him power to fight the sorrow, depression, and apathy of humankind, which were what drew Nyx to Earth, by letting him create The Universe Arcana with the help of Igor. With the power of the The Universe, and the cheering on of his comrades he ascends to Nyx' true body, the moon, to combat Nyx itself in a one-on-one battle. He reaches his full potential and uses the final arcana, The Universe, to perform the Great Seal, creating the miracle of sealing Nyx.

The Protagonist clings to life for one month after fighting Nyx, and he, unlike the others, retains his memories regarding the Dark Hour and Nyx, in order to keep the promise he made to meet his friends on Graduation Day. Once his oath is fulfilled, he falls asleep in Aegis' lap, smiling.

In the playable epilogue of Persona 3:FES, titled "The Answer," it is revealed that the Protagonist died the day after his sleep, leading to the members of SEES confusion regarding his cause of death, as the doctor cannot find any unusual symptoms before his death.

After the defeat of Nyx and the death of the Protagonist, Aigis was the one who kept his Evoker, upon witnessing the Abyss of Time, the remaining members of SEES encounter a recurring silhouette resembling the Protagonist. However, whenever they come into contact, the silhouette flees.

It is not until venturing to the deepest area of the Abyss of Time, that the silhouette is revealed to be a shadow resembling the Protagonist's appearance. It manifests through the negative emotion and urge of seeing the protagonist one more time deep within the members of SEES. Making its entrance, the shadow challenges SEES and copying their personae, retaining the Wild Card ability, and several attacks of the protagonist.

The "real" Protagonist is later seen in the past, where he seals Nyx. In order to seal Nyx, the protagonist sacrificed his life to become the Great Seal. He was, however, capable of retaining his consciousness long enough to fulfill his oath between the members of SEES to meet again on Graduation Day. The protagonist is shown as a statue, crucified and bound to the door between Nyx and humanity. It is later revealed that the Protagonist's goal was not to seal Nyx, but an attempt of sealing Erebus, a grand being manifested from humanity's grief and negative emotions, from contacting Nyx to bring the Fall. Realizing his purpose, the remaining members of SEES swore to help him bear the burden by making the most out of their own lives. The Protagonist is briefly mentioned in Persona 4 in a conversation between the Protagonist of Persona 4 and Margaret. Margaret states that her sister, Elizabeth, left her position as Igor's assistant to find a way to free "The Blue-Haired" boy from the seal. 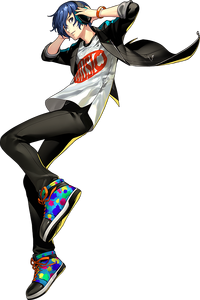 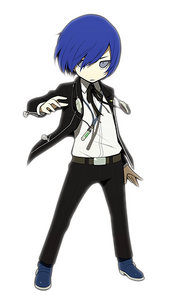 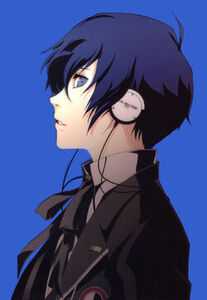 Artwork of Makoto from Persona 3 The Manga.
Add a photo to this gallery

Retrieved from "https://hero.fandom.com/wiki/Makoto_Yuki_(Persona_3_Protagonist)?oldid=1939972"
Community content is available under CC-BY-SA unless otherwise noted.