Malamar (known as Calamanero in the Japanese version) is a Dark/Psychic-type Pokémon introduced in the Generation VI of the Pokémon franchise. It is the evolved form of Inkay.

Malamar is a dark-purple squid-like Pokémon. It has a pair of tentacles on the bottom of its body that function as its legs. Malamar's main body has six light-yellow spots on the front and back and a light-yellow stripe nearly wrapping around its body above the spots. Its arm-like tendrils have grown scythe-like in appearance. Malamar has a red beak, black eyes with yellow irises and wavy "hair" made of eight tentacles. It possesses strong hypnotic powers, which it uses to force others to do its bidding. It can lure prey with hypnotic motions before it wraps its tentacles around the prey, then it finishes off with digestive fluids.

In Facing the Grand Design!, it shows six Malamar who are good and gentle to wild Pokémon and humans. These Malamar are shown to be protectors of humans and Pokémon who roam around the forest they live in and would fight for freedom, peace, honor and justice whenever there is danger. For example, when Ash Ketchum, Pikachu, Officer Jenny, Dedenne, Bonnie, Serena, Jessie, and Wobbuffet were kidnapped by the three evil Malamars who plot to take over the world, they joined forces with Clemont, Meowth, and James to rescue everyone and stop them from fulfilling their dark plans. Another example is when the evil Malamar captured Clemont, Meowth, Inkay, and James, blasted a Hyper Beam attack at the forest Pokémon, and tried to persuade the good Malamar into joining the evil Malamar's plans of conquering the world, they did not take the evil Malamar's merciless behavior very lightly and rebelled against it to protect everyone. 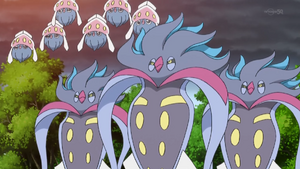 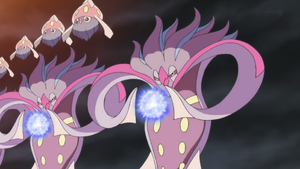 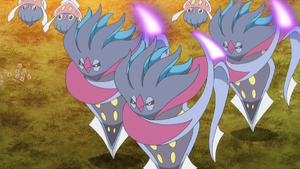 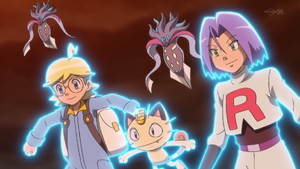