Heroes Wiki
Register
Don't have an account?
Sign In
Advertisement
in: The King of Fighters Heroes, Female, Honorable,
and 35 more

Malin is a heroine in The King of Fighters video game series, originally appearing in The King of Fighters 2003. Her addition to the KOF series was made due to Choi Bounge's absence in the game of her debut. The game producers state that her name should be spelled as Malin and not Marin, adding that "this is the humble preference of the supervising designer and a mystery to us all".

Malin is a mysterious girl from an unknown organization that collects intelligence. Since Athena and Hinako refused to cooperate with people they had barely seen, she skillfully stole the ribbon from their hair and left a calling card around Hinako's ribbon.

She apparently curated the anti-Kyokugenryu Team with her teammates Kasumi Todoh and Eiji Kisaragi in The King of Fighters XI, because of her hostility towards a styled practitioner, Yuri Sakazaki, who called Malin's fighting style "cowardly." Because of her expertise in spying, she usually takes the initiative to spy on Kyokugenryu karate practitioners. At the end of their team at the end of XI, Malin arranged a battle with Kyokugen practitioners, but later on she was knocked out by the angered King.

She or at least one person with her name was previously mentioned in the series as a member of the Athena's fan club. She has a good relationship with the White Tigers. It is said that her organization members also attacked Mai, King, and Mary in 2003 for an unexplained reason. Malin reported the bill for their replacement hot dog because their last hot dog was destroyed during the attack.

Malin is a spoiled girl always trying to get what she wants. Aside from the assumption that she is usually on some sort of mission, her real motives for being in the tournament remain unclear. She is prideful of her abilities and easily upset when she's underestimated.

She also seems to enjoy being sneaky and mischievous and easily offended by petty comments, such as how she easily and for long developed a grudge against Yuri Sakazaki for calling her fighting style "cowardly". 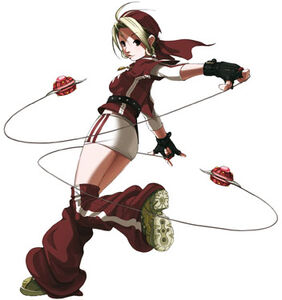 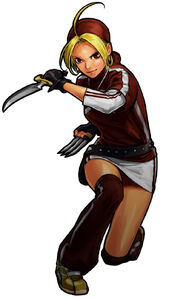