Help Mario in his quest.

Reunite with his biological family. (all succeeded)

Prince
Mallow is one of the five main protagonists of Super Mario RPG: Legend of the Seven Stars. He is also the de jure prince of Nimbus Land, as well as Mario's first partner in the game. In battle, Mallow isn't especially strong physically; however, he has a strong command of magic, including the ability to heal. All of his special attacks are weather-based.

Mallow is an yellow Nimbus who wears an blue and white pant with brown belt and pink shoes.

Mallow appears in Super Smash Bros. Ultimate as a advanced support spirit that grants the user stronger trade-off attacks when used. His spirit can be summoned by using cores from Prince Peasley and Kracko. His spirit battle is on the Magicant stage against three Robin who have increased powers magic on magic attacks and favors neutral specials. 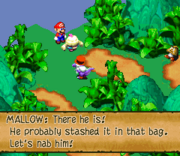 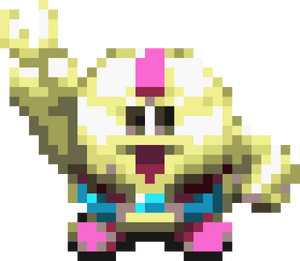