Shard of the Monolith

Fortress
Weapon against the Void (both formerly)
Order enforcer

Wandering across Runeterra
Smashing his enemies

Protect the Runeterrans the Void (both ongoing)

Malphite, also known as Shard of The Monolith, is a heroic playable champion in the multiplayer online battle arena game League of Legends.

Malphite originated as a magical Ixtali fortress known as the Monolith made of living stone, created to fight the all-consuming forces of the Void. However, the Void damaged the Monolith to the point where it outlasted its ability to rejuvenate itself, causing the entire fortress to crash to the ground. The only part of the Monolith that survived was a single shard of rock, which came alive and grew into the giant now known as Malphite.

The 34th champion added in the game, Malphite was added on February 9, 2002. He is often played as top, middle or support.

While voiced by David Sobolov in Legends of Runeterra, his voice actor in League of Legends is unknown.

When Icathia rebelled against the all-controlling powerful empire known as Shurima, they unleashed the power of the Void to Runeterra to stop their oppressors, but had unwittingly unleashed a force that they could not control.

The Ixtali Ascended Ne'Zuk promised to the emperor to create a weapon strong enough to destroy the Void from where it came from. After months of inhuman labor, Ne'Zuk created a fortress named the Monolith, a fortress made of living stone loaded with weapons strong enough to eradicate the areas corrupted by the Void. The Monolith was piloted to the ruins of Icathia, where a beam was fired that effectively destroyed the tainted area. However, the Void fought back and corrupted the stone of the Monolith, becoming twisted malphite (an Ixtali term for "bad stone").

Despite the fortress' rejuvenation abilities and Ne'Zuk's confidence, the Void was too strong and the Monolith began to fall. It crashed onto the land, where nearly everyone on it perished except for Ne'Zuk, who fled. The only portion that remained was a single shard of the Monolith's rock, which grew sapient and began to build itself until it turned into a colossal giant of living stone.

The newly-formed Malphite was lonely, and now roams across Runeterra. It still remembers the purpose Ne'Zuk gave him: to fight the Void, and it is prepared to fight the forces of the Void to protect the people of Runeterra.

Malphite as he appears in Legends of Runeterra.

Artwork of Malphite from "Roots of a Poisonous Tree". 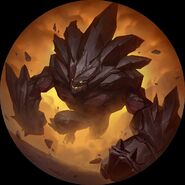