Voodoo Queen of the Bayou

Mama Odie is a kindly visually-challenged old voodoo priestess who lives deep in the swamps of Louisiana. She is a supporting character in Disney's 2009 film The Princess and the Frog, where she acts as the film's Fairy Godmother. Mama Odie has a pet snake named Juju.

She is voiced by Jennifer Lewis who also voiced Flo in Cars.

Mama Odie is an eccentric, sunny, wise woman who has great power and does not use it to grant wishes. She challenges Tiana and Naveen to 'dig deeper' in themselves and uses the same advice on all the individuals that seek her out, looking for a 'better' life via magic . Mama Odie is a well-known woman throughout the bayou; Louis the Alligator refers to her as the "Voodoo Queen of the Bayou". Though incredibly sweet and motherly, Mama Odie appears to be greatly feared by others. Louis himself had a fear of her prior to the events of the film. The dark magic voodoo demons working with the evil Doctor Facilier were also shown to fear her, as her good magic is able to eliminate them rather easily.

Mama Odie's closest companion is her snake Juju, who acts as her assistant, constantly helping the woman with various tasks throughout their home. Being blind, Mama Odie can usually find herself in comical peril in her tree house home, only to be saved by Juju. Mama Odie's love for her snake is shown several times, treating him as her own child many times. Mama Odie also appears to be good friends with Ray the Firefly and his family prior to the events of the film, admiring the spunk of Ray's grandmother, especially.

Mama Odie is also said to be 197 years old. Whether or not she is immortal is unknown, but judging by her immense power, it could very well be the case.

Mama Odie has the sensibility of a zany grandparent—warm and nurturing, but also talkative and easily-distracted. She is very casual, never presenting herself as a knowingly all-mighty figure, despite the amount of power and intelligence she holds. This makes her rather unique for a sage figure, specifically in terms of how she utilizes her abilities to assist others. Rather than simply using her magic to grant other's requests, Mama Odie challenges her visitors to look beyond their materialistic desires to hopefully realize that, while reaching one's goals are important, sacrificing love and relationships in order to do so, is misguided. This is notable in her words to Tiana; she alludes to the fact that her father worked tirelessly to achieve his goal of opening his own restaurant, and although he died before he could, his life was still remembered as a joyous one, due to the strong relationship he shared with his family and neighbors, proving Mama Odie's words of wisdom.

Overpowering Dr. Facilier, Mama Odie is the most powerful character in the film. She holds control over mystical elements including magic, voodoo, and nature to some degree (as she can communicate with animals), though she rarely uses it, unless necessary. Her primary source of powers seems to be light magic, which she conjures up from her club-esque wand. Also, with said wand, Mama has the power to transform creatures at will, as seen when she transformed Juju into a dog, pig, cow, and goat. Additionally, she also has the ability to summon objects out of thin air, as seen with her wand, and again when she showered Naveen in gold coins from her sleeves.

As mentioned above, Mama Odie is known for her wisdom. A trait that relates to her apparently physic abilities. Without having met Tiana, nor Naveen, the kindly voodoo priestess knew of their history, likes, dislikes, family relations, desires, and necessities.

Other abilities featured include conjuring items from nowhere at will, the live creation of mental visions, and ownership over an all-seeing/all-knowing gumbo pot, which acts as both a cooking pot and magical cauldron.

After becoming frogs through the magic of the evil Dr. Facilier, Tiana and Prince Naveen team up with a firefly named Ray and an alligator named Louis to find Mama Odie so she could help break the curse. However, the evil Doctor requires the blood of Naveen as part of his plot to dominate New Orleans and sends out a horde of Shadow Demons to recapture him. In the middle of the night, Naveen is suddenly kidnapped by said demons. Fortunately, Mama Odie arrives just in time and uses her light magic to eliminate the monsters with ease. With them out of the way, Mama Odie takes the two to her home.

Inside, Tiana attempts to ask Mama for help, but the wacky voodoo priest is far too preoccupied with other things such as cooking and fixing up her gumbo. Not only that, Mama Odie knows that both Tiana and Naveen desire to be human again, but need something much more. She tries to explain to them just that through her gospel number "Dig a Little Deeper". The song's theme proves to be a failure, having Tiana believe she needs to work extra hard to get her restaurant, instead of following her heart and ease up a bit.

Since the song was a failure, Mama Odie decides to give the duo what they want and takes them to her gumbo pot brew where she locates a princess that will break the curse through a kiss from Naveen. The princess turns out to be Charlotte La Bouff, who is the "Princess" of the Mardi Gras parade, being that her father is the King. Mama explains that Tiana and Naveen only have until midnight to get to Charlotte, which is when Mardi Gras ends. With their task fully realized, the team heads out. Mama Odie does not appear again until the film's finale, where she uses the power invested in her to marry Tiana and Naveen at their wedding ceremony in the bayou after the two proclaimed their love.

Since Tiana became the wife of Naveen, she became a princess, thus when they kiss, the two turn back into humans, living happily ever after.

Mama Odie is mentioned by Tiana in the episode "Winter's Gift". According to the princess, Mama Odie was responsible for informing her of Princess Sofia's latest dilemma, prompting her to visit the kingdom of Enchancia to provide assistance by being called on by the mystical amulet of Avalor.

Concept art shows that Mama Odie was slated to appear in the canceled short Princess Academy. She was to be featured alongside other fairy godmother-figures from Disney animated films.

Mama Odie has a different role in the game. Here, she appears in the game where the player must drag the right color to their pots to make gumbo. 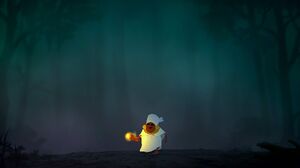 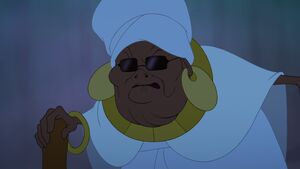 "Now, which of you naughty children been messin' with the Shadow Man?" 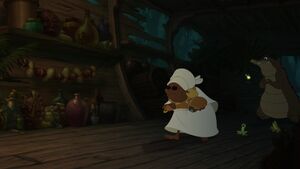 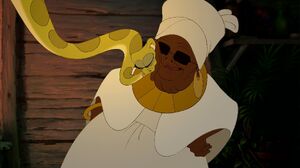 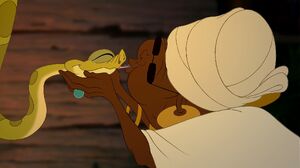 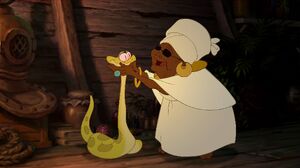 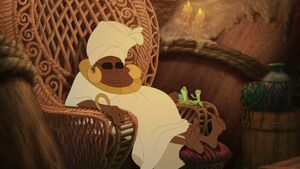 Mama Odie sitting on her chair. 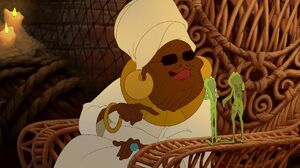 Mama Odie revealing to Tiana and Naveen that she knows they want to be humans again. 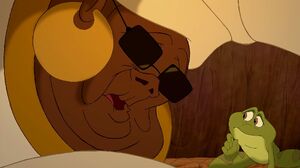 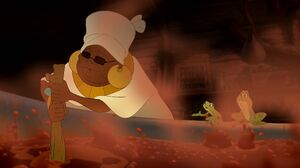 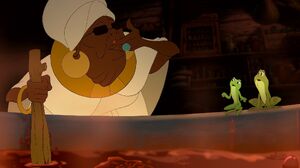 After receiving some cooking advice from Tiana, Mama Odie tastes her gumbo once Juju adds some sauce to it. 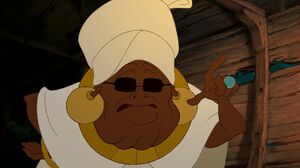 "Y'all want to be human, but you're blind to what you need." 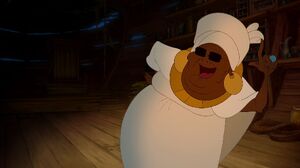 "You listen to your mama, now." 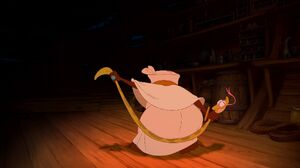 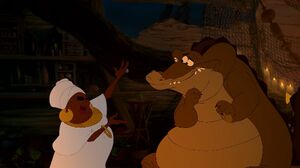 Mama Odie about to conjure up her wand. 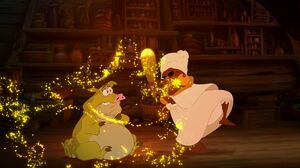 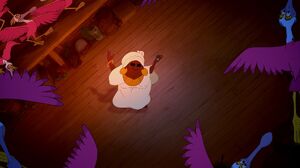 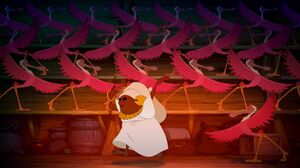 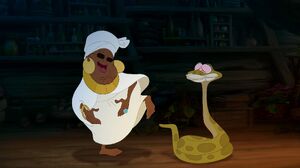 "It really ain't that far!" 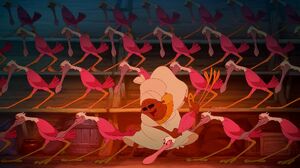 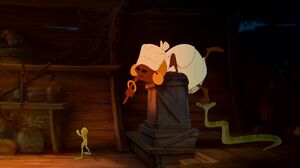 "Prince Froggy is a rich little boy! You wanna be rich again?" 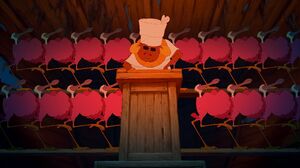 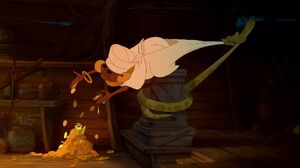 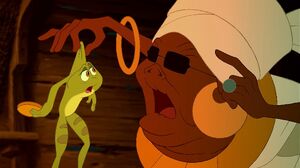 "All you need is some self-control! Make yourself a brand new start!" 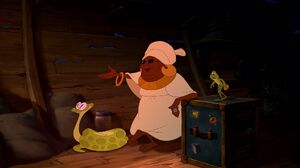 Mama Odie helping Naveen realize what he needs is Tiana. 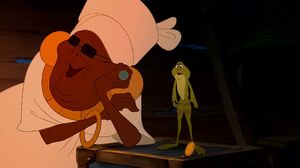 "Tell the people Mama told you so." 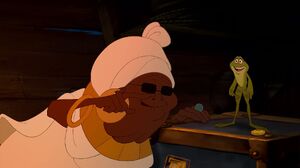 Mama Odie encouraging Naveen to accept his feelings for Tiana.