Protect the village from the Fang Clan.

Mamiya is a heroine in Fist of the North Star. She is a beautiful female warrior who bears a striking resemblance to Kenshiro's fiancée, Yuria. She fights using bladed yo-yos, Gabishi spikes, and a bowgun. On her twentieth birthday, her parents were slain by Yuda and she was kidnapped by him, having his brand (UD) tattooed on her back. She escaped and started a new life, rejecting her femininity and becoming a warrior to lead her village.

When the Fang Clan threatened her village, she hired Kenshiro and Rei as mercenaries for protection. The Fang Clan attack resulted in the death of her little brother Kō, her last remaining relative.

Mamiya was initially attracted to Kenshiro, but he did not reciprocate her feelings. At this point, she helps Kenshiro to find Toki and discovering that he is imprisoned at Cassandra. Also, Rei falls in love with her and kills Yuda during his dying days to avenge Mamiya's honor.

To respect Rei's last wishes, she gives up her life as a warrior and embraces her womanhood. After this, Mamiya reappears in the manga sporadically, during the Gento arc and again during the final arc of the manga. 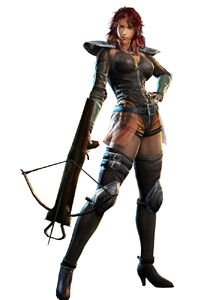 Mamiya in Fist of the North Star: Ken's Rage.
Add a photo to this gallery
Retrieved from "https://hero.fandom.com/wiki/Mamiya_(Fist_of_the_North_Star)?oldid=1858352"
Community content is available under CC-BY-SA unless otherwise noted.