He-Man and the Masters of the Universe

To Defended Castle Grayskull from Skeletor

Skeletor, Evil-Lyn, and others

Man-At-Arms is the primary title of Duncan, a character in The Masters of the Universe franchise.  The role of a Man-at-Arms in the government of Eternia was to advise the ruling planetary monarch and the Royal Guard on military and police affairs.

In the animated series, he is voice by Alan Oppenheimer.

Man-At-Arms was one of the defenders who fought also side Captain Randor in the war known as the Great Unrest against the warlord Keldor and his warriors. At some point his brother Fisto, who was fighting in the war, got injured and could no longer battle, but Man-At-Arms felt that his brother abandoned them, causing a fallout between him and his brother. During the end of The Great Unrest, Keldor and his warriors made an advance to the Hall of Wisdom, where the Council of Elders, the leaders and most powerful being in Eternia, reside. Keldor attempted to steal the power of the Elders and use to conquer Eternia, Man-At-Arms, Captain Randor, and the other defenders, attempted to warn the elders of the attack. Keldor's forces then arrived and Man-At-Arms and the other defenders began battling against Keldor's warriors, who were then forced to retreat after Keldor was critically injured by a vial of acid that he intended to throw at Randor, who defected it. After Randor ordered Man-At-Arms and the other defenders to follow Keldor's forces, they pushed back to Dark Hemisphere of Eternia, The Sorceress Of GraySkull helped them end the war by creating the Mystic Wall, to keep Keldor's forces from threatening Eternia again. At some the Sorceress revealed to him, that the Elders had transformed themselves into an orb that remained hidden within Castle GraySkull. Then later the Sorceress asked to raise infant daughter Teela for her, which he reluctantly agreed to. 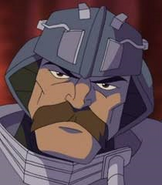 Retrieved from "https://hero.fandom.com/wiki/Man-At-Arms?oldid=1864440"
Community content is available under CC-BY-SA unless otherwise noted.