He first appeared in Savage Tales #1 in May of 1971, and was created by the late Stan Lee, Roy Thomas, Steve Gerber, Gerry Conway and the late Gray Morrow.

A scientist working on a way to recreate the super soldier serum that created Captain America, seemingly died when his lab in the swamp was destroyed by a terrorist bombing, only to reemerge from the swamp having been turned into a strange creature after exposure to the flawed super soldier serum.

Legend says that an ancient creator entity from before the dawn of time created beings known as Fallen Stars, created from its own thoughts. One Fallen Star, Clieto, was created on Earth and acted as the embodiment of the true nature of reality and in turn created Adam K'ad-Mon, and was the first "Man of Lineage."

The Life and Death of Ted Sallis

The early life of scientist Ted Sallis is largely unknown. He was a professor at Empire State University and was later recruited by the U.S. army for "Project Sulfur", which was looking to help soldiers survive chemical warfare. Though the serum Sallis created to combat the lethal effects of chemical weapons (called Serum SO-2) worked, it turned the soldiers into monsters.

Ted would later go on to meet scientist and war veteran Curt Connors and shared his idea of using nano-technology to recreate the super-soldier serum, which previously resulted in the creation of the superhero Captain America. Though Ted Sallis was unable to afford Curt Connors help in his research, he helped Curt Connors with his study of lizard DNA and gained some inspiration in moving forward with his ideas for a new super soldier serum.

Sallis would return to teaching and would meet a student named Ellen Brandt. The two ended up in a secret affair and ended up eloping.

However, he was betrayed by his lover, Ellen Brandt, and Sallis had to flee from A.I.M. agents, who saw their potential of such a formula for their own evil ends. He injected himself with the serum, but after crashing in a swamp and apparently drowning is transformed into a swamp creature through a combination of his formula and, as later explained, magical forces extant in the area. Sallis' mind was apparently lost, although on rare occasions he could briefly return to consciousness within his monstrous form.

Despite losing his conscious, Man-Thing had committed heroic acts, such as fighting Thog the Nether-Spawn, and aiding superheroes such as Thing, Iron Man, Hulk and Thor in fighting Molecule Man, Bi-Beast, Man-Beast and the Collector. He has however been a pawn to numerous supervillains (e.g. Baron Mordo) to defeat their enemies, but is usually freed form their control. 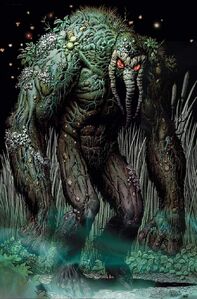 Retrieved from "https://hero.fandom.com/wiki/Man-Thing_(Marvel)?oldid=2092409"
Community content is available under CC-BY-SA unless otherwise noted.