Manjimutt is a dog with a human face. He has chocolate brown fur, tan skin, a green ghost-like swirl atop his head and another as a tail, and small poodle paws with pink paw pads. He wears thick, black rimmed glasses. He has a dull red stripe on his face and his left eye is partially shut.

Manjimutt is shown to lament his afterlife, due to the fact that he is still treated as a normal human and not as a normal dog like he expected. Initially, he has a fair grade of low self-esteem due to being fired from his work when he was alive and resorts to spending his afterlife in the street bar which he considers his new home. This is quickly dispelled when Nate summons him to confront Roughraff and tells him that he is one of the few adults he can trust in dire moments.

Though a hard-worker, Manjimutt is an extremely incompetent planner. His attempts at breaking into photography and pottery both failed because he attempted to hijack those jobs from other people; sneaking into a photography studio and pottery shop, seemingly intent on jump-starting his career only to be reminded by police that he's breaking and entering. He's also a pervert, with his lust for women being his primary drive and the reason for his hasty decision making.

Manjimutt's ineptitude is even further cemented by the fact that he completely forgets that he's a Yo-Kai. He's unable to even perform the basic Yo-Kai trick of being invisible to humans, and multiple times he fears being killed by an incident, while forgetting that he's already dead.

Beyond his incompetence, Manjimutt frequently finds himself at the mercy of his canine instincts; being unable to stop himself from digging holes in gardens, urinating on telephone poles, howling at the moon, and stealing food from plates.

During his time in prison, Manjimutt's sanity begins to degrade as he begins to suffer from delusions; namely that a teddy bear he got for Christmas can walk and talk, and that a group of abusive inmates are his good friends.

Manjimutt used to be a human man. He died the day he was fired from his work as a local salary man due to budget cuts. He went out to drink to drown his sorrows. While he was drunk, he accidentally bumped into a pile of wood planks. A brown toy poodle came over to him and barked, not noticing the falling planks. The heavy planks fell on both him and the poor poodle, merging the two together into a Manjimutt spirit.

He first meets Nate and Whisper in episode 3. Later in the episode, he is summoned to confront Roughraff.

In episode 4, he was accidentally summoned to confront Wazzat.

In episode 5, he was summoned to confront Illoo, but he falls for an illusion where he is loved by many girls.

In episode 8, he was summoned to confront Fidgephant; but he gets inspirited, pees near the road, and gets arrested once again.

Manjimutt attempted to get a new job, but a myriad of incidents resulted in him being arrested several times and eventually sent to Alcatraz.

Awhile afterwards, Manjimutt reappeared in episode 32, but was scared away by a wanting-to-be-in-a-magazine Nate. It may not be entirely explained how he managed to get out of Alcatraz in between the time of his absence.

After 33 episodes of summoning hiatus, Manjimutt was summoned in episode 41 in order to defeat Shmoopie. With Shmoopie's power, Manjimutt tried to appeal to girls passing by, but only to get severe beatings from them. In the end, Shmoopie admits defeat and Nate gets his medal. Shmoopie compliments Manjimutt because the man-faced poodle's ugliness "is so godly." Nate thanks Manjimutt, saying his grossness came in handy. Jibanyan calls Manjimutt gross causing the latter to tell Nate to "LEAVE ME OUT OF THIS!" 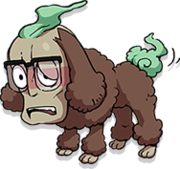 Retrieved from "https://hero.fandom.com/wiki/Manjimutt?oldid=1921320"
Community content is available under CC-BY-SA unless otherwise noted.