Manny is a character from the 1998 film, A Bug's Life. He is a praying mantis with an English accent who is Gypsy's husband and one of the members of P.T. Flea's circus troupe. His magic act involves the 'Chinese Cabinet of Metamorphosis', which is really a Chinese food take-out carton. His magic act is not appreciated well by the flies in the usual audience, but the grasshoppers take it seriously when he is set to distract them. He is also the magician of P.T. Flea's circus troupe.

He is voiced by the late Jonathan Harris.

Manny is very kind and courteous to other insects, especially the ants on Ant Island and the other circus troupe. At first, Manny was bellicose and crabby towards Flik, but he starts like him and in the end, he convinced Flik to go back to the colony because he needs to help save the Queen from being killed from Hopper.

He also dislikes being mocked as he gets angry with anyone who mocks him.

Manny is an elderly green, slender and handsome praying mantis who is half red as there are red parts on his legs and arms. He also resembles Zorak from the Cartoon Network series, Space Ghost Coast to Coast and Cartoon Planet. 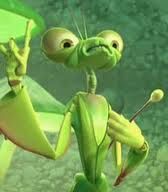