Manny Armstrong is a Plumber's kid introduced in Ben 10: Alien Force. His appearance and powers are similar to Four Arms, though he's a lot smaller than a normal Tetramand. He is an alien hybrid

In Alien Force, Manny was indistinguishable from a regular Tetramand with the exception of his head, which seemed more oblong, and height. He wore a sleeveless black-green outfit, black wristlets and black pants with green pockets.

In Omniverse, he has more humanoid traits. He has five fingers and he is scrawnier, especially his lower arms, and he now no longer has his robotic hand on his lower left arm. He also has a bigger chin and slightly darker skin color. Since he became an official Plumber, he wears a Plumber Suit.

Before his encounter with Servantis, he was a regular human. He was a thin, Afro-American kid with an afro. He had big, dotted eyes, thick eyebrows and dark lips.

After his amalgamation, he looked like a regular young Tetramand with more averaged sized eyes.

Manny is hot-headed and rebellious, often willing to fight even when it may be not necessary. He enjoys fighting, and can sometimes become rude toward his teammates, especially Pierce Wheels, who he doesn't accept as a field leader, and Alan Albright, whom he would like to be more aggressive. He also once argued with Kevin, and was shown to be the less respectful of the Plumbers helpers toward Ben. However, he is also shown to be devoted to Max, refusing to reveal his identity to D'Void and willing to help him when he was seemingly attacked by Ben. Despite their differences, Manny has shown concern with his team as he was willing to sacrifice himself so his team could escape (although he'd forgotten their ship had been destroyed).

Manny serves as Kevin's mirror on his team, and share many character traits. He is cocky, abrasive and has difficulty expressing his personal feelings. However, Manny lacks his mirror's laid-back attitude, often permanently angry and insulting to even his own allies, earning him the dislike of Kevin Levin and Ben and forcing Helen to act as peace-keeper. His anger has lead him to cross the line at times: in his first appearance, Manny tried to force Ben, Gwen and Kevin to reveal themselves as DNAliens by shooting the wheels off a nearby tanker. The tanker crashed by a fuel station and caught fire, endangering the lives of the driver and innocent bystanders. When confronted over this, Manny shows no remorse for the act, proving he is more concerned with fighting bad guys than saving lives.

Manny shares a love-hate relationship with Helen. While his hot-headed attitude, when confronted to Helen's wiser personality, cause them to often fight, he is shown to truly care about her, being once willing to attack Ben after he hurt her in Above and Beyond.

Manny possesses most of Four Arms's powers, which include enhanced strength, enhanced durability and four arms, along with a robotic prosthetic hand in place of his lower left hand.

In Plumbers' Helpers he is shown to be quite good at rock-climbing, able to scale a wall quickly without any problems.

Manny is quite capable of melee combat, and would gladly engage an enemy.

In addition to his powers, Manny usually uses four blasters as his weapon.

Manny seems to lack the speed of other typical Tetramands, which puts him at a disadvantage against faster opponents like Rath. 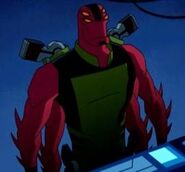