Mantis is a member of the Furious Five and a major character of the Kung-Fu Panda series.

He is voiced in the feature films by Seth Rogen, who also voiced B.O.B. in Monsters vs. Aliens and Morton the Mouse in Dr. Seuss Horton Hears A Who!, and in the cartoon series, Kung-Fu Panda: Legends Of Awesomeness, by Max Koch.

Like the rest of the Furious Five (except for Tigress) throughout the first film, he begins to warm up to Po. He was impressed by Po's wholeheartedness, even though Po knew Master Shifu was trying to get rid of him. Pragmatic and open-minded with a dry sense of humor, Mantis was actually the first of the Five to develop acceptance and liking of Po as a person, alongside the factor of Po's girth, declaring size did little to define a warrior and could actually be used as an advantage, no matter what style one practices. Mantis is a strong defender of this philosophy of his, noted to be a tad sensitive regarding his own small stature (demonstrated when he impulsively whacked two enemy wolves who called him "cute").

Mantis also appears to be the most outspoken of the Five and seems to possess a wry sense of humor, such as when Po was so startled by the appearance of Master Shifu (whom he had been impersonating) that the two soup bowls he had been holding got stuck to his chest, making it look like a brassiere, to which Mantis was seen struggling not to laugh out loud, along with Monkey. 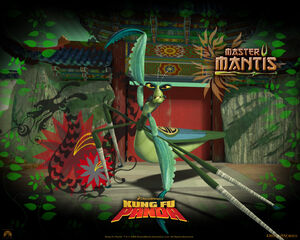 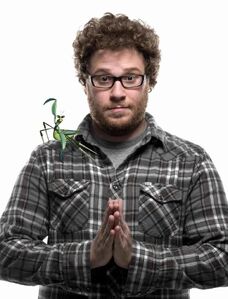 Mantis with his voice actor, Seth Rogen
Add a photo to this gallery

Retrieved from "https://hero.fandom.com/wiki/Mantis_(Kung_Fu_Panda)?oldid=2126640"
Community content is available under CC-BY-SA unless otherwise noted.