NOTE: This article is about the incarnation of Mantis from the Marvel Cinematic film series. The mainstream version can be found here: Mantis (Marvel).

Member of the Guardians of the Galaxy
Ally of the Avengers (formerly, team disbanded)

Aiding the Guardians of the Galaxy.

She comes from an unknown alien race of actual humanoid mantises, and has powers based on empathy. She was taken in and raised by Peter Quill's villainous powerful father, Ego. Since, she served as his assistant, but after meeting the Guardians, she grew disillusioned with his evil ways and joined them in destroying him.

In 2018, Mantis worked with the Avengers and Doctor Strange in trying to prevent Thanos from obtaining the Infinity Stones to wipe out half of the universe. The Guardians failed to stop Thanos on Titan, resulting in Mantis and half of the population being turned to dust. When the Avengers undid the decimation, Mantis returned and assisted her allies in stopping Thanos and his army. After attending Tony Stark's funeral, the Guardians reunited and welcomed Thor into their ranks.

She is portrayed by Pom Klementiff.

Mantis was born many years ago, as part of an unknown alien race of humanoid mantises with powers based on empathy. One day, she was taken by the villainous Celestial known as Ego, who raised her on his planet, and she assisted him in sleeping and more other things without knowing about his true colors.

As she got older, Mantis became increasingly aware of Ego's nature as a monster obsessed with universal cleansing and conquest, presumably due to learning about her adoptive father killing nearly all of his offspring for not inheriting his Celestial powers and hiding their skeletons in the caves of his planet.

In 2014, Ego got to know about the existence of Peter Quill (his biological human son), and found him on the forest planet of Berhert.

There, Mantis was introduced to the Guardians as the adopted daughter of Ego. That night the group sat around a fire and the Guardians talked with Ego and Mantis stayed quite for most of the conversation. Mantis then attempted to introduce herself to Drax by smiling at him which he thought was hideous. When Mantis asked if she could pat Rocket Raccoon believing him to be a puppy, Drax said she could resulting in Rocket trying to bite her which was all apart of Drax's practical joke which both of them found funny.

After convincing Quill to return back to they planet, Quill who was accompanied by Gamora and Drax joined Mantis and Ego onboard their ship as they prepared to leave Berhert. Onboard, Mantis tended to Ego separate to the others, using her empathic powers to induce a state of sleep upon Ego.

With Ego unconscious, Mantis took the time to converse with the Guardians of the Galaxy. As Mantis joined them, Drax the Destroyer and Peter Quill questioned her about her antennas and their purpose which Drax believed they were for protecting her from low levelled doors.

Mantis explained that she is an Empath and can read peoples feelings. She used her powers on Quill to reveal his attraction to Gamora, due to not be aware of the value of his privacy. This caused Drax to burst out in laughter which Mantis then adhered to Drax, and as a result, she shared in his amusement of the situation. Once the laughter had died down, Mantis tried to move onto Gamora, but was threatened with a broken jaw if she tried.

A while after the Guardians reached Ego’s planet, Drax and Mantis sit in front of the fountain. Drax asks Mantis how she got onto Ego’s Planet, and she tells him her story. Drax then refers to her as hideous, but assured her that she’s Ian lucky because of that. He tells Mantis next that she reminds him of his daughter. Mantis touches him, and begins to weep when she’s feels husband sadness. She is prepared to tell Drax something, when Gamora comes out of the commons area, and asks about what they were doing. Drax tells her that Mantis is his new friend. Gamora the next asks Mantis to show them to their quarters.

During the walk, Gamora asks about why there are no other lifeforms on the planet. Mantis tells her that it is because the planet IS her adoptive father, and that he would not allow any foreign thing to live on him. When Gamora states that Mantis is foreign, Mantis explains that she is their for a purpose: to help him sleep. Gamora then asks Mantis what she’s was going to say to Drax. Mantis nervously says that she wasn’t going to say anything, then changes the subject by telling them that their quarters were close.

Mantis overhears Ego talking to Starlord and beckoning Starlord come with him. She is frightened by this, and immediately goes to the person she’s trusted the most: Drax. Drax misinterprets her arrival, thinking that she harbors romantic feeling she for him. Mantis reassures him that this is not the case, saying that she’s doesn’t like the type of thing he is. She then tells him of Ego’s plans.

Gamora comes at Mantis and strangles her, asking about the skeletons in the cavern. Mantis realizes she is scared and tells everyone that the bodies are Ego’s offspring. She tells the story to Gamora, who then decides to rescue Peter.

Mantis comes with the Guardians to save Starlord and stop Ego from enacting the Expansion. She and the others rush into the quadrant. When Drax states that they handled Ego, Mantis states that he is only gone for a little while, and will be back soon. Starlord mentions a Corey that keeps Ego alive, and Mantis states that it is in the caverns bellow the surface. During the journey to the center of Ego’s planet, Rocket mentions that they will get even more money for this, Starlord tells him that they are doing it to save life. When Rocket says meh about saving humans, Mantis says that he isn’t so cute that he “makes her want to die.”

The quadrant crashes into an object, and this frightens Mantis. She’s then turns and walks towards the window. She’s points out Ego’s core. A shame the quadrant blasts into the core, Ayesha and a Sovereign fleet fire upon the quadrant, knocking Mantis, Gamora, And Drax our of the ship. The trio land on the ground safely.

Mantis notices that Ego is coming. Drax says to her that she can put him to sleep, but she doubts herself. Drax then tells her that he believes in her, and she puts him to sleep.

A laser from the quadrant comes dangerously close to Mantis’ hand. This frightens her, and Drax shouts up at it.

She is able to hold Ego asleep for a while, when a large rock collides into her, knocking her unconscious. Drax delayedly tells her to look out. He isn’t given an aero ring, and flies up to the shuttle with her. Ego attempts to kill them, but USB’s topped when Starlord clashes with him. Drax gets her aboard the ship safely.

Mantis is with the other Guardians. A newcomer to the team, she is at the funeral for Yondu.

A firework show made by the other Ravagers is performed. Mantis states that they are beautiful. Drax then states that’s she is also beautiful, then adds that she is so on the inside.

In 2018, Mantis and the Guardians respond to a distress signal and rescue Thor from floating in space. She then goes to Knowhere with Quill, Drax, and Gamora where she gets incapacitated by Thanos. Afterwards, she is told by a message from Nebula to go with Quill and Drax to Titan where they have a brief confrontation with Tony Stark, Stephen Strange, and Peter Parker before realizing they were on the same side. After Thanos arrives, Mantis's empathic abilities are used to briefly disable him, in an effort to get the Infinity Gauntlet off of his arm, which fails. At the end, Mantis disintegrates.

In 2023, Mantis is restored to life by the Hulk and is brought to Earth to the final battle against Thanos and his forces. She later attends Stark's funeral and leaves with Thor and the Guardians.

Mantis is a beautifully kind, lovely and caring being. She is managing to prove herself to be kind and mainly lovely, as she is treating the team of the Guardians so well, as well as joining the team in order to help them in their war against Ego. Mantis can be considered as "The Heart" of the team, alongside Groot. 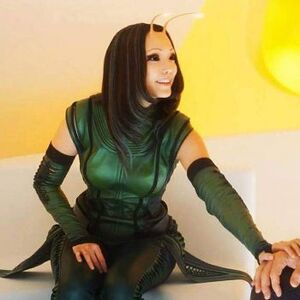 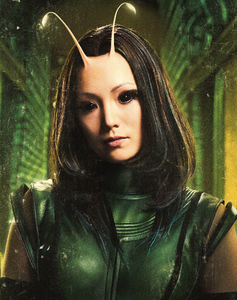 Mantis' character poster for Guardians of the Galaxy Vol. 2. 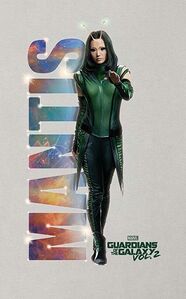 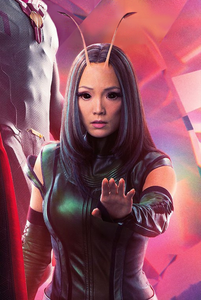 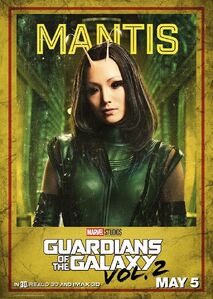 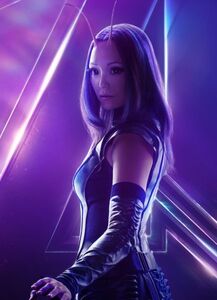 Mantis turning into dust in front of Peter and Drax. 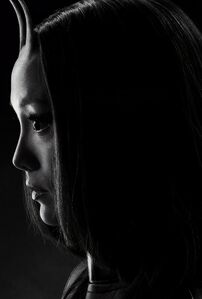 The Guardians of the Galaxy attend Stark's funeral.

In an interview, executive producer Jonathan Schwartz said “She has never really experienced social interaction, everything she learns about dealing with people, she learns from the Guardians of the Galaxy, which is a very weird group to learn your social intricacies from.”